I'm outside on the veranda typing this because it's beautiful
outside and I have two weenies that want some fresh air.
So while I'm typing this they are traipsing back and forth on the veranda
like swimmers doing laps in a pool..only without the water.
Then one will stop and lay in the shade and the other in the sun.

It's been a crappy spring and a crappy summer as far as
gardening goes. Wow. Our spring was freezing and wet.
Planting was done very late and it's September first and I still have no ripe tomatoes
outside in the beds. I did have the hindsight in planting some in
the greenhouse and they are doing very well.
This year we planted mini cukes in the greenhouse and we will be doing that again next year.
They are the perfect size.

The strawberries didn't do well this year. We only had one small crop with double
the plants we had last year.  We lost our lavender to the winter winds
so I had to replant some.  We didn't get much snow last year but the winds
never stopped!! Many people lost plants because of this.

The job is going well and I've been busy with that. There's always something
going on when you run a radio station.  Some ups and some downs. 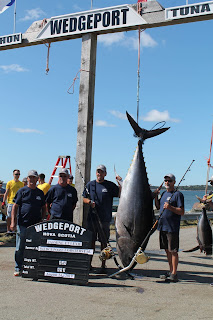 I had to attend the Wedgeport tuna festival.  Very interesting. I had never gone.  Very big fish and I got to taste some fresh tuna. It was pretty good. I also noticed that a boat came in with seaweed. It's cool how they unload it. 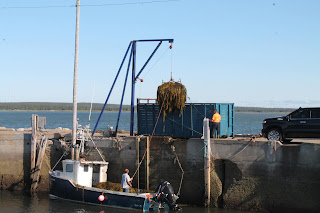 The crew is great and the rest of the people in
the building are also. We are all non profit organizations so
we are pretty much all in the same boat.
We've begun meeting in the communal kitchen once a month for a Nosh and Nag.
We bring food, eat and whine. It's awesome! Ha Ha

Jamie has graduated high school then went on to flight attendant academy
and before he even graduated from that he already had a job!!
So September 11th he's moving to Toronto.  Yikes!
He's going to do well. I think we raised him right.
So now begins the empty nest....
Gonna be weird.
Wasn't it only yesterday that he started primary school?
Hey wait...whoa! 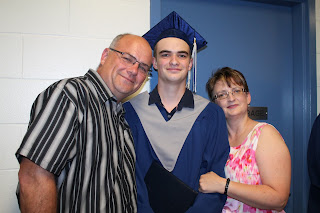 Oh and he did graduate from the academy with a 97% average.
So proud of him! 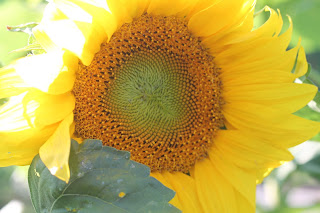 So on to garden talk.
Here's a few pictures of some of the stuff we gathered this year.
Most importantly HONEY!
We only have one jar and really we shouldn't even have that.
But we checked the hive and we had to clean some of the combs
so instead of throwing it away, we strained it and got honey! 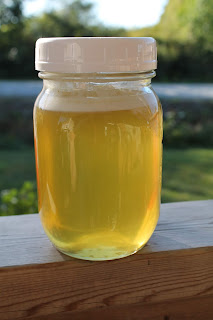 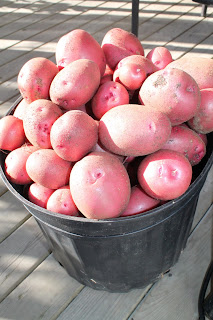 We also got some potatoes!! 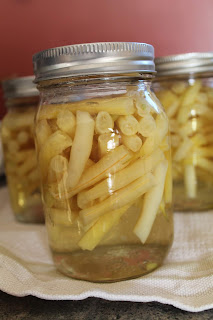 I bottled a few jars of yellow beans. 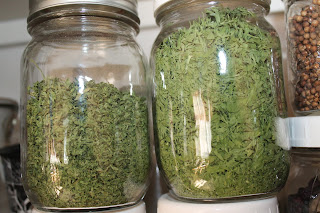 And had an over abundance of parsley so I dried it. BUT!!
I still have even more in the garden. So I'm going to collect it, dry it and give it as gifts to my foodie friends for Christmas....ya I'm weird like that.

As for exercise I haven't been doing much.  I've gained soooo much weight.  All because of my heel.
I'm waiting for the call to go for surgery. Then I'll be off my feet for 6 weeks and then a walking cast for another 6-8 weeks.  Lovely. But if it can stop the pain of the heel spur I'll
do anything.  I have tried everything there is but after 13 years it's just getting worse.
At least with the job I have now I can still do it. If I would have had my other job then it would
have been impossible to do the surgery.

Well that's it for now.

Have a Blessed evening!
Lisa
Posted by Lisa at 7:44 PM No comments: