Well, once again it's been non stop here. We are at that point that we are starting to wonder if it's all worth it. There's so much work and it just never stops. We don't have 2 minutes to ourselves. We have decided as a family tonight that we are going to set a day or evening where we are going to do something for just the family. The problem is finding that day.
Today was a beautiful day, as has been the last week. I hope that spring is finally here. The goats were happy outside and I cleaned out the chicks and the greenhouse. J. did the chicken coop. 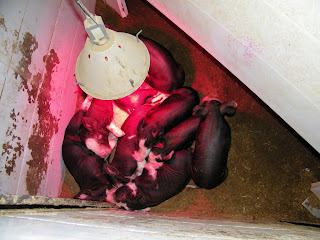 A pig pile! This was taken last week. They've grown alot since then.
The piglets are doing great. Someone came and picked one up after they were only one week old. We didn't guaranteee that one. The person understood. Dave finally made a door for Wilbur so he can go outside and divided the pen with electric wire. Now we know why people tell us to put a barricade on the OUTSIDE of the electric fence. When you train pigs to the electric fence they actually run into the fence if zapped. They don't back away from it like a normal animal. Twice did Charlotte run through it and broke it! Sometimes pigs aren't the brightest bulbs in the bunch. 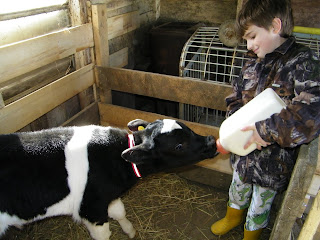 J. feeding Otis for the first time. He was only 3 days old in this photo.
Well Otis is here! He's the cutest. I have no idea how we are going to eat him this fall after bottle feeding him and cuddling him. I know we shouldn't...but how can we not! I mean look at him. He's got big beautiful eyes and such long eyelashes. 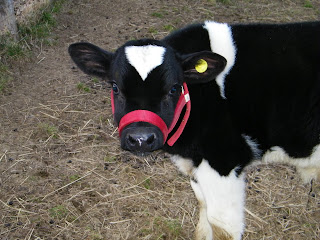 Otis and his first time outside.
I think this is the part I become vegetarian.
We've been bottle feeding him twice a day now and I've also started teaching him how to eat grain. He prefers slobbering all over me than eating the grain at the moment. Esme and Whisper at the chow hole.
Esme and Whisper are now forever buddies. I have tried putting Febe in, but she terrorizes the poor things. Even outside she bullies her. I'm not liking that. J. is having a ball, though. They love him especially when he shows up with treats! 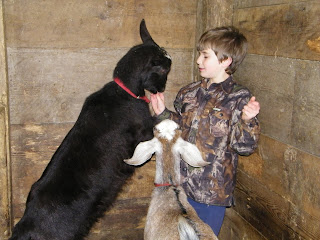 J. and his friends!
After much anticipation we have a grand total of 19 chicks! I put 53 to hatch and we had 20. One died after a day. This might not be a good average, but compared to last year it's fabulous! Last year I put 30 eggs twice and got only 3 chicks. We were so disappointed. So 19 is pretty good. 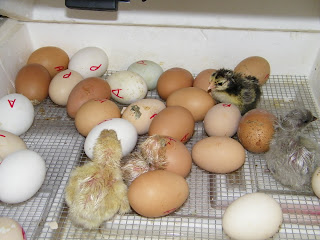 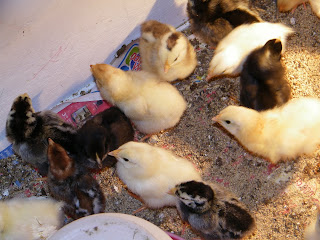 Hatchlings a few days later.
Last week they demolished 3 buildings from our downtown area. It's really sad to see them go. They've been there for 60+ years. They were ready to crumble since nobody was taking care of them. Most of the buildings in Weymouth are built over the water, so they're on cribbing. Needless to say if it's not taken care of the cribbing rots. 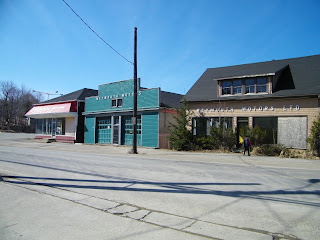 Downtown Weymouth. Not very big.
They're planning on building an industrial building there. I had to give them ideas of colour schemes. I think they liked a few of them. 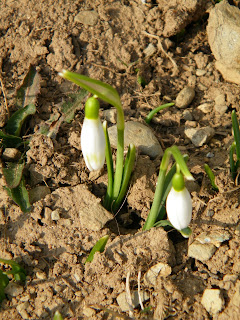 Snowdrops.
I was so excited yesterday. I have flowers coming up!!My garlic is also starting. I was worried about the garlic, since I had planted it so late in the season. We actually had a snow storm the day after.
Well I think that's all I've got for this week. I know I'm probably forgetting something, but...oh well.
Have a Blessed Day!
Lisa
Posted by Lisa at 10:09 PM 3 comments: 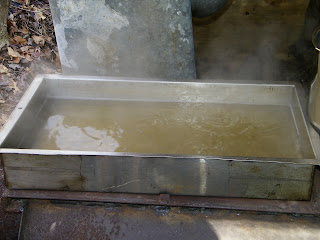 Liquid Gold!
If there is one thing I would love to do but I can't, is maple syrup. We have no maple trees on our property, so it's kinda hard to tap poplar trees. I don't think it would have the same effect.
So since I love syrup season, whenever I find out someone that does do it, I try and weasle an invitation out of them. It's not hard to get an invite around here. People are more than happy to give you a tour of their sugar shack. 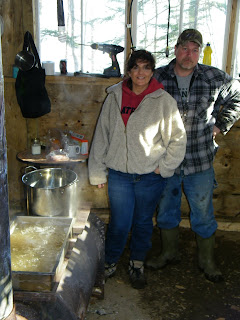 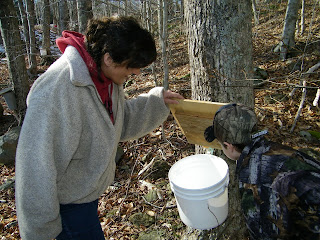 Josette and J. checking the buckets.
Sunday morning I figured she was going to call me to tell me that the sap was running. It had been cold overnight and Sunday was a nice, warm beautiful day. So Sunday we played hooky from church. We just had too much work to do. I know, I know we're Christians we shouldn't be working on a Sunday, but when you've worked all week including Saturday, you've got to do the house chores at one point. 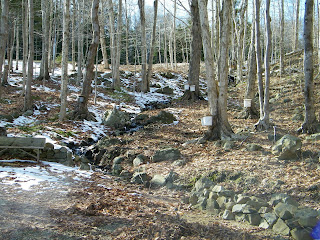 Maple trees and Buckets by the water fall.
Josette called early in the morning, but we only got there late afternoon. "Red Green" a.k.a Dave had lots of work that NEEDED to be done before Monday morning. So we finally got there. It was so nice. They even have a camp that they rent out to people there. They call it a camp, I call it a house. It's really nice. I never took pictures. I should have. 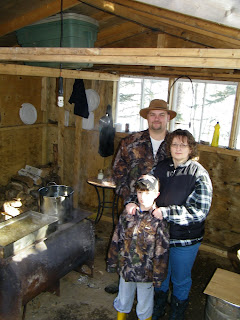 In the sugar shack.
They just have a small operation. They tap 40 trees, but it's still nice. Josette even gave me a jar of syrup to take home. You get there and it smells like the cotton candy and candy apple vendors at the fairs. Ahhhh heaven.... We stayed there for about an hour and then we had to leave to go to my parent's house for supper. She was making glazed ham with blueberry pie and cottage pudding for dessert. Yum! We couldn't miss that.
I've started my tomato seeds. Last year I had excellent luck with them, so I'm trying it again this year. 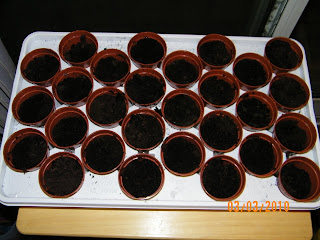 We are awaiting the arrival of our newest addition to the farm. There's a big dairy farm about 45 minutes away, so needless to say they have alot of boy calfs (or is it calves) they don't want. So they sell them cheap. They had 4 or 5 cows ready to deliver this weekend, so we had first pick the minute a boy was born. Guess what....It was all heifers!!! That's our luck. Dave had been busy Sunday morning building a stall for him. I don't know how I'm going to be able to handle this one. I have a hard time eating Gus and we only had him a few months. This one we will be bottle feeding! It's only going to be 3 days old. I even have a name for him already. Otis. This is not starting very well. I know...never name the animals that you're going to eat. But geez it's hard. 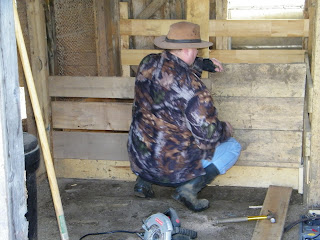 Red Green at work.
We slaughtered the 2 pigs from Charlotte's first batch of piglets. They were called Caramel and Snickers. The three before that had better names... Bar, Bee and Que.
Mud, mud, mud and more mud. Dave borrowed his dad's truck and went to the valley for feed. He backed up to the barn and kinda got stuck. 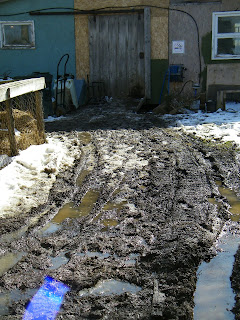 MUD!
We got the answer from the insurance company and we are not happy campers. They're writing off the car. And they are giving us about half of what the car is worth. Not good. We paid almost $8000 for this car 2 years ago. They say that there's $3500 damage to the car and the car is only worth $3300!!! Not happy at all. We counter offered, so now we are waiting their answer. 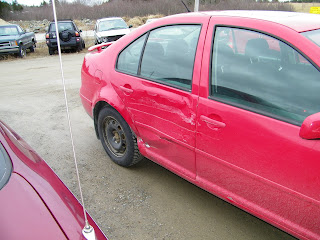 This is the damage. It is worse than the picture depicts.
Well that's been my week so far.
Have a Blessed Day
Lisa
Posted by Lisa at 8:39 PM 4 comments: