I have been trying to get at this computer now since last Monday! It's been a crazy week. This is actually the first time I get to sit and write something longer than changing my status on Facebook.
Monday night was drum lessons, Tuesday night - Bible Study, Wednesday night they had a movie night at the school, Thursday night was Awana, Friday night friends came over, Saturday I worked and the laundry was piled so high I needed a helicopter to get to the top!
Well, let me get to the main subject of today's blog. Esme.
If someone would have told me 3 years ago that I would drive 2.5 hours, ONE WAY, on a cold, freezing, windy, snowy Sunday...I would have told them they were nuts. Wrong gal!
If someone would have told me 6 months ago, that I would be bringing said goat in the backseat of my car! I would have promptly corrected them and said "No farm animals in my Jetta!"
Well, how we all change. I am the perfect example of that old saying "Never say never."
We have been on the hunt for another Alpine. My goal is to have 2 milking Alpines. I was just going to save one of Febe's doelings this spring for myself. Then Dave, in all his worldly wisedom said to me, "Where are you going to get the doeling bred? You can't bring it to Kenny's buck to be bred since that's her dad. Other than that, the closest Alpine buck is over 3 hours away!"
Oh sugar boogers! 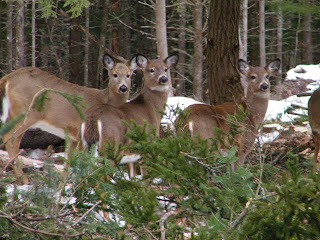 So that's why we are on the hunt for an Alpine doeling. Well we found one! She's the sweetest thing. 9 months old and all black with a few white spots on her head. BUT...she was also 2.5 hours away! So off we went towards New Germany to pick up Esme. It was actually a very nice trip other than the weather. I do beleive that the area is deer capital of Nova Scotia. I have never seen so many deer in one area. They were all so calm and majestic. It actually seemed like they wanted us to take their photos. 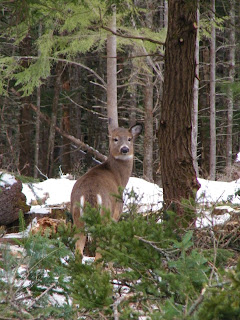 So we got to the Griffin's place in record time. I must say, that they were super nice people. We chatted a bit, but had to leave if we were ever to get home. 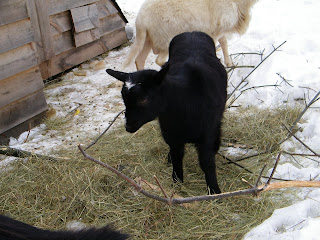 This was my first look at Esme and it was love at first sight!
We had decided ahead of time that we were not going to bring the trailer for several reasons.
-Uses double the gas
-It's huge for one little, tiny goat
-It's freezing out!!!We would have had a goat-cicle by the time we would have gotten home. 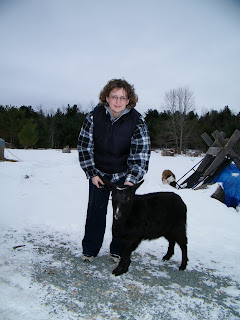 Esme and I getting ready to go in the car.
So we put the back seat down, put 3 very thick,old blankets on the seat and hoped for the best. I have read many places that a goat that is laying down will not pee or poop. Well we put that to the test. It must be true. She stayed clean and so did my car! The car was a bit smelly, but hopefully the smell will go away in a few days. 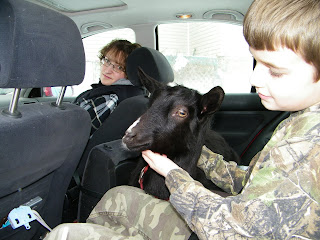 Getting home and she didn't want to come out!
Esme is a cute goat, but she's also an escape artist. We decided that we were going to isolate Febe since she is preggers and put Esme and Whisper together. They are close to the same size and age, so if they were going to duke it out at least it would be fair. We put them together, but what happened next we would never have expected it. Whisper just effortlessly hopped out of the pen into Febe's! They've never done that. I just couldn't believe my eyes. So we put her back in with Esme. Then Esme jumped out! We thought that the walls were tall enough. I guess not. So Dave had to do some quick modifying. Now it seems like they're living in a prison cell. Hopefully when they go outside and blow off some steam we'll be able to take down the bars in the cell. 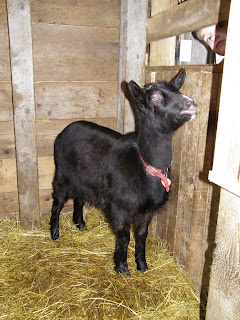 Kind of panicking in her new home.
Whisper decided that she was going to be the "big" girl. She pulled back those airplane ears of her's and just went after Esme. Then Esme started to literally run up the walls. After a little while everyone calmed down and tonight when I gave them their supper they seemed alot calmer and nicer to each other. 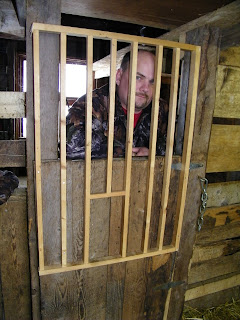 The new jail.
Hopefully things will calm down in a few days.
Have a Blessed Evening
Lisa
Posted by Lisa at 8:29 PM