Wife of the year award

Well I think I should win the wife of the year award
for this one. 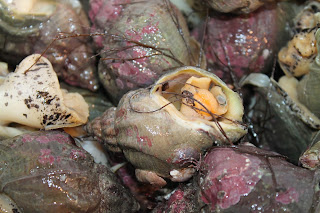 Yup, you read that right.
Not those tiny little periwinkles you see on the beach.
But these nasty, honkin' big things.
They get caught in the lobster fisherman's traps so they sell them
to people who like to nosh on them, like my husband. 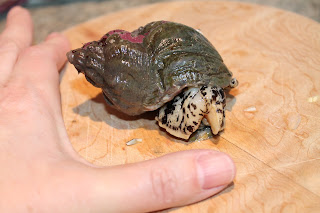 The problem with pickling these suckers is that they are full of slime....
Yup, you read that right also...slime

First of all you have to cook them in a large pot.
Take them one by one and make sure the foot is facing down.
So as they cook they can de-slime themselves.

I must have you just drooling with anticipation by now..
right?
Well wait, I'm not done.

It takes a while to take them one by one to position them correctly.
But after it's done you add a little bit of water and steam them for 20 minutes.
Like you would a lobster. (I'd rather have the lobster)

While they're enjoying their steam bath
you have to make a brine or brew or whatever you want to call it.
Everyone has their own concoction.
We borrowed ours from my mom's neighbour.
It's really just apple cider vinegar, brown sugar,onions, water and pickling spices.
Cook that for a while. 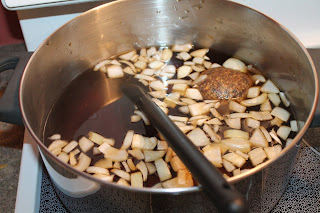 Next you have to find a long pointy stick (we used lobster picks)
To dig them out of their little houses.
And yes, they look like Shrek's boogers.
I'd better stop, I can just imagine my description is wanting to make you run
to my house and break down the door. 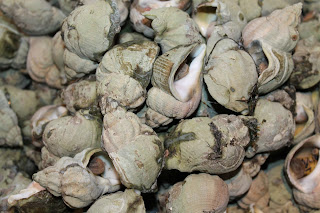 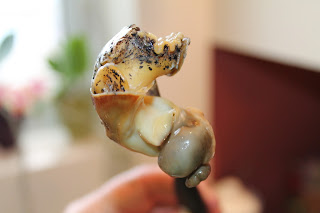 Note the picture above. Looks like a nasty booger doesn't it?
Well you can't eat the entire thing. Nooooooo...
That would be too easy.
Remember, these things, even though they've de-slimed themselves as
they were cooking, are still very slippery and slimy.
So you have to take a very sharp knife and cut about a third down.
You don't eat the grey bottom part or even that white middle part.
Just the part that looks like a snail's foot.
Then you have to squeeze it and take the gunk out and rip,
what I would call a fingernail, off!
To me it was all gunk, so it was hard to decipher what was edible and what wasn't.
This is the part of the process that takes the longest. 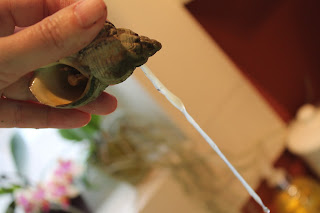 Take a gander at this beaut! Look at the lovely slime coming out of it.
Just beautiful.

Then after you're all done.
Just put in hot jars with the brew, seal and hope to hear the ping and pop
of the seals. 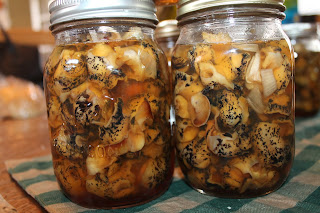 If you would like to try some of these mouthwatering
delicacies, come and visit me.
There might be some left by next week.
If hubby hasn't eaten them all.
Wait, don't bother...
he said he won't share.

Have a Blessed Evening!
Happy New Year and a Belated Merry Christmas
Lisa