I didn't know if I should post this recipe or not.
I've had a love/ hate relationship with it.
The first batch I had to redo and it worked.
Thinking that I needed two pouches of pectin.

So I followed the directions again diligently but added two pouches of pectin.
All I got was syrup.

By the time I had a chance to make it again,
the dandelions were all gone.

I'm going to give you the recipe I found on the internet and you can be the judge.
I tried contacting the original blog that I got the recipe from a few weeks ago, but they haven't answered my questions.

So here goes.
I'll give you the recipe like the blog says and hopefully you'll have more luck than I did.

You'll need dandelion tea and here's how to make it.
4-5 cups of dandelion pedals.
Try not to put the green part. It's hard. As you can see with mine, I didn't do a very good job.
But it's pretty. 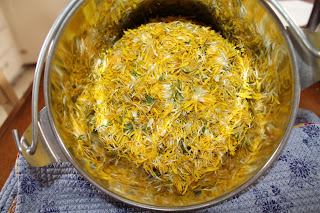 Cover the petals with boiling water. Put a teatowel or something on it to keep the petals submerged for several hours. Preferable overnight.
Separate the petals from the liquids the next day.
I used a fine cheesecloth. One you would use actually for cheese.
It didn't say how much liquid to put, so I added about 4 cups or till the petals were covered. 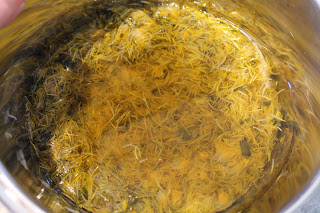 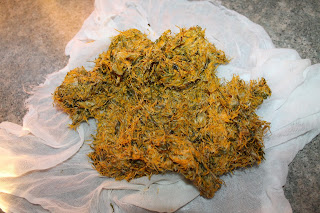 Now you have dandelion tea. 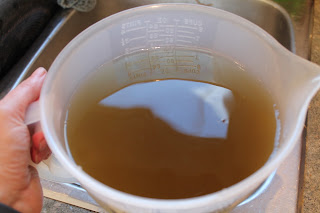 Don't panic if it looks murky. It won't stay that way.
Honestly, I thought it looked like dirty water.
Ick. 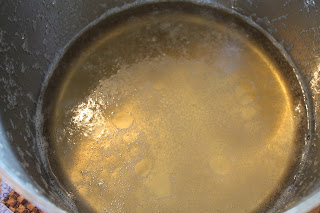 Bring to a boil,
the tea, pectin and lemon juice.
Add sugar and return to a hard boil for 2 minutes, stirring often.
Remove from heat and skim the foam from the liquid.
Fill jars leaving 1/4" head space
put lids on, fingertip tight and can for 10 minutes in hot water bath canner.

I think the problem lies with when the pectin is added.
I was always told to add the pectin at the end.
But I use liquid pectin. So I'm not sure if that makes a difference.
But all instructions in the Certo box say to add at the end.
Since this is a US site I got it from, I'm not sure if it's a different company with different instructions.
Also, it only says one box. Does that mean a box with two pouches or a box with one pouch?

So I'll see if anyone tries this recipe and has better luck.

When I try it again next year and add the pectin at the end,
I'll let ya'll know how it turns out. 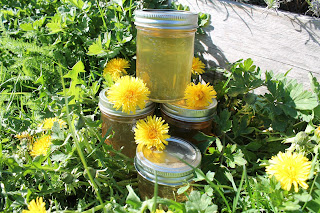 But one good thing about it, is that it's really good.
Tastes like honey. So I say it's totally worth the work.
I'll just use the syrup on ice cream...
I mean how bad can it be?