Don't say it too loud but the last few months things have been going awesome.

The job is great, things are great at home, people seem happy
Jamie is settled in his new job with Air Canada Rouge and loves it.
He calls often to say hello and how things are going...and not usually to
ask for money (like most parents say their kids do). He has not forgotten us in his jet setting
lifestyle. He remembers his old folks.
Once again we are super proud of him!
He called tonight when he got home from Miami. He was tired. It was overnight and like
he said if you don't love the lifestyle you won't stay long.
He said he loves the lifestyle and he's happy. That's all we can ask for!

Even though things are going tickety boo I've had a few set backs the last few days.
But it will pass...I know it will.

I was finally on a waiting list for my heel surgery for November 13 or 14.
The secretary called and said the doctor had extra O.R. time and wanted to know if I
wanted the surgery on a definitive date (not just a maybe). Well of
course I said yes! She called last week and the date was November 1st!!
Ack didn't give a lot of time to get things ready. Oh well I was going!!!

October 31st I was getting ready for our radio station's Trunk or Treat event for the kids.
On the way out of the house carrying the treats I fell down the stairs!! Candy flew everywhere. But we saved it even though it was raining.
I on the other hand did not fare as well at the candy.
After a certain age, one does not bounce as well as one once did!
Well I have reached that certain age.
My left elbow is tender, my back was slightly bruised but...
my tailbone did not fare that well.
The doctor says it's just bruised but it's going to take a very long time
to heal. Mylanta it hurts like the dickens everytime I cough, breath, move,
have to go to the bathroom etc...

But the next day I went for my surgery. I'll know more in two weeks on how that went
but for now I'm chair-ridden. I have crutches which I hate.
I should have gone to the gym for upper body strength. I'm so grateful that we kept
Dave's dad's wheelchair. It's been a Godsend or I would
be stuck in the house. I'm a clutz to start off with (Really!?!?) and those crutches are evil!!!

Then Sunday while eating breakfast I'm not sure what happened, but the only
thing the paramedics can figure out is that I made a reaction to the
painkillers combined with the coffee. Weird...
I know...but I thought I was dying and that's why
I got Dave to call the ambulance.
But it looks like things have settled and I can sit back (ok not too back with a painful tailbone)
and maybe heal a bit.
I sit in my chair and the nursemaids keep me warm (the weiners) and Dave is my chauffeur,
cook and cleaner.


I have learned one thing in the last few days though...

Even when a place says that they are wheelchair accessible...
they're not! If I was alone with my wheelchair I would not
be able to get into 80% of the places that are supposedly accessible.
People appreciate your legs...even if they're too fat, too skinny, have varicose
veins, too short, achy, sore, tired etc... at least you can use them!
When you can't use them (even if it's for just a few weeks) you realize what a
gift from God they are!! 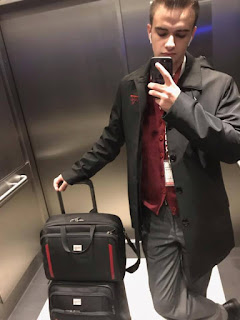 And on a last note...Jamie going to his first flight! He's so snazzy!

Have a Blessed evening!
Lisa

p.s. We got more than that small jar of honey. When Dave checked the hive for the winter our honey super (which is where we would get our honey) had 10 pounds!!! Woohoo!!!
thank you little bees! Don't worry, the bees have more than enough for
themselves to last the winter.