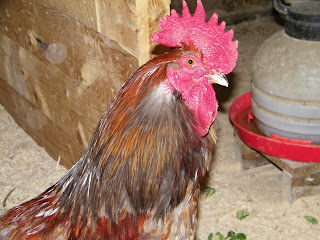 Well, where to start. 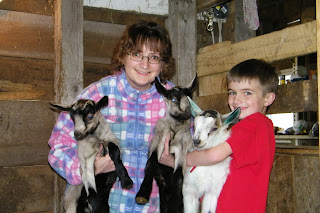 Me and the kids. All four of them!
All is well. Febe kidded last Thursday. She gave birth to identical twin boys!! Not so happy. But the Lord gives us, what the Lord gives us. We've decided that we are going to keep one and breed it to Cindi Lou Who and Esme. Maybe even Whisper.
We had the problem of trying to name the bucklings. Dave wanted to name them "This One" and "That One". I found it cute but I really didn't want to name them that. At work we have two older guys working with us. They are always pulling pranks and acting foolish. Sooooooo..... I want you to meet.. "This one Arthur" and "That one Mike". Their official names will have Spring Peeper in front of their names. 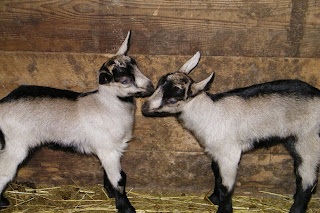 This One Arthur and That One Mike
I'm kinda worried for them. I don't find that they are eating much. But they are looking healthy. They are getting bigger and playing and frolicking. It's just that Febe's udder is humunga bunga!! I had to milk her yesterday and I milked over 2 litres!!! and I wasn't even done. But they must be finding milk somewhere's.
I got home from an Epicure party a few hours ago and I noticed that the neighbour had a chimney fire going. The fire dept is still there. The strange thing was that she had no fire in the furnace. She just had the oil furnace going. Not good. I'll have to ask Dave what went on. He's in the fire dept.
April 14
Well I had to milk Febe again tonight. They are favouring one side. I got 2 litres on just one side. The poor girl was in misery. I called my goat lady and she said that I should milk her morning and night to keep her even and they'll have enough throughout the day and night. 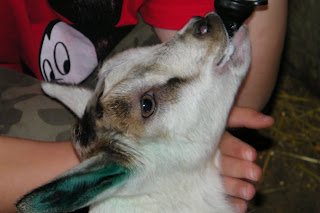 Cindi Lou Who having lunch
Cindi Lou went to school Monday. She did well and the kids loved her. They even got to feed her. She was so tired when I left that she fell asleep in my arms on the way to the car. But she's becoming a little minx. She's jumping on the milking stand now, while we aren't there, then grabbing things off the upper shelves. She is growing like a weed. She's eating some grain now, but she won't drink out of the bucket so she's still on the bottle. I had to put a bale of hay on the milking stand to stop her from jumping up.
Tonight (April 15) I milked Febe and she hardly had any on both sides, so they must be keeping her even. That's good. But she's got a sore on her head. I think she goes under the feeder to clean up after them and she rubs her head. I hope that's all it is. I'm telling ya, these goats are going to drive me to drink. And I don't drink! This morning I had so much on my mind, I got to work and I thought, "Oh Crud!! I left Febe on the milking stand!" So I call our neighbour in a panic and he went to check. No, I hadn't left her on the stand. I need to get back in the groove of things. Is there ever a groove?
Monday we treated ourselves to lobster. It was good! We had enough for 2 meals. At 4.75$ a pound, that's pretty good. It was actually cheaper than eating in a restaurant. 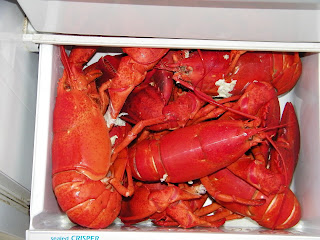 YUM!!
The chicks have been moved to a larger place. I think they doubled in size overnight. Otis is doing well. His fur stopped coming out. He's off the bottle (that sounds strange) and drinking water. Soon he'll be going to the big pasture up the road.
This coming Saturday is pig day! Everyone is coming to get their piggies. That'll be nice. We are keeping 2 for ourselves for meat this fall. 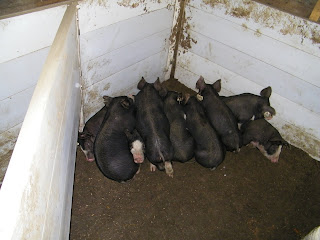 Ok, it's enough. I have to publish this post. It's been sitting around long enough.
Have a blessed day!
Lisa
Posted by Lisa at 9:39 PM