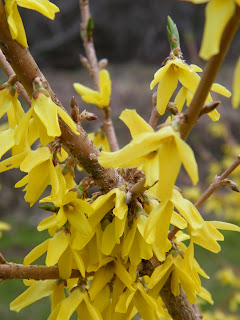 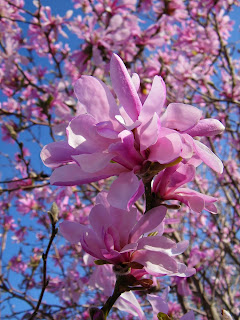 My forsythia and magnolia bushes
This blog should be entitled...The Last Two Weeks in Photos.
It started with a beautiful rainbow. Isn't this picture so inspirational with the Irving propane truck in the foreground. tee hee 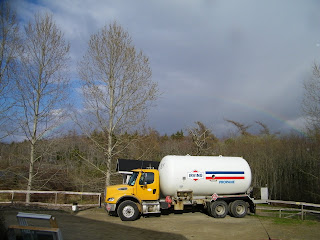 I thought the rainbow would show up better.
Well once again its the case of "never say never". Words have alot of calories. That's why I don't seem to be able to lose any weight. I keep eating my words. Sigh....
I always said that we would never, ever get a trampoline for J. Well, Dave found a near new trampoline in the local paper for next to nothing. Sooooo here it is. We are having a blast with it. 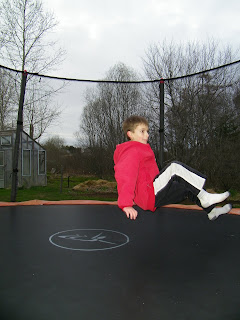 J. and the trampoline
The weather is holding out. It's been just beautiful. Some days are a bit chilly, but mostly sunny. The problem like I mentioned in my last post is that we are not getting any amounts of rain. Not good. By now my garden has a few inches of water between the rows. At the moment, it's almost dust. Not good. But my garlic is doing wonderful. 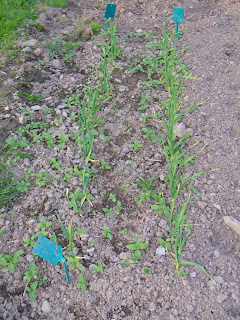 The Garlic
My rhubard almost didn't make it. Dave didn't realize it was there and tilled the garden. Uh oh! This is all I have left of it. 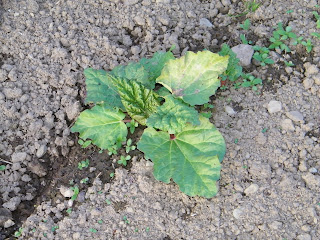 The rhubard on it's last legs 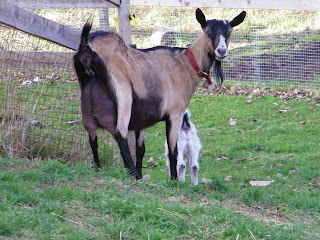 Febe and the exploding udder.
The goats are doing well. They all go outside together now. Esme is terrorizing Cindi Lou. Febe is terrorizing Esme, but most of the time protecting Cindi Lou. My dilemma now is should I get rid of Esme or Febe. I was going to get rid of Febe since she's not very nice with J. But.....she gets along with everyone except Esme. Esme on the other hand doesn't get along with Febe or Cindi Lou. Even J. would rather me get rid of Esme than Febe. His opinion is....
"Mum, Febe is a good mother and milker, you don't know what you're going to get with Esme. I like Esme, but you sometimes have to think about the big picture. I can always stay out of Febe's way. But she is getting nicer to me."
My child is wise beyond his 9 years.
We are going to band one of the boys. It's a buck year. Everyone has had bucklings. Not a good thing. It's hard to sell them. I really hate to think that they would go for meat, but..... 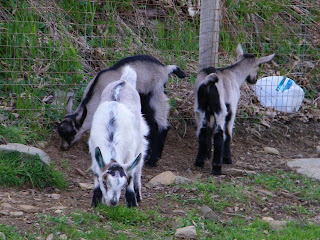 Cindi Lou, Mike and Art
Last night I seperated Mike and Arthur from their mom, so I can get some milk in the morning. It didn't go so well. There was whole lot of blatting going on. But this morning everyone seemed happy and I had 2 litres of milk! Which I am drinking now. Ahhh! It's so good.
I have been trying to take photos of the kids, but it's hard to take a nice photo of flying objects! I love this photo. Look at Mike's legs. He is just flying. (ignore the junk in the background). The Wild goat rodeo
Cindi Lou had little scabs all over her body. We have no clue why. I even called the vet and they have no clue why. So I've treated her with Cy-Lence and everyone else for that matter in case it's a case of lice or mites. It seems like it's doing better. It's against my religion to drink, but these goats are working hard to drive me to it! 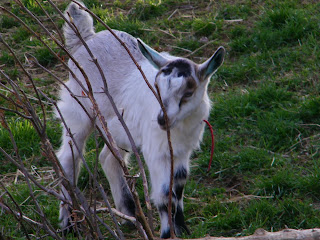 Cindi Lou Who
Otis is doing well. He likes to stick his tongue out at us. He's going to the big pasture up the road in a few weeks. His hair loss is doing better. We treated him with Cy-Lence and it seems like it did the trick. We have a different problem now. Dave got the farmer up the road to come and castrate him because we were told that he hadn't been pinched where we got him. So Herbie, the farmer came to do it (and he's done it many, many times.) He can't find "them" to pinch "them". Hmmm....strange. 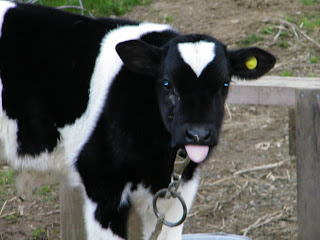 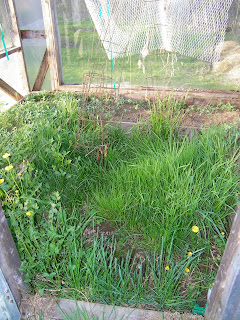 My Evil Greenhouse!
This is called doing your work twice!!! I swear.. I'll never learn. I thought I was getting a jump on the year. I guess not!
Most of the pigs are gone. Only one left. He was supposed to leave at the same time as the others, but the guy's car broke down on the way, so he's coming Tuesday. If he stays here any longer Dave is charging him boarding fees which is normal. 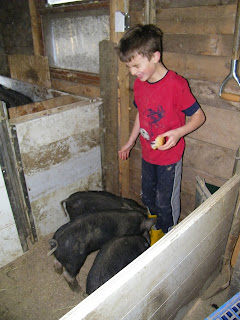 J. feeding the piglets
Two of our young chickens have died yesterday and today. One from being picked to death and the other, we aren't sure why. Chickens are evil things. I hope we don't lose anymore. The two we did lose were pullets. Crud.
Last week was Stampede Day at our place. Who needs the Calgary Stampede when you have goats!
I needed to get Cindi Lou out of the pasture to feed her. So I just opened the gate a bit and Febe stuck her nose through. I grabbed her collar, but at the same time Esme tried to sneak out also. So I grabbed her collar too. (do you see where this is going?) For a split second I had control of the situation. Then my foot got caught in a tree root. There I go being dragged around for a few seconds (felt like minutes) on the ground by two goats before I realize...."Let go, stupid dummy!" All this time, Dave and a visitor are watching me thinking..."What is she doing?"
Never a dull moment.
Yesterday J. and I painted the barn, well one side of it. Then we ran out of paint. Then he painted his tree fort.
Tomorrow I have the entire day planned..
-get chicken feed
-do banking
-clean sheet day
-clean (and I mean scrub on my knees kinda clean) the kitchen floor
-paint the french door in the kitchen
-clean the goat pen
-make supper so we can eat for 4:30 so we can go to drum lessons
-go fishing with J. after school.
Phew... I think that's it! Dave asked what I was going to do in the afternoon after I've done this list.
Today was a good sermon at church. We had Calvin Smith from CMI come and explain creationism and how is pertains to regular everyday life instead of evolution, which we don't beleive in. www.creation.com 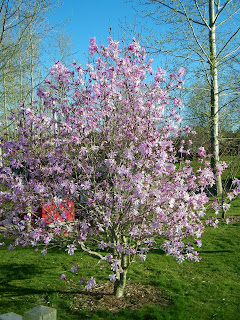 My Magnolia Tree
Well I think that's it for this post. Have a blessed day!
Lisa
Posted by Lisa at 7:35 PM