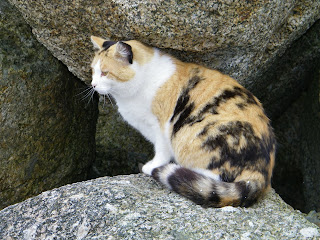 One of the Mamas
I thought that I'd blog about something that is close to my heart.
Living in Nova Scotia, close to the ocean is just wonderful. I tried living away from the ocean a long time ago, but I missed it so much I moved back. I do live inland, but it takes a total of a 3 minute drive and I'm on the beach.
That said, there are bad things here also. Wharf cats. There are hundreds of wharves in the area and some people think that it's just fine to dump unwanted cats and kittens on the wharf. They think that they'll have all sorts of food to eat. Rats, mice, fish etc.... This is just a cruel practice. People are getting more responsible for their pets, but some people are still down right mean.
Some people say, "If you want to get rid of them, just poison them or shoot them." I don't think so. That's just nasty and they populate so fast that when one dies, there's another five to take that ones place. Plus if the male cats are gone and can't defend their territory, other males will come and take over. The cycle starts all over again.
Several years ago my uncle retired from his job. He noticed all these feral cats on the wharf. These poor things were starving, stunted and inbred. Some were fullgrown, but looked like kittens, with short legs. He began feeding them and building little houses for them. He told my mother, who in turn started telling other people. Then it just snowballed from there. There is now a Clare Feral Cat society.
www.petfinder.com/shelters/ns42.html 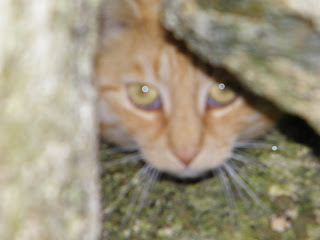 A very scared cat
They raise funds to buy food for the cats, build more shelters, buy live traps, get the females spayed etc... They need the live traps to catch the females to bring them to the vet. 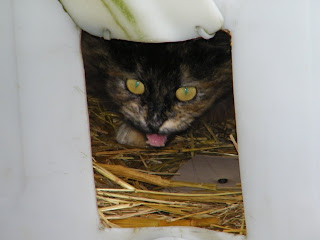 Another Mama protecting her brood.
When they find kittens that are weaned, they take them away and get them adopted out. Most of these cats are now actually semi-tame. You can't pick them up, but they will let you pet them. Some are still extremely wild. 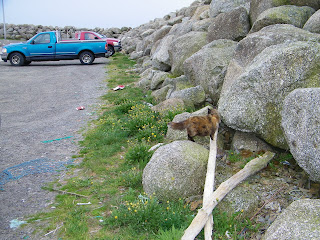 Mama going for food.
J. and I went to visit the cats. We checked the houses and we found 2 litters of kittens. They were just a few days old and extremely cute. I took a few photos, but we didn't stay long because it was freezing out and starting to rain. We'll go check on them again next week. 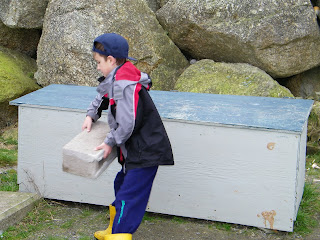 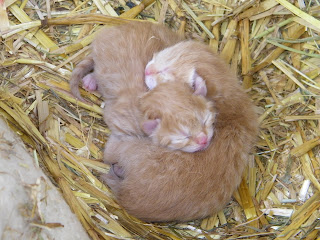 Cuties!!
Well I have to go. It's been a long day at work and I have goats calling my name for feed.
Have a Blessed Day.
Lisa
Posted by Lisa at 8:53 PM