We had a sick goat on our hands this week. I mean really sick, like -have-to-call-the-vet-but-don't-really-want-to-because-it's-going-cost-a-fortune-sick!
It all started Saturday morning when I checked on the little darlings. I noticed that Esme's hind legs and tail were soaked. I looked around and noticed a large wet spot on the floor, it didn't look like diarrhea but you never know with goats.. I figured she just ate too much grass and had diarrhea. I left her in the barn for the day and didn't think much more about it.
Sunday morning when I checked on the critters I noticed spots of blood on the floor. I looked at her bum and noticed blood coming out of her vagina. Now was the time to panic! But she was acting normal, eating normal and I checked her temp and that was normal. I was completely confused. So Dave and I gave her a shot of Pen-G (penicillin) as a precaution. Needless to say, she was not amused to have a needle in the back of her leg. I still kept her in for the day and kept a close eye on her. What I was afraid of also, "was it contagious?"
Monday I called the vet in Middleton, since they specialize in goats. They were baffled. We talked for awhile trying to figure out what was the problem, but to no avail. The only thing they could figure out was maybe she had a varicose vein in her vaginal wall that had busted and it was bleeding. It would rectify itself. They had never seen it in goats, only in horses, but anything is possible. So she told me to deworm her and give her the Pen-G for a few more days and keep a close eye on her. Then 5 minutes later the vet called me back and said, "I was thinking more about this and even though this usually just happens in Oct or Nov, Esme might be having a pseudo-pregnancy. She's young and confused so she might have thought that she was pregnant. They usually have alot of mucous that discharges when they think they should give birth then have bleeding for a few days."
So my goat thinks she was preggers! What next. I checked her tonight and no blood. Completely clean. Hopefully it stays that way. 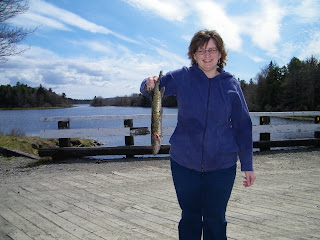 My first catch of the season!
So the rest of the week involved fishing for the first time this season. We all went to a river not far from our house. We each caught a pickeral. We are a catch and release kinda family, so off they went back into the river. 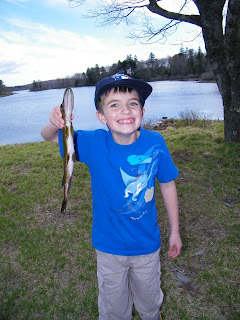 J. very excited!
Monday afternoon I cleaned out the greenhouse again and planted my tomatoes. I'm hoping it won't get too cold at night. It's been pretty hot the last few weeks. 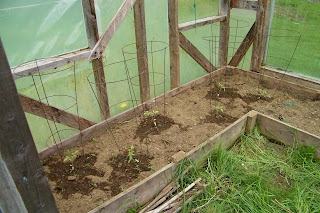 My clean greenhouse. I gave up on the middle part.
The blackflies are out with a vengeance. They are hungry and plentiful. The mosquitoes shouldn't be too far off. Shudder... 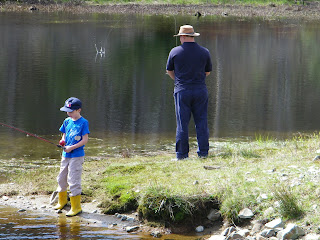 Father and son
Sunday I actually had a few minutes (very few) to sit in my favourite spot. 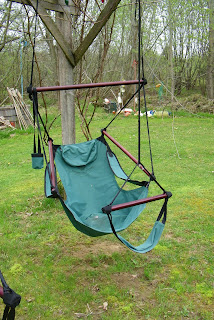 My favourite chair. It might look strange but it's ohhh so comfortable.
It's been so dry that our little pond is going dry and my poor little tadpoles are getting a smaller, very smaller little pool. 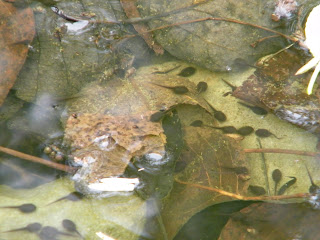 Tadpoles. Little fish in a very little pond and getting smaller by the minute.
Since it's spring our very plentiful poplar trees are leaving little cling-ons everywhere. You can't get rid of the darn things! And they stain the clothes also. The cats are not happy with them either. Febe has some all over her beard and Shadow has some all over his butt. The photo doesn't do Shadow's cling-ons justice. 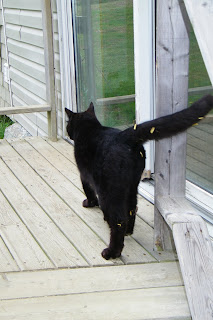 Shadow and the clingons!
This ugly part of the old barn used to be the pig pen. Needless to say it is full of nice composted pig poop! Lots of it. So we (Dave) are going to clean it up and it's going to become my pumpkin patch for my giant pumpkins!! Imagine the big pumpkins that will evolve from that poop! Ohhhhh yeaaaah. 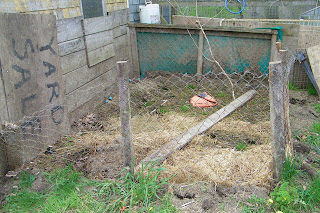 The pumpkin patch in the making.
When you think you've seen everything on a farm, you see something else that makes you go "hmmmmm". A few days ago I went into the chicken coop to gather the eggs. The two roosters had kicked out the hens and were sleeping together in the nest. No, no don't even go there.
Well have a blessed day!
Lisa
Posted by Lisa at 9:37 PM