He is no longer under house arrest! Pico has been a very bad kitty.
He wanted to go outside...so his wish has been granted.
I do worry about him getting run over, but I also worry about keeping my house standing and not having to call the insurance company for weird claims like...

My cat flooded the house because he opened the kitchen faucet. 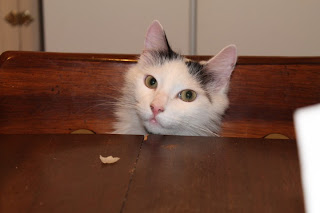 Yes he has a sweet face and an even sweeter disposition but behind that soft fur lies the brain of a scheming, conniving kitty!

Let me back up a bit.

A few weeks ago we went to Halifax for Dave's check up with his surgeon.

We got home around 7ish.

As we all climbed out of the car I could hear water running.

I opened the outside basement door. There was about an inch of water on the floor! And the pump was running non stop. But we couldn't see where the water was coming from.

I ran and unlocked the door.

There was the faucet (it's a single lever) running full tilt and hitting the milk bucket I had left in the sink upside down that morning. It was hitting the bottom of the bucket and flying onto the backsplash. Then it was running all over the counter and going under the sink soaking the floor and running into the basement!!!!!

See , Pico likes to jump in the window above the sink and sleep on the counter also (something that drives me nuts!!and grosses me out! Think...paws that also go into the litter box)

So he had opened the faucet and succeeded into almost burning the pump and draining the well, not to mention water damage.

But I love Pico, so I gave him another chance. So I dried under the sink. (It took a week) and told him not to jump on the window sill again.

That morning I woke up to go to work and I heard the faucet running.

(insert bad words here, even though I am a Christian)

I ran to the kitchen to find that Pico had jumped in the window, knocked down the plant that was on the window sill and turned the faucet on hot!

I'm not sure how long it had been running, but the plant had fallen in the drain and plugged it! So the sink was overflowing and the water was falling under the sink again, soaking the floor AND the rags!
This time I put the dehumidifier under the sink and it still took 4 days to dry!

So this time not only did the pump run and run and run but the hot water heater ran all that time also!

I went to work and Dave called me to tell me that not even 10 minutes after I left, Pico was back in the window.

I worry he might meet the same faith as his brother, but he's slowly destroying the house.

I think I might bring him in the house every once in a while. Being outside might tire him out.

I've been watching him and he does love it outside.