We the last couple of days we have been hit with a wicked snow storm. It started New Years Day in the evening and ended Jan 2. But man in that day and a half we had snow! It was nice. They say we had 30cm, but here we had way more than that. It's also nice snowman snow. Which is good if you want to build a snowman or a fort, but.... if you want to get rid of the snow in your very long driveway it can be a pain. This was what our friend Chris calls, heart attack snow! 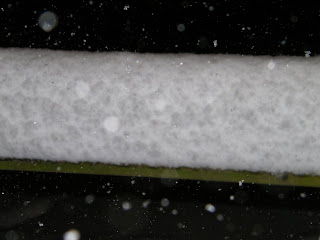 Our patio railing. We had cleaned it off twice that day! Notice the size of the wood. That's a 2x4 . 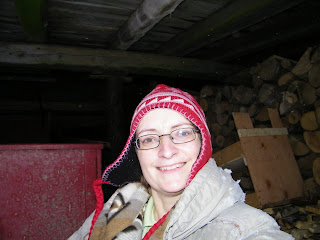 This is a self portrait of me, while J. was sledding in a blizzard. I was hidden under the neighbour's barn. 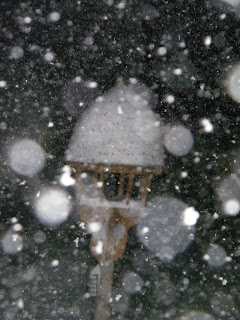 This is supposed to be my bird feeder. Think there was a bit of snow?
During the school break, our church rented the skating rink and we all went skating and then had hot chocolate and cookies. That was fun. 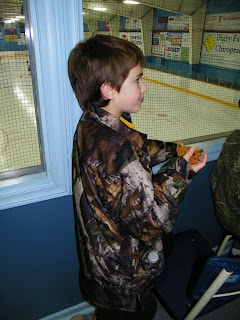 Here, J. is enjoying a cookie after a hard evening of skating and playing hockey.
We have had a small set back. Dave has broken a bone in his wrist. Not good. He did this at the beginning of December, but the doctor said it was just a sprain. So last week after much more pain, he went to see the doctor on call and she said it was broken. So off to Xray he went and, yes, it was broken. So he's off work for a while.
Since spring is just around the corner, (yes, I'm the eternal optimist) I'm thinking of incubating some eggs in the incubator. The rooster is really making his rounds, so I'm wondering if I shouldn't start the incubator a bit early this year. The only thing is that I'd have chicks in the basement for a few months. Let me give ya'll a word of advice....chicks and cats don't mix.
So maybe I should wait another month.
It's so nice out today. I've dug a path to the goat pasture and put them out. They need the exercise. Febe has it a bit easier than Whisper since she's taller. The snow is actually up to her belly. But it's so warm out today and the sun is shining so, the snow should go quick.
p.s. I guess we had more than 30cm of snow. We had 65 cm!!!
Have a Blessed Day.
Lisa
Posted by Lisa at 10:23 AM