Remember when I told you guys about Lacey and Miss Munch?  Well it didn't have a happy ending.  We still have Lacey (which we renamed Poutine) but we had to put Miss Munch down.  It was a very hard decision but she ended up with a chronic lung disease that wouldn't get better.  We were constantly giving her meds and even her eyes would get filled with pus and stay shut.  I was always washing her eyes, giving her drops and medication. After several weeks of it getting better, then worse, then better then worse again and one of our vets said that it was not going to get better and was also contagious to other cats, we decided it was best to send her to kitty heaven.  We were playing a game of Russian roulette waiting any longer. I didn't want Poutine and Binoo to get it.

So fast forward a few weeks and Dave starts the hunt for a barn cat. A friend for Antonio and the others. He found two in Yarmouth. They were a bit older, more like teens.

They were destined to be our barn cats....well that's what they started out as.  Then the lady that gave them to us told us....

The Tale of Two Kitties

This lady's husband worked for a furniture rental store.
One day he went to get some furniture that the people weren't paying and discovered that they had abandoned the house. He found these two kittens abandoned, almost dead!! He brought them home and his wife nursed them back to health, but they already had 4 cats in the house and couldn't keep these two. So she was giving them away.

We were lucky enough to get them. We are not doing them a favour by adopting them, the kittens are doing us a favour by loving us.

Dave brought them home fully intending to put them in the barn...and we did.  But they ran across the road to help our neighbour decorate for Halloween.  Without her knowing she locked them in her barn.  We looked and looked for them and couldn't find them. Later on the next day she calls and tells us she's got two cats in the house with her huge dogs!  She figured they were ours and told us to come get them whenever we were ready, but at the moment they were playing with the dogs!

So the next week we brought them to the vet to get them fixed and discovered they were 5 1/2 months old.

We named the black and white one Pico.  It's French for dot.  He's got dots all over him.

The grey striped one we called Slate. 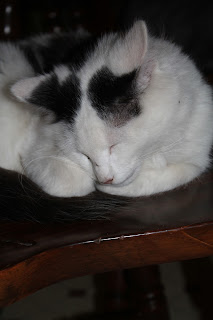 So please welcome our new additions Pico and Mr. Slate. 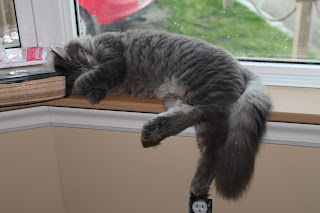 Oh and Slate loves to massage people's heads and necks.