Wow! That was one heck of a flu. But I'm back! I only have a cough left that I was told will last for a month or so. Even though I'm no longer contagious people look at you in a weird way when it sounds like your coughing up a lung.
So many things have been happening but at the same time it's almost not worth writing about.
The weather here is beautiful. It's nice and warm and sunny. Though we are also having our share of rain. On a few days it rained and rained and rained. Friday it was a complete downpour. The day started nice and sunny. The weather man did say it would rain, but there was not a cloud in the sky, I thought," You wing nut! It's not going to rain." WELL! Rain it did. At noon it clouded over and put Noah's flood to shame. I ran to my car and it's only a few dozen feet. I was soaked to the bone. Yuck! Cold rain. I put my bun warmer on high in the car. It felt good. ahhhhh.....
We got the last 4 meat kings done on Friday also. We had 7 left, but I think they died of heart attacks or something. But the time Friday showed up there were only 4 left. But they are big. Well for our family of 3, 6 lbs is big. We'll use those as turkeys. Like I've said before it was a hard year for meat birds. It's so discouraging.
Tomorrow I have to clean out the meat bird pen, the laying bird pen and the goats. It's going to be a long day! 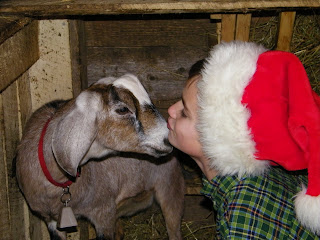 I decided that I'm going to make my own Christmas cards this year. But I needed a photo of a goat with a Santa hat. Easier said than done. Whisper was petrified of the hat. So plan B....J. is going to wear the hat while he holds Whisper. Again easier said than done. It took 30+ photos to get one kinda good one. Thank goodness for digital cameras. The one I'm posting is not the one I'm going to use. 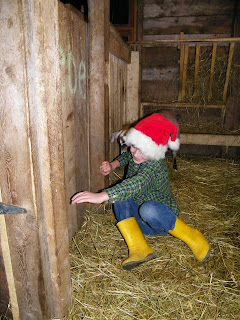 Tootsie came home yesterday full of fleas and hard grease. The vet was closed so I gave him a flea bath till tomorrow. It's going be cost a small fortune to deflea and deworm 4 cats. Ugh. 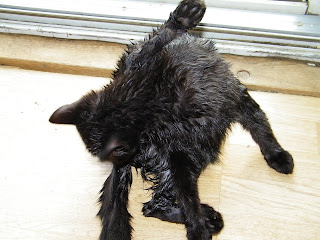 J. and I went to a Christmas tea today with my mom and aunt. It was nice. I like those kind of things. 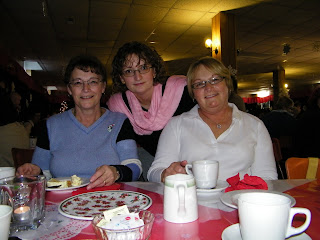 My mom is on the left and my aunt Elizabeth is on the right. J. took the photo. He did a pretty good job.
Well I guess that's enough for today.
Have a blessed evening
Lisa
Posted by Lisa at 6:47 PM