Well, well, well...ole man winter is finally here. Except for today it has been a very cold week. Everything is frozen solid. So this means that we now have to carry the water to the animals. Bummer. That's not fun. It takes extra time in the mornings also.
Well last week was a very nice snowfall. I love snow. I know most people think I'm nuts, but it's so calming to watch it come down, except when you're watching it come down on your windshield on your way to work. Then it's not so relaxing. 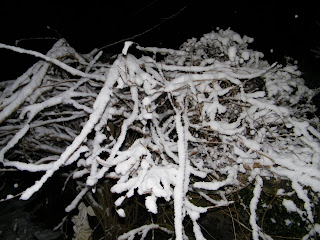 My wisteria tree at 6a.m. It looks like a spider. 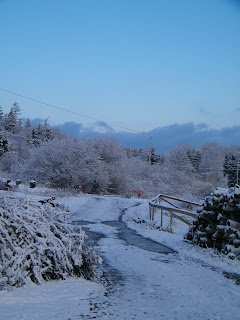 Looking towards the road at 7 am.
We also put the tree up last week. We had the original pre lit tree. Before they came out on the market. Our tree has its branches on hinges and we also have a walk in attic. So many years ago we put all the lights on the tree and when Christmas is over we just take the ornaments off the tree and Dave ties it all up, puts an old blanket over it and off it goes in the attic for another year. Ta dah!!! Next year we don't have to put the lights on the tree. It's already done! Yay for us. I hate putting on the lights. 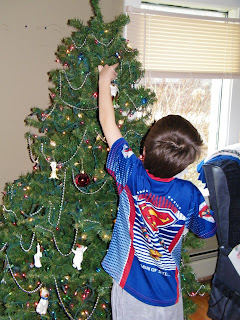 We had a turkey dinner at our church on Sunday. It was a success. It's only the second one I've done. The church ladies help alot though. We had one glitch. We ran out of veggies. The first one we made we had waaaaaayyy to many so next time hopefully we'll have just enough. 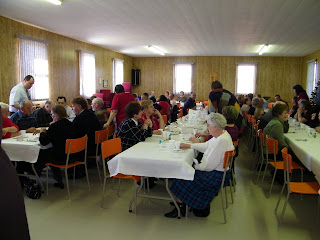 We also went on the house tours in the afternoon. We toured 5 houses. All very nice. We'd like to do it one year when the farm is all in order. We would open the barns and decorate them also. I think it would be cool. 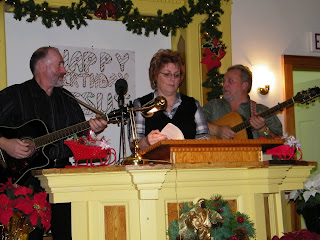 The Havelock Trio..Terry Stone, Charlene Sabean and Glen Sabean.
Then after all that we went to a small church in a place called Culloden to see our friends "The Havelock Trio" sing. They also invited us to sing a song also. We sang "Merry Christmas, Mary" by Paul Overstreet. I think it went over well. It was the first time we sang other than in our own church. That was weird and for some strange reason I wasn't a bit nervous. When I say it's a small church I mean, it's a really small church. It only has 10 pews, that only sit 4 per. But I love going there. It is so sweet and the pastor seems really to have the spirit of God about him. Not phoney. 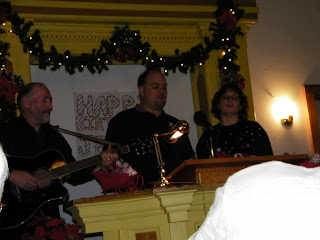 Here we are in our singing debut.
We also had our Christmas concert last Sunday. Dave and I were just in the choir this year and J. was the cutest little sheep. This is a picture of the choir, I'm right in the middle looking goofy as ever with my penguin sweater. 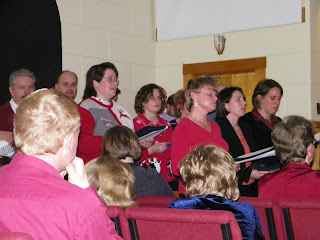 Well, now for farm news......
Febe has mange. It's not dry skin. I have no idea where she got it from, but I am not amused! Especially since everywhere I read it says it's because of unsanitary conditions. My barns are very clean. I called my vet to see if Ivomec will kill the mange and he said, he'll sell it to me, but he won't tell me anything about it because it's not proven on goats. Grrrrr... So what am I supposed to do? American websites say that it's ok to use Ivomec on goats but nothing in Canada. Are Canadian goats different? I don't think so.
So I called another vet that deals alot with goats and he said that there is no problem in using Ivomec in pregnant does. Just remember that there is a 60 day milk withdrawal (I was going to dry her out after Christmas anyway) and I guess it really stings when you inject it. That I knew because Dave uses it on the pigs and they scream something fierce when you inject them. The first time he did it, it actually brought the Charlotte to her knees. He didn't realize that it hurt them. Nobody had told him. He thought he had killed the poor thing. Now we know better.
Tomorrow a friend of ours that regularly injects his goats with Ivomec is going to come and show us how. I'm going to try not to cry.
Well I have to go to bed it's getting late and it's been a hectic weekend. Tomorrow night I'm having a few girlfriends over for Christmas movie night. I can't wait!!!
Have a Blessed evening
Lisa
Posted by Lisa at 10:20 PM