Brrr...it's been a cold, wet and rainy day. J. was still sick yesterday with a fever so Dave brought him to the doctor on call. He's got bronchitis. Maybe that's why he's so sick. He's better now. The medication worked well.
Dave finished the ramp to the barn yesterday also. So that's one less thing to do on the never ending list. 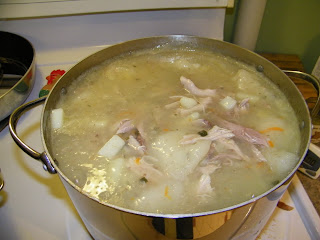 Today, since it was a crappy day I decided to make a chicken fricot. It's really just a chicken stew with dumplings made with rappie pie (that's another story on its own). It was just the day for it. Now I have a big problem, I have some till the cows come home. I can never make a small pot. 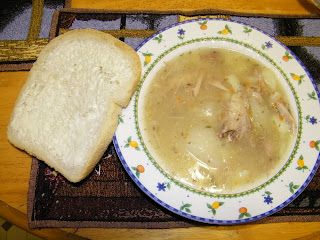 I also thought I'd make another stick to your ribs dessert. Blueberry Fungi! Or some other people they call it blueberry grunt. I think it's a Nova Scotia thing. It's really easy to make. 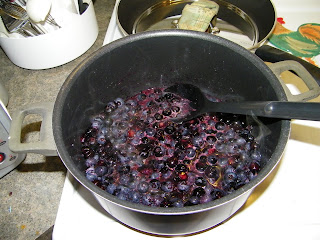 Just take a quart of blueberries, half a cup of water and sugar each. Cook till it's made lots of juice, then drop spoonfulls of dumpling mixture, not the the rappie pie one, another one into the blueberry stuff. Close the lid for 15 minutes and simmer and DON'T PEEK! Then Voila! You have blueberry fungi. 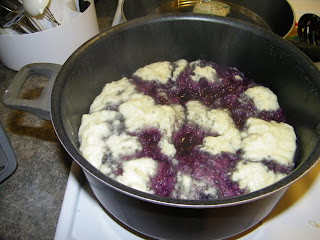 It was all good food, oh and fresh homemade bread from the local bakery. I don't make bread. It's a waste of perfectly good flour. I've tried before.
Dave told me not to post these photos. He said they wouldn't look to appetizing to someone that's not Acadian, but I'll take my chances.
Have a Blessed Evening
Lisa
Posted by Lisa at 7:12 PM