I never thought I'd see the day. I have a henpecked rooster. First we had Philias, he was a bantie ameraucana rooster. Him and Philomene were a pair. I was sure he was gay. He never crowed. He would cluck. He did do his thing though. Because we now have Bibi his daughter. Anyway, I digress. Philias had to be put down a few months ago. Something happened to his leg and it couldn't be repaired. So off I go on a tangent to find a new rooster. One that would CROW!
Well wouldn't you know it?! This guy doesn't crow either. He tries, but his "girls" peck him. So he is literally henpecked! Take a look at the back of his neck, no feathers! What next.
It's been a long week. I broke a tooth at work. No worker's compensation won't pay, I broke it on break eating a piece of popcorn. Not even on an old maid. Just a piece of popcorn. I have to wait till Thursday before I can get it fixed. At least it doesn't hurt, cause it's on a tooth that had a root canal done.
I had to work Saturday. Ugh. That just kills me. It tires me out for the week. I'm just getting old. That's all there is to it. 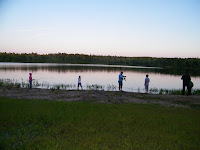 Friday night we went to my cousin's camper lot. Dave and J. fished most of the time we were there. There was a nice moonrise, I guess you could call it. 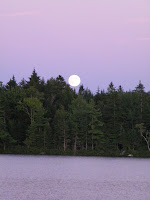 I didn't go to church today. I think there was a reason that God said we should rest on the Sabbath day. Instead of going to church , I painted the barn. It gave me a headache. I should have gone to church and been spiritually uplifted, instead I got a migraine.Nice. Dave and J. went fishing. I just had too much to do, I had to do deviled eggs, clean the house, put clothes away and paint the barn. That's one reason I don't like working on Saturdays. It puts me behind on everything at the house. We had a potluck to go to at the church tonight. Dave was making his famous BBQ chicken. That's why I made the eggs.
This was not the weekend to be in this area. It's called Wharf Rat Rally weekend in Digby. It's one of the biggest motorcycle rallies in North America. It's just a tiny town of 9000 people and about 50,000 people swarmed in!! All on Harley's. I really don't want to offend anyone, but I really don't like Harley's. I mean why pay 25,000$ for a motorcycle that's going to shake your innards? I can do it much cheaper. Oh well no accounting for other people's tastes.
Well that's about all for today. Have a Blessed evening.
Lisa
"And on the seventh day God ended His work which He had done, and He rested on the seventh day from all His work which He had done." Genesis 2:2
Posted by Lisa at 10:21 PM