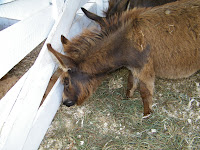 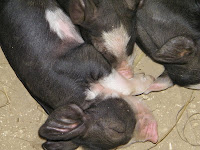 You know when you could avert a possible disaster yet nobody will listen to you? Well this happened to me last night. Let me tell you guys a little story. We have been battling bats in our attic for 17 years now. When we think we've licked them, they come back. So it was time to attack the problem one more time. Hubby had an idea where they were coming into the attic, so two weeks ago he asks me to bring a large can of Mono expanding foam and a long hose that would fit the nozzle, because the little one that comes with it isn't long enough to reach the cracks he needs to get to. So I bring the said Mono and hose but asks my darling hubby, "Do you really think that the hose will stay on? There's a lot of pressure in that can."
"oh yes!" says darling dear. "it'll work great!"
"Ok." I mean what do I know just a mere female.
So finally last night he gets his dad's super tall ladder and waits patiently till the said bats are out of our belfry. While this is all happening I'm in the house contently writing my blog. I don't hear anything, everything seems to be going well.
He walks into the house and I ask (not looking at him, intent on my blog) "so how did it go?"
"Uh, well, ok I guess. I did have a little mishap though."
I turned to look at him. There, standing in the living room is my husband splattered with mono expanding foam all over his arms, his face and his clothes!
"What the heck happened?"
" Well, the pressure in the can was a bit too much for the hose and instead of going through the hose, it kinda backsplashed in my face."
I'm thinking, "didn't I try to avoid this two weeks ago?" Today we were still picking foam off of his arms and face. There is some all over the siding of the house also. Ahh well. At least this morning when the bats tried to get back in the attic they found their entryway blocked!
I played hookie from work today. Well, not really. I asked for the afternoon off so we could all go to the Annapolis Valley exhibition. We had never been. It was great! I saw a miniature donkey that I sooooo want to bring home to my goats, unfortunately, or should I say fortunately, she was 1200$!!! That's about 1199$ more than I have to spend on a donkey. It was so hot and the animals were all roasting in their stalls. Many farmers had set up fans to cool them off. I had forgotten my hat and I realized that I was getting a sun stroke so we all went into a barn to get away from the sun. After all the rain we have had this summer, I never thought that I'd say that I was running away from the sun, but I was. We are supposed to get a category 4 hurricane this weekend. That'll be nice. I'm working. Ok,that's not nice of me to say. I take it back.
We also watched the miniature horse jumping. That was cute. Ohhhh, I need more money in my bank account and about 50 more acres of land.
Well gotta go to sleep.
Have a Blessed day.
Lisa
Posted by Lisa at 9:50 PM