Batten down the hatches! 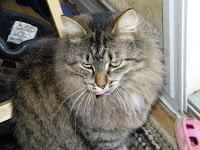 I'm officially on vacation for a week! Woohoooo!!!! While I was at work today, hubby tied everything down that could be tied down. We are supposed to be getting lots and lots of wind and about 100-150 mm of rain in a 24 hour period. This should be interesting.
I've made some slow cooker granola so we'll have something to eat in case the power goes out. Really it's just an excuse to make it. It's so good!!! If any of you want the recipe I can post it.
Dave gave the piglets their second shot of iron today. Momma was not happy!! We are doing this farming as humanely as possible. We beleive that happy animals are healthy animals. We are in no way, shape or form vegetarians, but we don't think the animals destined for our plates needs to be mistreated and abused. So in saying this, we are not using farrowing crates with the pigs. The local pig farmer didn't think it could be done. He kept telling Dave that she was going to have the babies outside or she was going to kill them by stepping on them, yada yada yada. We only lost one and it was because of our stupidity. But in saying this, no farrowing crate does make things a bit trickier. Like needling 9 piglets with a 600 lb mama trying to eat you! So he had to lure Charlotte with Oreo sippers (her favourite snack) outside then close the door.
Needless to say there was alot of squealing going on in the barn and alot of barking going on outside the barn. (Pigs bark when ticked off!!)
But everything went well and they are all happy. Dave is a bit worried for Charlotte. He finds that she's not eating and drinking enough. But she likes her veggies and fruit and the pig farmer told us that she needed pig ration. She didn't like it. So when Dave gave her the usual veggies she gobbled it down. But I also think with all this heat she's just too hot to eat. The goats aren't eating like they used to and they don't weigh 600lbs and 9 babies running after them!!
Well it's time to sign off and hope we don't float away!
Have a Blessed evening
Lisa
Posted by Lisa at 9:10 PM