I don't know where to begin. 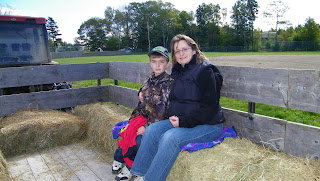 J. and I on a hayride last week.
I have been dreading this post. I have no clue where to begin. It's been so long. Well I'll try to start at the beginning.
We've known for some time now, that there were changes coming at Dave's work. We've known since last summer, but we had no clue what was going to happen.
Then we found out what was going to happen. We almost wished that we were still wondering.
One thing was no more bringing the truck at home. So that meant that we'd have to get a second vehicle that we could NOT afford. Including the gas and maintenance. He'd have to drive to get the truck, which is an hour away (on a good day). So he'd have to leave at 5am and only get home at 7pm. There goes family time. Plus....he'd have to start working nights also. So once again, there goes family time. Also, he's not on propane anymore, he's on an oil truck. He doesn't mind that, but he's got a bad back and pulling a 100lb hose everywhere is not good for him. 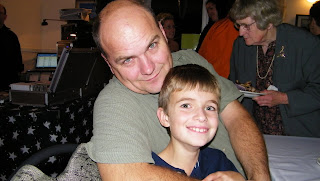 Dave and J. at a friend's wedding last week.
So after the initial shock, we regrouped and figured out what we were going to do. He started looking for work elsewhere, which is hard to do, since he's been with this company for 18 years. He loves his job and the company. It was a very stressful time. He even sent resumes to Alberta. This was a last resort kinda thing, but still an option. He would live there and commute here every several weeks. The only good thing about that option, was that I'd be able to quit my job and stay home, since he'd be paid mega bucks in Alberta. But I'd rather just keep my job and keep my hubby at home.
After several weeks went by, the company changed their mind and even though, he was still not on the propane truck, they could keep the trucks at home and travel with them. So that meant we didn't need another vehicle. Phew! Then they changed the schedule again and the night shifts, were changing, 2pm-2am. That's much better! (I'm not being sarcastic here) This way it meant that he could get some sleep at night, see us a bit in the morning and then go to work.
We were very concerned about the safety of night shifts. They go for 2 days and then 2 days off. So you'd never get your system used to staying awake at night and sleeping during the day. It would have been half bad if it was like the city drivers, their stops are close at hand, so they're in and out of the truck constantly. The drivers down here, can drive for 2 hours before they get to their first drop, lots of opportunities of falling asleep at the wheel.
So we're happy with the 2-2. It's not perfect, but it's livable.
During all this stress, I started making soap. Lots and lots of soap. So much soap that 2 stores approached me to sell my soap in their store! I approached one store last week and she was thrilled to have it and she also makes home parties (it's a home decor store) and she wants to take it on the road with her! Well needless to say, we were on cloud nine!
But not everyone was happy. A friend of mine who was also making soap, accused me of stabbing her in the back! How, I'm not sure. I'm still trying to figure that out. She says I went behind her back and made soap and sold it. Ahhh..... no I didn't. I blogged once that I was making it. I put photos of it on my Facebook page. I wouldn't say, I went behind her back. I'm not using her recipe, I don't even know what it is!? I found my own on the internet.
Now she's slandering me and Dave to everyone that will listen. Supposedly 5 of my friends on facebook , have dropped me as their friend.
This summer she stopped talking to me because, someone had reported her and another goat person to the authorities for selling illegal yogurt and cheese. They said it was us. It wasn't. But it seems like Dave and I are everyone's scapegoat (pardon the pun).
So this stress added to the other stress of Dave's job, didn't help matters. So can ya'll see why I wasn't in the mood to blog?
Well I think that's enough for now.
It'll be easier to get in the blogging mode now.
I'm off to the doctor's to get a cortisone shot in my heel. Ouch!
Have a Blessed Day.
Lisa
Posted by Lisa at 11:51 AM 3 comments:

It's been awhile, but I'm not gone to the big farm in the sky. I will blog more later on.
At the moment we have been under an extreme amount of stress for the last 2 months. So needless to say, when you're stressed blogging is the last thing on our minds. Add to this stress that a few people have been giving us some grief. 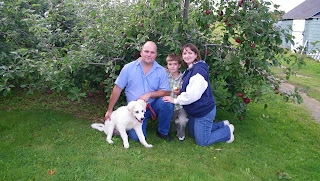 So later on I will post more, just keep us in your prayers.
Have a Blessed Day.
Lisa
Posted by Lisa at 9:21 PM 4 comments: