The garlic is growing, and the reason for the tomato cages is because... 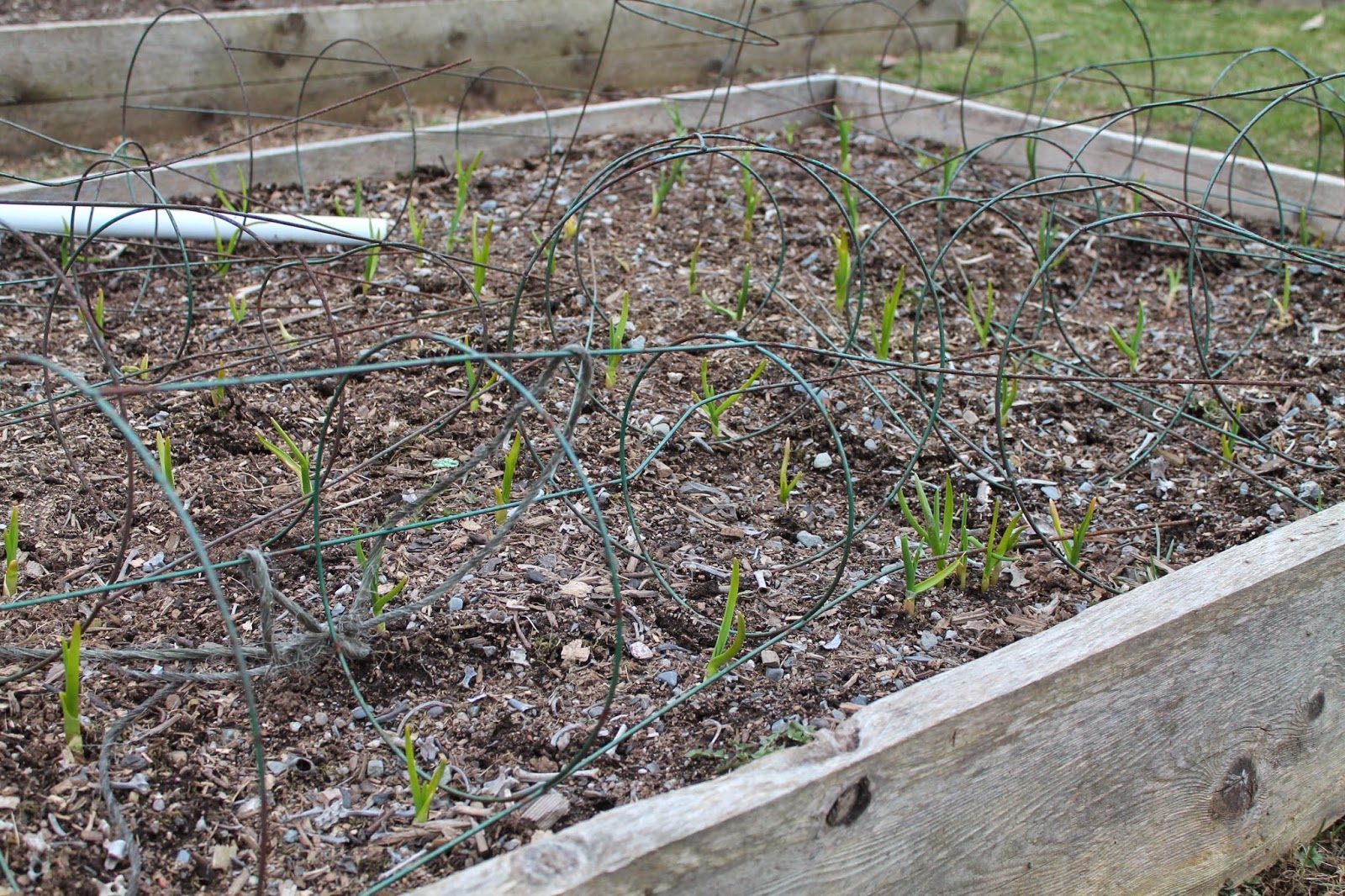 The chickens are free range again. And they'll eat every little green thing they see. 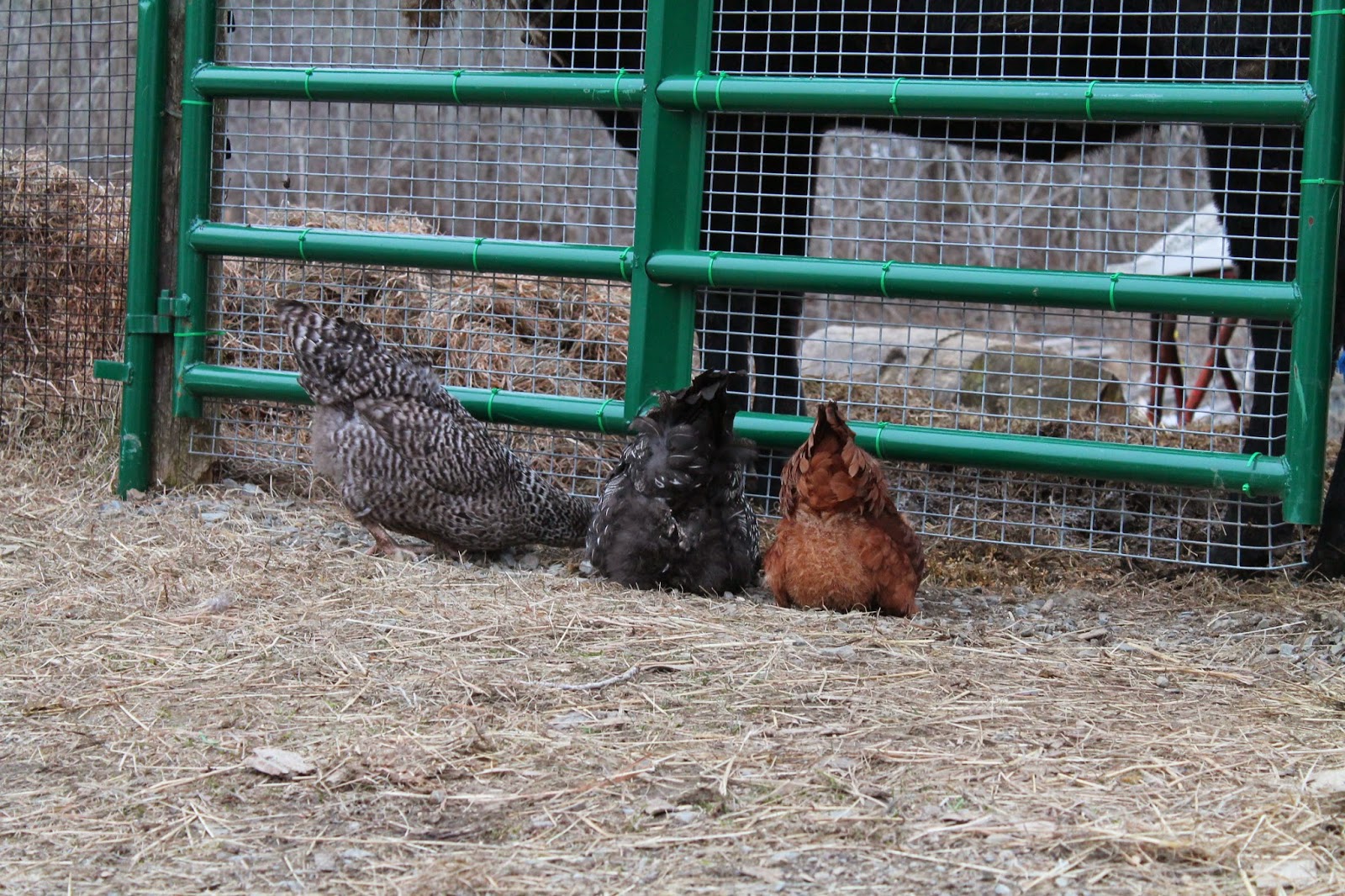 Daisy is "over the moon!" about being outside again.
It doesn't look like it, but take my word for it...she's happy. 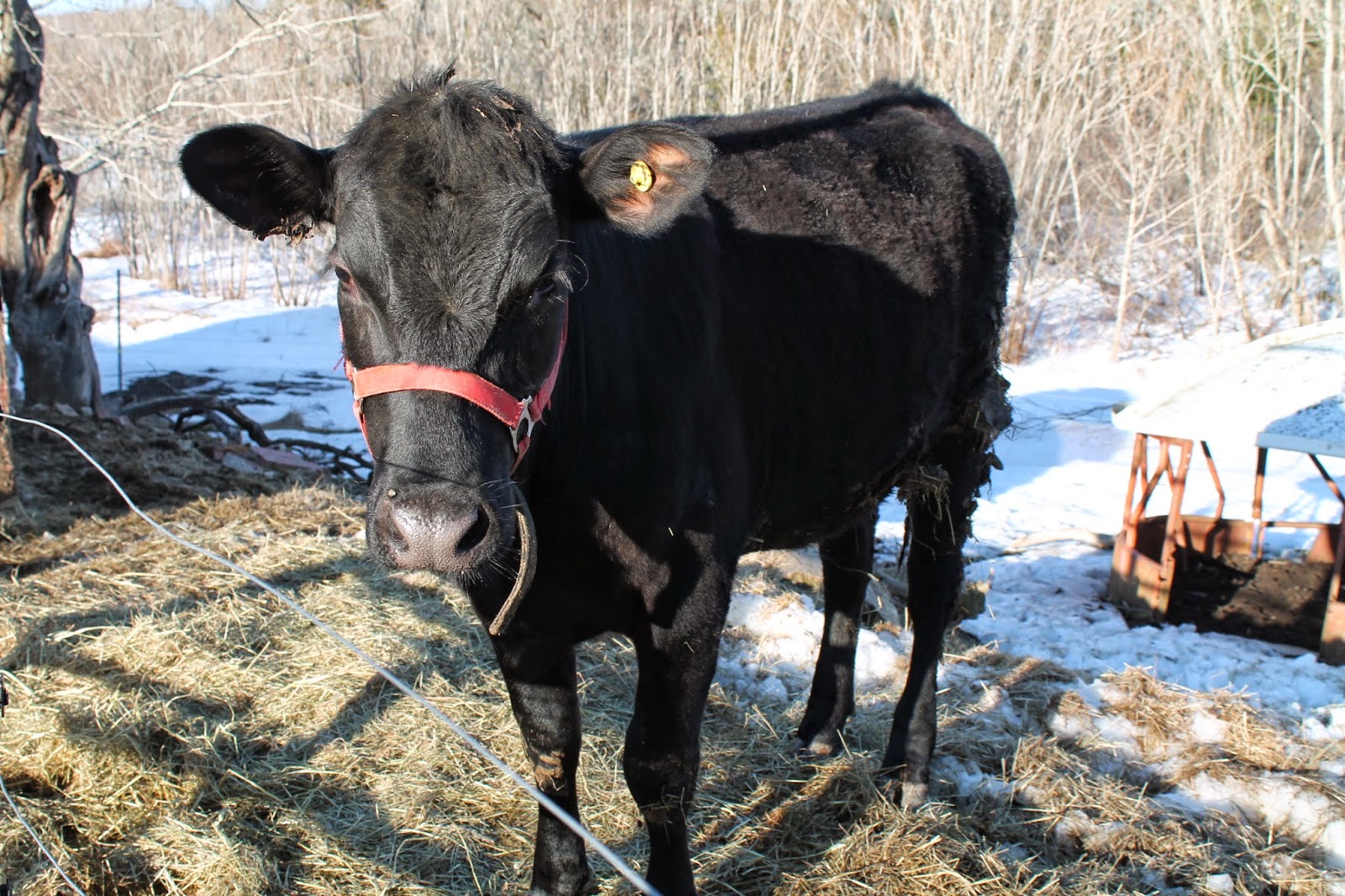 And Peeper is singing the praises of no snow, well not much snow anyway,  longer days and warmer temps. Hallelujah!!!!! Everyone is in a better mood. 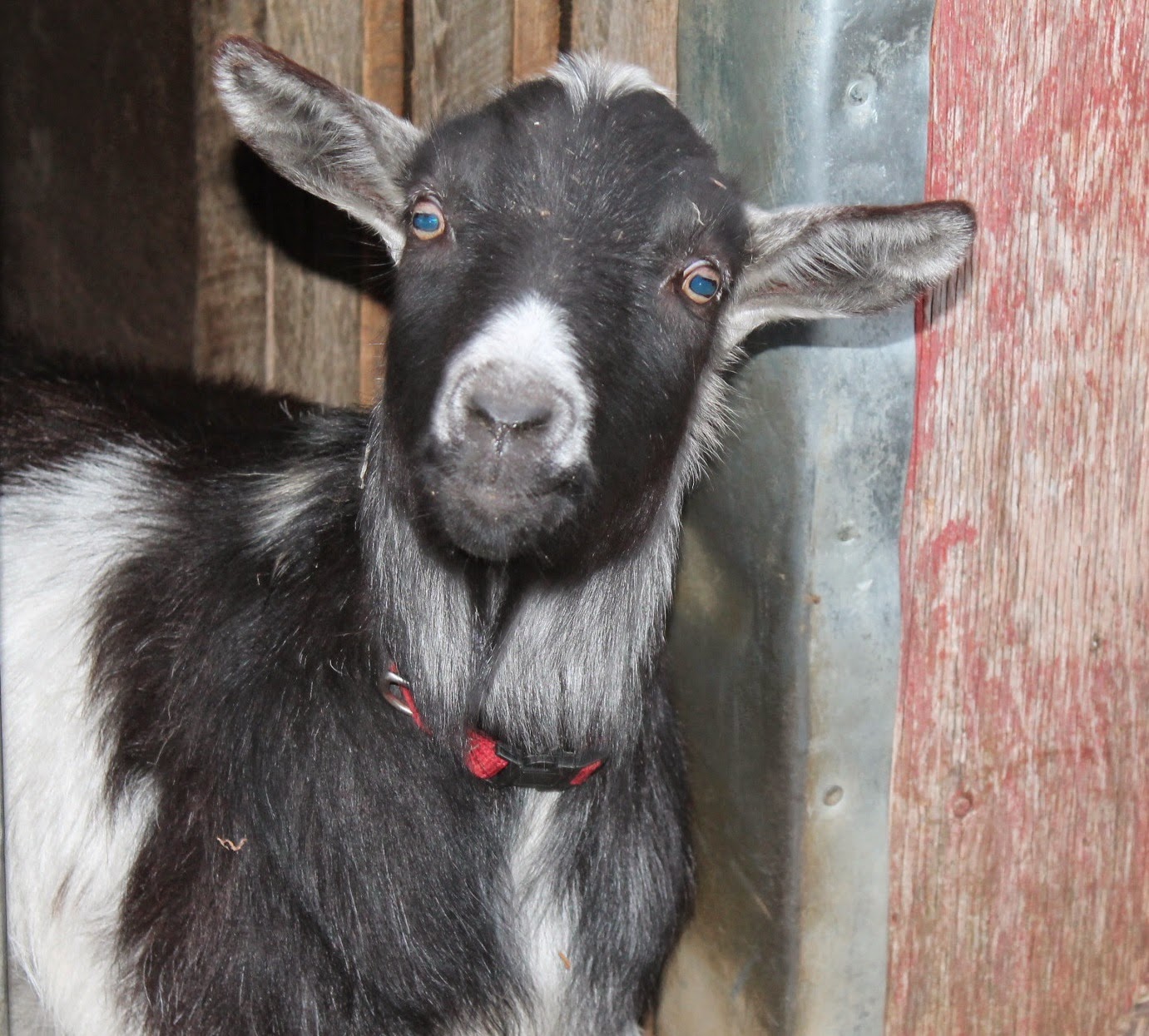 Have a Blessed Night!
Lisa

Earlier this winter we had the misfortune of having to put Pisnak down.

He had major issues with his joints and hooves.  We figure that when he was a kid we had fed him milk from Febe that contained the CAE virus.  So even though he was a wonderful buck, I couldn't stand to see him in such pain. We even tried pain killers but it got that even they didn't work.
So we chose to euthanize him.  Such is life on a farm.
It's sad, but it happens.

We decided to get another buck from where we had gotten Pisnak.
A while ago when Hazy Day farm got a new doe I contacted the owner, Alex, that someday I would be getting a buck from that doe.  Little did I know it was going to be sooner, rather than later.
The minute we found out that Pisnak was going to go to the great pasture in the sky, I contacted Alex to put in our order for a new buck from that doe.  He wasn't cheap, but after while you have to decide if you're going to breed just for milk or for milk and quality goats.

So fast forward 5 months and the future herdsire of Spring Peeper Farm is born!!!
He's more beautiful that I imagined!  He's going to make beautiful babies!
He's in another province.
He's a three hour ferry ride and overnight stay away (since the ferry only crosses once a day)
or a 6 hour drive one way.....:(
We tried to arrange transportation but with our crazy schedule, Easter approaching and Alex's crazy schedule it was proving to be impossible.

Finally Dave said, " Let's bite the bullet and go on a Round Goat Trip!"
So last Saturday we left at 6 a.m. for Moncton, New Brunswick.

It was a beautiful day with only a few flurries in the forecast...yeah, we've heard that before.
We actually made record time getting there.  We were supposed to meet Alex for the "drop" at 1:30 and we got there at 11:30.  So we ate lunch and then just sat in
the Irving parking lot waiting for the  "drop".

Alex arrived on time and we did the exchange, goat for money. Took pictures, exchanged a few pleasantries and we were off again.

Well that was before Dave spotted a HUGE and NEW Princess Auto.
So we stopped and Dave shopped.

We left and then had to stop at a pet store so Jamie could buy some fish.

By this time is was 5ish and the clouds were closing in.

The road was still kinda clear, then about 10 minutes out of Coldbrook we were met with this..... 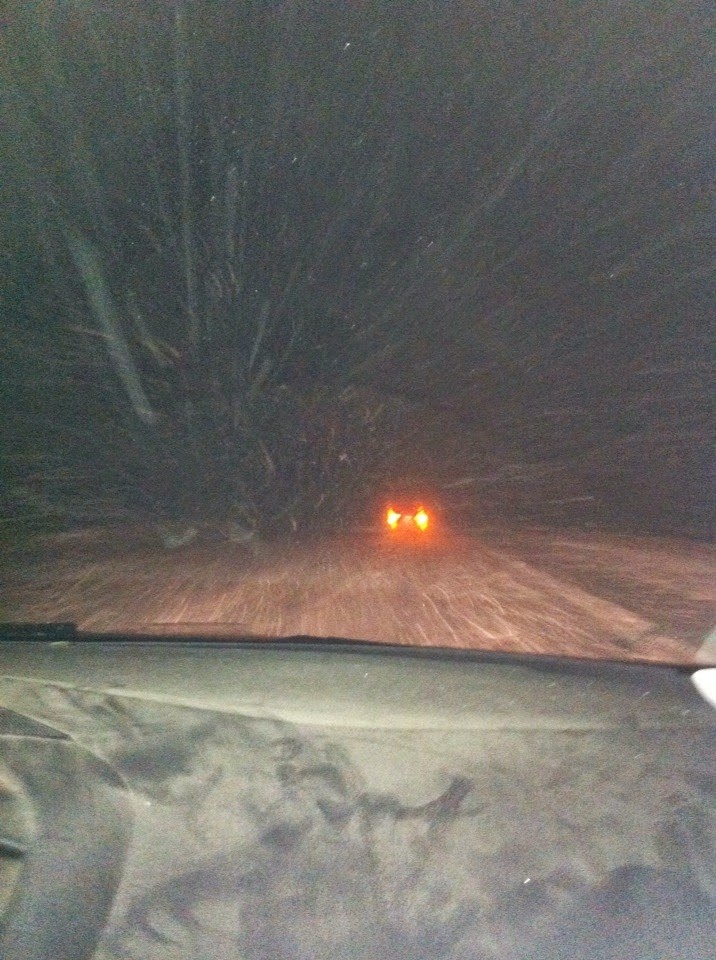 What should have taken 2 hours took 4!!!  We got home a few minutes before midnight.

The picture doesn't do the road conditions justice. It was even worse than what it looks
like in this picture.
But we got home safe. Thank God!

So the new bucklings name is Hazy Day Something Special  or as he's going to be known to us...Peanut.

There's a story behind why we call him Peanut.
But that's for another post.

The Winter from Hell!

I shall speak one more time about this winter and then I'll stop.

This has been the worst winter since I was a kid.

It just did not want to stop snowing.

These pictures don't show exactly how much snow we've had.  Usually in this neck of the woods we'll have a big snow storm...the snow will last a few days, then rain.  And that will be the pattern till March when it pretty much just rains.

Let's put it this way, last year on April 18th I actually planted most of my veggies in my raised beds. By looking at the following pictures does it look like I'll be doing any planting anytime soon?

Ahh....no.
The last few days we've had sun, so some of the snow has melted.
But I still can't get to my birdfeeder.  I've just been throwing the seeds on the snow.
Then this morning I thought, " Oh My Word! When the snow melts I'm going to have weird grass growing where I threw the seeds. Crud.

But God knows what we need and obviously He thinks we need snow.
It's giving rain for Saturday!
Awesome.
Everybody has run out of places to put the white stuff.

About two weeks ago while we were having a particularly bad snow storm..again. I turned to my co-worker and said, " You know what I just realized? That we're going to have to go through winter all over again next YEAR!AHHHHHHHHHHH!!!!!!!!!!!!!!!!!!!!!!"

She just said, " we'll cross that path when we get to it."

By July it should be gone....right?

I think I'm going to cry.