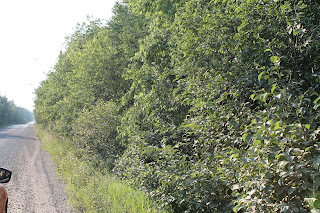 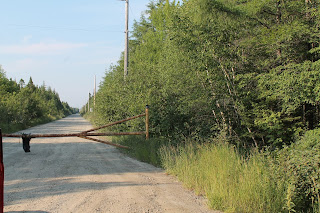 Every year we see in the local newspaper land tax sales.
Property sales of people who aren't paying their taxes.
They haven't paid them for 2 years.

So every year there's some in the paper.
This year we thought we'd give it a go.
See how it works.
We had a little bit in the bank and like Dave said, "they aren't making anymore land"
It's hard to get land...well affordable land anyway.
An investment.

So on a cold March day we marched into the municipal office for our first tax sale.
It was a bit intimidating at first, since most of the bidders were
wealthy, seasoned landowners and business people.

We had our eye on three pieces of land.  We actually won two!!!!
But even after the land sale, the property owner still has 6 months to come up with the money.
In my opinion, if you're two years behind in your taxes, you shouldn't be given another chance.
But that's me, I'm mean like that. ;)

So after a month or so, we lost one of the properties. Bummer.
It was my favourite one.

Oh well. This must be where they get the saying, "You win some, you lose some."
Ok, maybe not.

So Friday we got the official letter stating that the property was ours!!

I do want to clear cut it, but to plant Haskaps.

He's not sure what to do with it.

So, dear readers...you'll have to stay tuned to see what's going to become of our
newly acquired land.
Just a head's up.....
this could take a while.

Every once in a while you come across something so fantabulous that you have to share it with someone.

I'm sharing this with you!

But Dave had heard of a little place on the Yarmouth Waterfront that was good.

So we were in the area a few weeks ago and decided to try it. 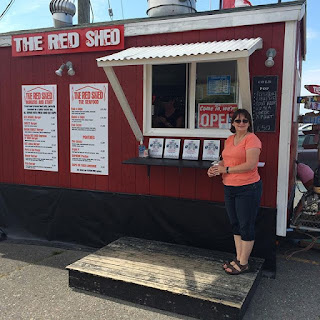 Jamie and I had the fish tacos and Dave had a poutine. The people with us had the clams and chips.
I can't even begin to describe how good the fish taco was.

It was made with shredded haddock and all the flavours just melded together. It also came with a hot sauce on the side.  Word of advice...the tiny little container of hot sauce they give you is more than enough for two people.  Phew...it made my eyebrows sweat.

Dave said that the poutine was great also.
The only downside it that they're only open in the summer.  I'm not even sure if they're still open at the moment.  BUT I HAVE GOT TO FIND OUT!!!

I need one more feed of tacos! 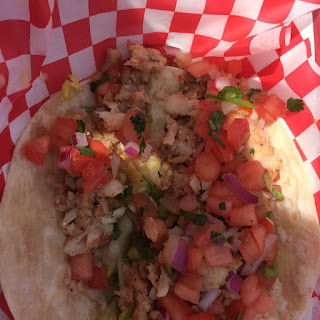 Oh and the service was awesome. That helps a lot.

So what more can you ask, out of this world food, great service and reasonable prices.
You Gotta Eat Here!