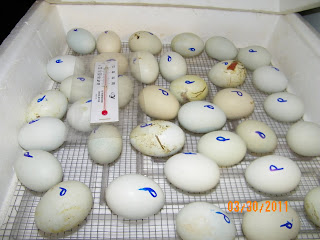 Just in case that spring is thinking of not showing up, well....I'm planting seedlings and putting eggs in the incubator. I'm trying to entice spring to stay. I'm hoping that I'll be successful. 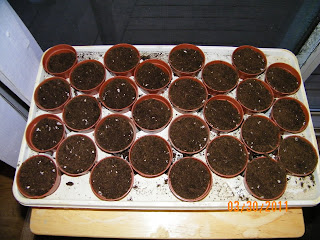 This year we are trying out brussel sprouts.
Even Bibi the hen wants it to stay. That way she gets to scratch around the yard every day. 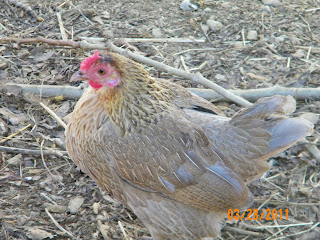 We are getting our calf Friday. The dairy farm called and one of their cows gave birth to a very big boy calf. It would have been better if we would have had him in a month from now, but you gotta take him when they're available. 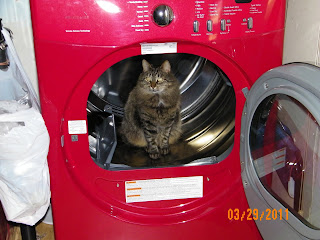 Our little church in the vale. 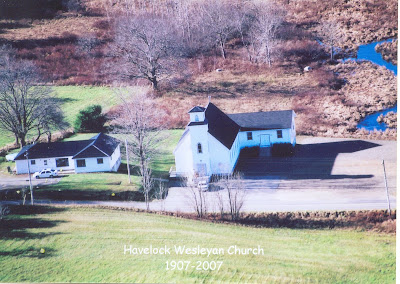 Havelock Wesleyan Church (taken in 2007)
Blogging is not always about happy things.
This time blogging is about a sad thing.
Some of you know that we belong to the Wesleyan church. Havelock Wesleyan Church to be precise.
Tuesday at around 6:15 our local fire department got a call for mutual aid to the Havelock Fire Dept. Dave is in our local fire dept. When he heard on the pager that the Havelock church was on fire.
Dave flew out of the house. He was afraid for the pastor's kids. You see just 1o minutes before he had called at the parsonage and he knew that two of the kids were at home alone (FYI they are old enough to be at home alone in case anyone is wondering). He was scared that they were in the church. By the time our fire dept got there this is what they saw... 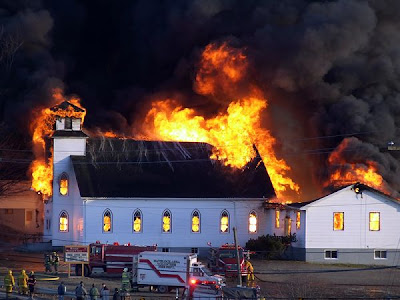 (Glen Mullen photo)
Five fire departments fought valiantly till the wee hours of the morning to save the parsonage. Needless to say, nothing could be done for the church.
Our little church in the vale is gone. Nothing is left.
I am having a hard time writing this. I know it's just a building and nobody was hurt. The parsonage was saved but still.....
A friend took this video. This was when he arrived on scene.
Within 14 minutes it was mostly gone.
It was our second home. So many memories are in there, not to mention all the records of every marriage, baby dedication, deaths etc....for the last 100 years.
The church structure is gone, but our "Church" is still here. We will prevail.

(karla Kelly photo)
Sunday we had a service in the parking lot. It was bitterly cold, but nobody minded. We said our goodbyes to our church.
I hadn't seen it in person, only in photos. When we crested the hill I just bawled like a baby. What is it about becoming a Christian? I never used to cry at anything before becoming a Christian. Now I cry at everything. Oh well, I'd rather be a Christian cry-baby than a tough athiest.
The strange thing about all of this is that the Sunday before we only had half power in the church. The power company had been called. (Just to clear something up, the cause of the fire hasn't been determined yet.)
Dave, J. and I got to church late so we had to sit in the balcony. Half way through the service Dave asked me if I smelled something. I did smell something funny. Nothing like a grass fire (like everyone was doing these last few weeks). It smelled like smoldering plastic. We asked other people if they could smell something, but nobody else smelled anything.
Maybe it was a look at something ahead.
Have a Blessed Day
Lisa
Posted by Lisa at 1:32 PM 2 comments:

Spring is in the air! WOOOHOOO!!!!
First day of spring and it was a nice one. I let the cannibals loose this afternoon and they were all happy as clams!
This is another problem we have here on the farm. This year our chickens a.k.a the cannibals, are eating their eggs. We almost have to catch the egg coming out of their butt if we don't want them to peck at it! It's very aggravating! 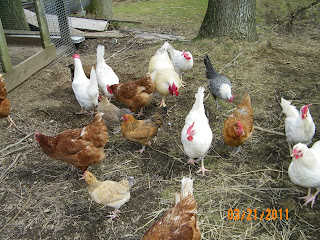 The cannibals!
A few days ago, Dave had taken the eggs out and left them on a shelf in the barn. I didn't know this. I let the cannibals out of their pen to enjoy the sun. The barn door was also open. While I'm making supper I tell Dave, "Oh, look at that! Aren't they cute? Those two hens must have found something to eat on that shelf! Cute!!!"
So Dave comes to see the show and yells, "Their going to the fricot pot! That's it! Their done! That's eggs I left there! They're eating the eggs!!!" 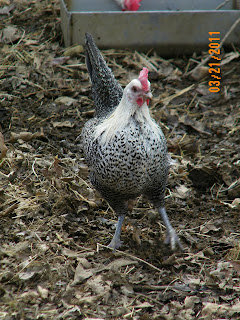 The single cannibal
Then he runs out screaming, "I'm going to wring their scrawny little necks!!"
But they were gone by the time he got there. Phew!
Speaking of cannibals...Dave and J. have started eating frog legs!! I mean that is so wrong on so many levels! For one thing, we are Spring Peeper Farm...The peepers on the farm should be carefree...not worry about the owner coming and eating their little legs! Think of all the frogs around on little crutches!
Second! I'm French...I'm not eating my cousins! That is like the chickens! It would be cannibalism!
Okay, I'm pushing it, aren't I? Oh well, I'm still not going to eat some. J. is too much like his father. He'll try anything once. Ugh.
Saturday, while I was at work Dave was a busy little beaver. He cleaned the chicken coop (after the whole winter yuck), cleaned the goat pen AND tilled the gardens! He also discovered the carrots I had left in the garden to over-winter. He discovered them BEFORE he tilled. 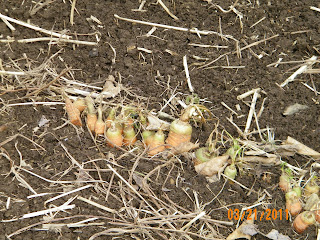 My overwintered carrots
I was afraid that they were going to be mushy, but alas! They are very good and firm.
We have come to the conclusion that we are going to have to get a shock collar for Tundra. I have been fighting this decision for a long time. We have tried everything to stop her from "playing" with the goats, but it's gotten down to the point that she is going to hurt them if we don't do anything. She's already hurt Cindi Lou once and we had to bring her to the vet. I know to her she's just playing, but the goats don't appreciate it. It's gotten to the point I'm afraid that she might make one miscarry. 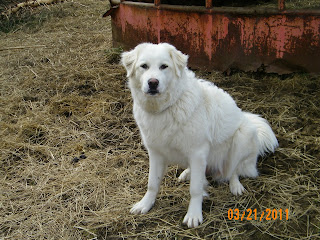 Bad girl
We've been told by several people that these collars work well. She's a very smart dog. I don't think we'll have to use it long on her before she gets the point. We are definately not going to use to high settings. I'm hoping the vibration setting will work.
Cindi Lou is just about back to normal. She had a severe kidney infection. The urine sample I brought to our local vet looked like a cross between red wine and grape jelly. Not good.
But after a week on anti-biotic shots, her urine is fine and she's eating well again. Somehow she got her back leg hurt this time. I'm assuming it's Tundra again. My coworker's daughter is going to university to become a vet. I told her I could save her a whole lots of money. Get goats, by the time your done, you've pretty much done everything, know everything and tried everything in the veterinary sciences! 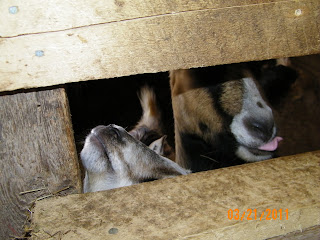 This is what I have to deal with when I come in with treats!
Cindi Lou is starting her udder already! She still has 4 weeks to go. I think she's going to be an excellent little milker. Already when I put her in the milking stand she just stays there. When you put your hand on her belly and then her udder, she does that little goat squat like she wants to be milked. She doesn't kick or squirm. I hope it lasts.
Today I noticed that I had a weird thing on my ivy outside. Can anyone identify this? I didn't think that ivies had seed pods or flowers? What do you think? 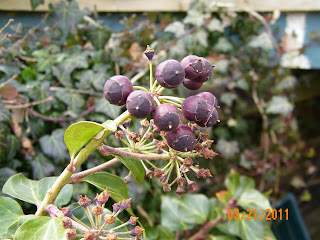 Well I think it's time for bed. Our belly dancing instructor was hard on us tonight. I'm pooped and sore.
Have a Blessed Evening.
Lisa
Posted by Lisa at 9:44 PM 3 comments:

Cindi Lou is still not doing well. Her shoulder is doing well, but she's still not eating and she's been peeing red. Not good. The vet has us giving her vitamin shots and penicillin shots. She'll eat tiny amounts of dulse and that's it.
Nothing more. We are at our wits end. At this point I'm not worried about the kid anymore. I just want Cindi Lou to be healthy again.
It would be a shame if she would lose the kid being only 4 weeks away, but sometimes you just have to look at the greater good of the situation.
Sorry I haven't been posting photos, but it's been hectic here the last several days. I've been gone to a hockey tournament with J. for the last 4 days. They came in 4th. Which is good for them. 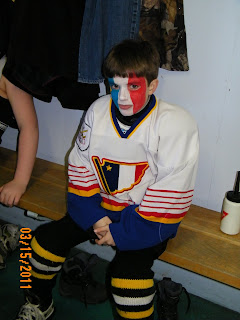 I call him bumblebee legs!
While we were waiting for the game, we got J.'s face painted for our Acadian flag. It kinda freaked out the opposite team. Heh heh.
Have a Blessed Day
Lisa
Posted by Lisa at 9:33 PM 2 comments:

Email ThisBlogThis!Share to TwitterShare to FacebookShare to Pinterest
Labels: Cindi Lou Who, hockey

What I do for my goats!!

We've noticed a few days ago, that Cindi Lou had a pronounced limp. She was also not eating well. So yesterday we packed her up IN THE CAR! and drove 2 hours to the goat vet.
Well it's not her leg, it's her "shoulder". He gave her an injection of anti inflammatory meds and instructions and meds for 2 more doses. He figures it's her nerves in her shoulder that somehow got aggravated.
He also "bounced" her and she's really preggers. I'm glad to have that confirmed. He could only feel one, but that's ok. Other than that he said she was the perfect size for her age. Not too fat, not too skinny.
He also gave me advice on feed and hoof trimming. He said we were doing a great job, but just one spot we missed. An hour's worth of vet brain for the bargain price of 76$!! He's so good and inexpensive. He's worth the 2 hour drive even at the price of gas!!
I just wish he was closer. The vets around here have NO clue about goats, only cats, dogs, horses and cows. That's the extent of their knowledge, which is really too bad since there are so many goat people around here.
Other goat friends of mine, have had 3 does miscarry. Not good. Then another one had triplets 2 were stillborn. They are having hard luck this year. It must be so discouraging.
I just hope that Cindi Lou makes a full recovery. She's not eating still and she needs energy for the baby. If she's still not eating by tomorrow or Monday I'll have to make another trip up, but the good thing is that I'll only be 2 minutes away from the vet since J. and I are leaving tomorrow for a three day hockey tournament in that area.
Have a Blessed Day!!
Lisa
Posted by Lisa at 8:07 PM 5 comments: