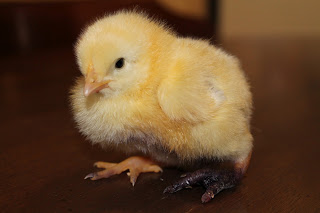 Argh!!!Leave it to Blogger to screw up a nice photo!

We've gotten our chicks for this year.  We got Meat kings and laying hens.  The problem is that the coop needs to be enlarged and yet nobody can make it bigger.  Not sure what gonna happen there.

For the last few weeks I can't see everyone's wonderful photos. Something is screwy with my blogger account. Is anyone else having this problem?  I thought it was just me trying to see other photos, but tonight when I upload one of my photos I see that it's doing it to me too!

The point of this photo was to show the chick's leg. It's all swollen, so I sprayed it with Blue Coat (and my fingers at the same time.) and brought him in the house.  J. was all in a panic because the other ones were picking on it. So we're going to try and save him/her. But now you cannot see the leg in the photo...or can you?  Let me know.

Also let me know if anyone else is having this problem.

Happy Mother's Day everyone!  I hope ya'll like my mother's day gift.  I've been looking for a special pair of Wellies as the English would say, forever!  I finally found them when we were at the Spring Fling.


It's also Hubby's birthday.  We had won a 6 foot long sub from Subway.  So we thought we'd use it for this occasion and we invited a few friends. It was great!  I couldn't believe how big it was. It was not only 6 feet long but it was also wide like 2 subs. 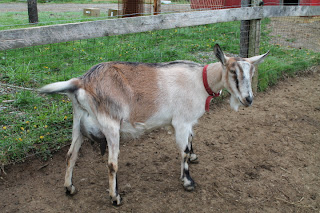 Things are always changing here. You never know what God is going to chuck at us next.

Well Dave got hurt on the job months ago.  He kept working through the pain but finally couldn't anymore. So the doctor made him stop.  He's on so many pain killers and sleeping pills that it would probably kill an average person.  It's still not stopping the pain completely, but he's living through it, as we all are.  But here lies the problem.  The insurance has not come through, we are being given a hard time through some people, the specialist hasn't made an appoitment yet, we are living on just my salary for the last month and the forseable future.  He can't do anything here on the farm and we can't afford to hire anyone either.  J. and Tomas (our international student) are helping a lot, but they can only do so much.  My hours at work have changed, so I am now working a lot more (which is good in the financial dept, but not the farm and home life).

So we are downsizing. Cindi Lou is sold. She's going to nice home on Wednesday.  Tundra is gone to another home also.  When all is said and done we will be down to one goat and a buck, plus the donkeys. It may take awhile but by next spring (maybe sooner) that is our goal.  Some days I'm so tired that I want to get rid of everything.

So that's how things are here now.  I hope I don't sound to depressing for Mother's day...but blogs are not always about happy things.

Have a Blessed Day.
Lisa

We do all our own disbudding. We also do it for other people.  Hubby is really good at it.

I can't even be in the same room most of the time.  I usually serve tea and coffee to the human parents of these kids.  Because most can't handle it also.  Unfortunately it's a necessary evil of goat farming. Especially if you're selling them to 4Hers.

Dave did Pisnak when he came here, but for some strange reason one side grew back. It grew wrong, weird and pointy.  We were able to get him in the disbudding box and redo one side, but he didn't dare do the other side.  Pisank got too strong and we couldn't hold him in the box safely without him getting hurt.
Sooooo....guess what!?  Goat god extraordinaire showed up tonight at 7pm to fix Pisnak's horn.
I was having a meeting in our kitchen with the manager of the local farmer's market about selling my soap there also.  So I couldn't go out with Dr. MacHattie and Dave.  This was maybe a good thing.
Dave came in after and said, "You should be happy you didn't see that. He used big bone nippers.  and you could hear the crunch of the horn. "  Shudder...

Thank goodness he was under anesthetic. Maybe Dave should have been also.


We had to keep checking on him to make sure that he didn't roll on his side while he was "out" so he wouldn't get bloat. We went to check on him about 15 minutes after the vet left. He was already up and about. But he had a pitiful cry. We sprayed Blue Coat on him and left him to sleep the rest off.  In case you're wondering...he's on pain killers and he left us more just in case.  He'll probably have one heck of a headache tomorrow.

I can hear him now, "I didn't think I drank that much.  Hiccup! Maybe that grain was fermenting. Give me a Tylenol!"

Have a Blessed Evening.
Lisa
Posted by Lisa at 9:26 PM 1 comment:

I want to introduce all of you in bloggerland to my new best friend!  Please meet......

She's come into my life this last week. Really it was quite unexpected.  We were first informed of her existence by our wonderful vet...Dr. MacHattie...goat god extraordinaire.  He informed us that a retired lady (retired from the wonderful, exciting world of goats) was selling her.  By my standards she was rather expensive. She wanted $750 for her.  I know, by the time we would have paid shipping, duty, taxes etc...Ms. Milker would have set us back $2500 new.  That was waaaaaaaaaayyyyyy out of our ballpark.  To the moon!!!  So new was not an option.  But this species is very rare to come by gently used.
So after examining, hemming and hawing, putting her on and off, checking her innards etc...we asked if she'd take $700 for her.  She was reluctant, but she liked us so she agreed.  We loaded her up in the trunk and off I went to my doctors appointment.

The story behind the doctor's appointment goes like this.  I've had lots of pain in my left wrist for years now. At first the dr thought it was osteoporosis but nothing would show up in the bone density tests.  A month ago I went for some x-rays.  My Dr. said that they had found cysts all around my wrist bones.  So off I went to an orthopedic surgeon for a consultation.

It turns out they think I've got stage 2 Kleinboch's disease.  It's nothing overly serious and it's not because I'm getting older (which is an excuse I love to use) because it actually affects people 18-40 years old.  They don't know why people get it. Most of the time it's because of an injury and the blood flow gets cut to the bones, but I've never had an injury on my wrists.  So for now I get to go for a CT scan, I get a splint and drugs.  When I hit stage 4 (which could be several years from now) and it's the final stage then I get to go for surgery and have my wrist bones fused together. Lovely.  It could be worse.
So guess what!?  I need to stop milking, I also need to stop handling paint cans, but that's not going to happen anytime soon, unless I win the lottery. And I don't play the lottery.
So with the Henry Milker I still had to pump occasionally.  So I'm going to try and sell it.  The goats don't seem to mind. Ms. Milker. Which is good. It takes a good 3 minutes to milk a goat. It's also more sanitary than the Henry Milker. Lots less to clean, so lots less to miss old milk in tubing. yuck.
She works like a charm. That's all that matters.  The goat is barely on the stand that it's done. You gotta love it.

The soap business is getting busier and I don't have time to make any. I have Dave making my soap instead. Not only do we go to the farmer's market, now a lady is going to a ladies conference and she wants to bring 30+ bars to sell.  She won't even take a cut.  So I have to get my butt in gear.

Tomorrow Dr. MacHattie is coming to fix Pisnak's scur.  We're not sure what happened there. It's not good.  I'll keep you posted.

Have a Blessed evening.
Lisa