He's pulling through his illness.

The vet came over Friday night and checked him out. She (Dr. MacHattie's daughter!) gave us extra meds, took his temperature, listened to his lungs and heart and did all the things that doctors do to sick babies.

She also took a sample home...if you know what I mean. Ewwww.

She called Monday to say he had no parasites or anything out of the ordinary.

So Woody just had the stomach flu. Go figure.

He's supposed to be down to one bottle a day of milk, but since he's lost so much weight I'm keeping him on two bottles a day for a few more days. He's still on penicillin because his umbilicus was swollen (I really should have asked what that meant!)

And another day of electrolytes and Kaopectate for a bit longer.

Dr. Nicole gave us a BIG bottle of Kaopectate. This way I don't have to run to every drug store in the area and clean them out!

It's kinda funny. Whenever I go in a drug store in the area now and ask for Kaopectate they know either a goat is sick or a cow.

People are starting to know me.

But all in all, Woody is doing A-Okay! 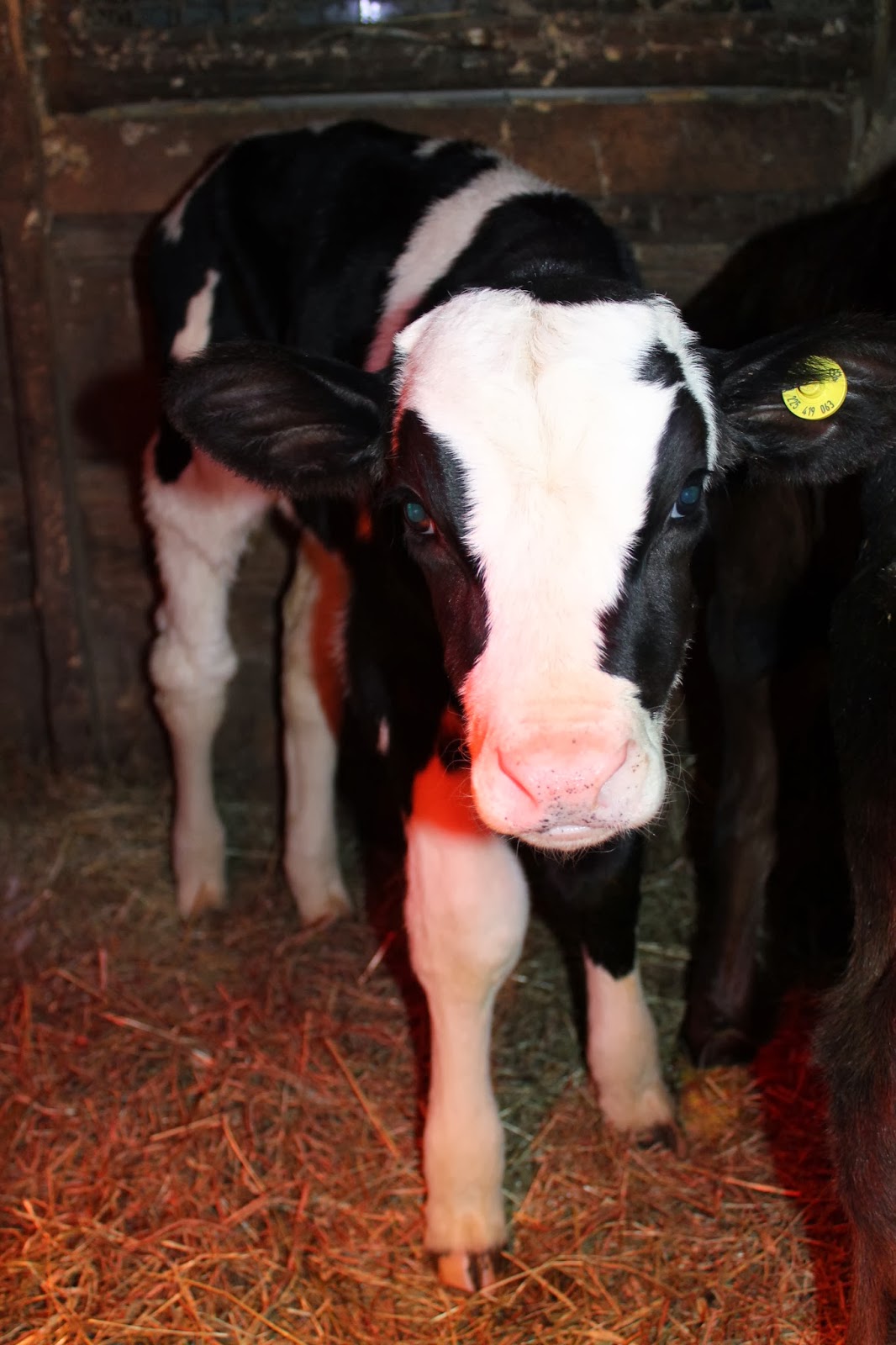 I'm in the wrong business!

One of the calves is not doing so well.
In fact we're not sure he's going to make it.

It came upon him quick also.
Daisy the heifer is fine, but Woody is sick.

He was fine yesterday morning, but by evening I noticed he was not getting up when I walked in the barn. That is strange for him. He's usually at the door bawling for food, like Daisy.

I called Dave over and he said the same thing. Plus Woody was trembling.
So we gave him a shot of penicillen and a shot of Newcells.

This morning is seemed like he didn't even want to suck on his bottle.
He only ate half his ration.

So Dave called the vet. He has no fever so that rules out pneumonia.
So he took orders from the vet and we put him in a stall by himself.
He's got the poopies in the worse way. So it could be anything.
The vet thinks maybe coccidiosis. So we're giving him Amprol.

But from late afternoon to after supper he went downhill fast!
Dave called the vet again (these guys are the best!) and she suggested Kaopectate and to make a homemade electrolyte solution and feed it to him on top of all the other things we're giving him.

Dave had to leave for a meeting so it left me to try and get a hardheaded sick (half dead) calf, that is still very strong, to drink disgusting medicine and a 2 litre of electrolyte.

So I got everything ready, got dressed in my barn clothes and told Jamie that I don't know when I'll be coming back in!

I marched into the barn determined to save this 3 week old baby!

I came out pretty much covered in cow slime, Kaopectate, electrolyte solution and probably poop.

But you know what...? I loved every minute of it!

I am one strange cookie, yes I know. I've been told this many times. I could do this everyday. I don't mind the slime, gook and gore of animals.

I just love knowing that I helped a helpless animal. I got him to take all the medicine and he drank most of his electrolyte solution.

But I actually think he's going to make it.

I told him that he's not going to die on my watch!

I'm praying that God will let him live because he is destined to feed many people.

It's probably not a happy ending for him, but it will be for the less fortunate this fall.

And my projects begin....a bit early

We had put our name at the local dairy farm for two bull calves this year. Like I mentioned in my last post, we're going to raise one for us and one to donate the meat to people in need.

I wanted the calves around mid February to early March. Because we do have lots of goats milk in a freezer in the basement (that's an understatement! It's a FULL freezer of milk) that's getting old and needs to be used up. So I figured it would get rid of most of the milk and by then the does would have kidded.

Well things NEVER go according to plan. Last weekend the dairy called and said they had two calves if we wanted them. I was like, uh, ummm well... but when they said one was crossed with a beef breed I said yes right away!

You NEVER get them crossed with a beef breed. That meant that one of them is going to have lots more meat on it when it's time for the butcher.

So Dave went to get them a few days after.

When he gets home he tells me that the brown one is a heifer!

They only want purebred Holsteins at the dairy and somehow one of the girls got in with a beef bull.
(Go figure)

I take one look at Daisy's (that's what I called her, not a bright move I know.) long eyelashes and think there is no way on God's green earth I can eat this cute little thing.

So I get a brainwave and tell Dave," We could raise her and breed her!!"

Plus the main thing is that she was sold to us on the condition that she goes for meat.
So we are people that keep our word and Daisy will go for.....meat this fall.
That just kills me.
Also, if I told you how much we paid for these two you would not believe it!! Extremely cheap. I'm almost tempted to get another one....maybe not.
Because after only being here for 5 days, the freezer is almost empty!!!
We're going to have to buy calf starter because I can't give the calves all the milk. I have soap orders to fill and I can't make goat's milk soap with milk I've bought from the store.
Ain't gonna happen.
So what we saved on the price of the calves we're going to pay in calf starter.

Oh well, it's all a worthy cause.
Have a Blessed Day
Lisa