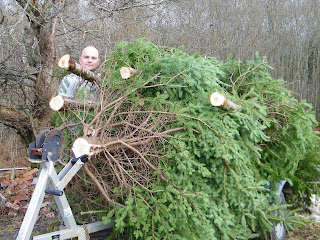 It's that time of the year again...Christmas tree time!
This year I couldn't wait till after Christmas to go get trees because since I think the girls are pregnant and due in Feb, that means that they need their trees now.
So off we went to the wood lot. We loaded almost all the trees that our friend, Andrew, had cut for us. The trailer was a bit wobbly, but we got home in one piece. 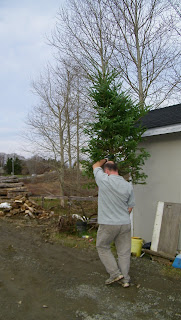 Honey dear carrying the trees to the pasture.
I know some of you will think I'm nuts, ok ya'll think I'm nuts. I got my mom to go to the dollar store and get me some pregnancy test kits. No!!!I'm not in the family way. I just figured if they work on women, maybe they'll work on goats. I mean for $1.25, what do I have to lose? So I used one this morning and nothing came through, not even the control. I did it again tonight. It came out negative. So I don't know what to think. Maybe I should google it.
Hmmm...that's an idea.
Gotta go!
Lisa
Posted by Lisa at 9:18 PM 2 comments: 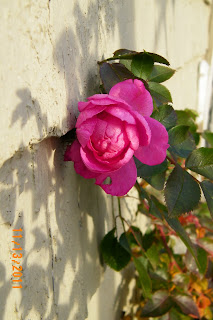 Who'd a thunk it? A rose in November.
Well the weather here has been wild and wacky for the month of November. Sunny and hot one day, freezing and windy the next. Or rain, rain and more rain. The chicken's run is just a pile of muck. Poor things. 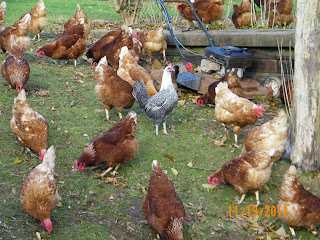 One of these things are not like the other.....
Speaking of chickens....we had a dozen or so brought to the butcher last week. Old layers. They make excellent rappie pie and fricot. We also got rid of Foghorn, since one of the Americanas is a rooster. We also put Mooocher in the freezer. Geez re-reading this sounds like we're massacring animals left,right and centre. 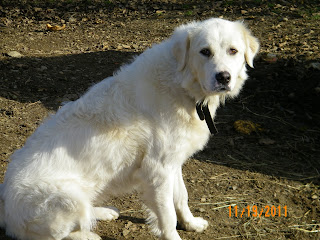 yes, she does look guilty
Tundra has been killing more chickens. I honestly don't know what to do. It's unfair to leave the hens locked up, but at the same time, it's unfair to them to let them get killed! What to do, what to do? 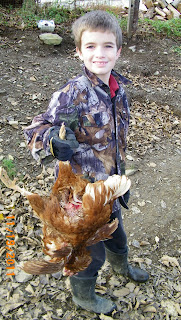 One of Tundra's victims
Since it's been raining constantly the last few months, the path to the barn is just wet, wet, wet. You need rubber boots to get there. So we got a load of gravel and put it down. Well it's better, but water is actually seaping through the hill. Not good. We're not sure if it's the well or not. 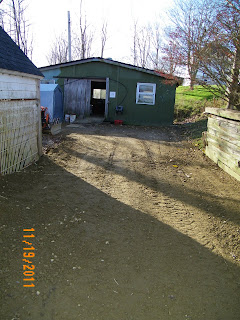 Nice dry path...for now
Christmas is fast approaching. I actually have the tree up! Yay for me!!
I thought I was going to have nice cabbage this fall....... 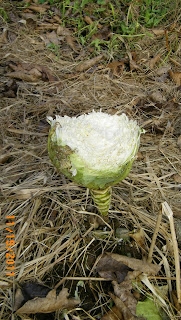 I guess not! The deer now probably have lots of gas. Good.
I interrupt this post for recent goat photos and one cute cat photo. 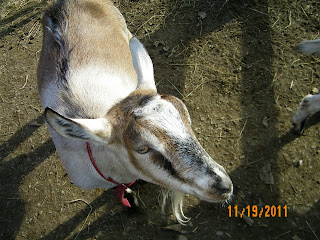 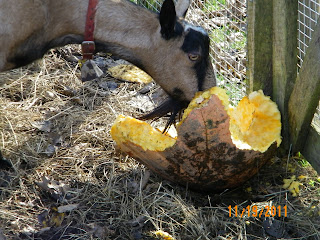 Febe chowing down! Hmmm and I wonder why they won't eat? 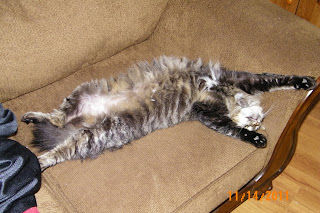 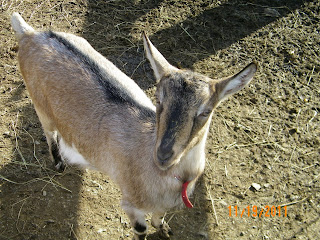 Today is Remembrance Day so that meant I had the day off. First thing we did this morning was attend the Remembrance Day services. We have to teach our kids what those soldiers did for us. So every year I bring J. to the services. There aren't that many kids at the services around here and I find that after today the veterans and the fallen seem to be swept under the rug for another year. I try to teach J. that we should keep them all in our prayers and thoughts all year long. I think that I am actually getting through to him. There was only another girl from his school at the services besides J. I found that sad.
Well it's time for the Spring Peeper Farm Cooking Show!!!
It has been brought to my attention that there is something else you can do with goat's milk.
FUDGE!!!
Now who doesn't like fudge. Especially a gal that has just come off a cleansing fast!! (Which went well btw. Allergies GONE! and 11 extra pounds!)
I found this recipe on this page.
It was really easy, but time consuming. Whenever a recipe calls for a candy thermometer, that means time. But I thought I'd give it a go.
1/3 cup unsweetened cocoa powder
1 cup goats milk
2 cups sugar
3/4 cup chopped pecans
1/4 cup butter
1 tsp vanilla
Mix the cocoa, sugar and milk together. Heat on medium to med high heat stirring till sugar is dissolved completely. 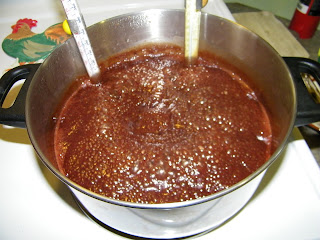 Bring to a slow boil and cook till it reaches the soft ball stage (234 F). Stir often to prevent sticking. This part took the longest. 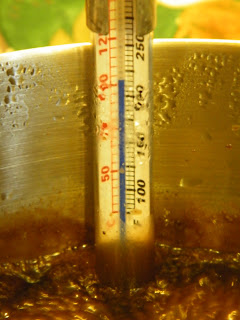 Almost there! Patience!
Remove from heat and add the pecans, butter and vanilla. 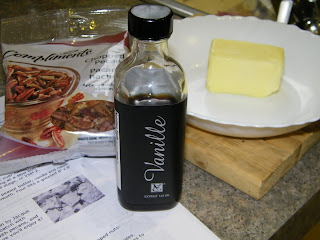 Stir by hand till it thickens and gets glossy. Spread in an 8X8 well greased pan and let cool. 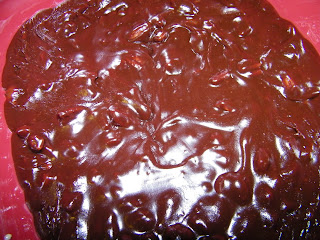 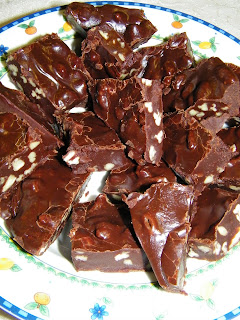 Give it a try. If I can do it, anyone can!
Oh my word! When it rains, it pours. Literally. It's still raining. Today it's giving 100mm of rain. I've been here almost 20 years and I've never seen it flood. This morning our little creek is flooding and the water is almost up to the goat pasture.
Speaking of goats... I was sure that Cindi Lou was sick again. She was limping because Tundra won't stop chasing the goats and she wouldn't eat her feed. I thought, "Here we go again."
Wednesday she barely ate and Thursday morning she didn't eat a nibble. I figured it she didn't eat by the time I got home from work on Thursday night I was going to take her temp and call the vet. Dollar signs just kept going through my brain.... I left her in her pen all day Thursday and when I got home she had eaten all her grain and was alert. I thought woohooo!!! I couldn't figure out why on earth she had been acting that way when I remembered.....
It's amazing what two 1oo lb pumpkins will do to the appetite! I had completely forgotten that the apple farmer up the road had given us all his giant pumpkins and I had told Dave to throw in 2 in the pasture. The poor goat was full and was bloated.
Coming back to Tundra...I honestly don't know what to do with that dog. She killed two young pullets last week and ate them!!! I was so ticked off and upset I didn't know what to do. Now I don't dare leave the chickens out when she is. Like they say, "when they get a taste of blood." A friend of mine said, "Maybe she was protecting the goats from the chickens, since they flew into their pen." Well, yeah maybe, but...that night, where Tundra sleeps there was a trapped chicken and she didn't even give it a second look. Of course not, she was full!
I'll never understand animals.
Have a Blessed Day.
Lisa
Posted by Lisa at 3:24 PM 2 comments: