It's all worth it!

It's been an extremely busy last few weeks.  Summer has just flown by.  I'm still wondering what happened to it.  We've gotten news of our new International student.  His name is Antonio and he's from Brazil.  We are excited to have him here. We're going to pick him up on August 30th.

As ya'll know we've had to decide what to do for a new chicken coop.  We finally decided to clean up the land where the old one was and haul a little shed we had on the property for the chicken coop.  I've always wanted it as a coop, since it's so cute.  But it was full of stuff.  So I've been cleaning it out.  Then with lots of help from different people we've cleaned up the land and brought the coop to it's final resting place.  I'm so happy! So are the chickens.  So far I've only transferred the Silkies and the Americaunas.  I'll transfer the brown comets in a few days.
Cleaning up the area around the old coop made such a huge difference to the property.  There was so much junk. Now it's on it's way to be neat!
One of the reason's for cleaning everything up, besides it just needed to be done, is we were getting company yesterday.

Some of the residents where Dave's parents are living now, Tideview Terrace, came for a little visit.  I had to work, but Dave and J, played hosts.  The day before I made goat shaped cookies and goat cheese for them to eat.
This is why we do what we do.  We love having people come and visit and when it can lift a person's spirit it's even better.  The following photos are worth every minute we spent cleaning, baking and cooking.
They were so excited!
I know some farms charge admission for tours.  We just can't.  It's payment enough just looking at the smiles on these people's faces.  Don't ya'll agree?!

Oh, one last thing.  Dave and I have joined the local Biggest Loser's group.  We're a team and we're going to win!  There. I've posted that so it now makes us even more accountable.  It lasts for 12 weeks. So I'll keep everyone updated on our progress.

Have a Blessed Evening.
Lisa
Posted by Lisa at 6:29 PM 3 comments:

The only posts I seem to be writing these days are hard ones.

Daisy didn't make it.  As much as I wanted for her to...she didn't.  Sunday she seemed to be doing well. We had been giving her antibiotic injections and cleaning the wound several times a day with peroxide. But I said to Dave, "We should bring her to a vet on Monday." I couldn't see the wound healing on it's own since it would keep opening constantly.  So she needed professional help.

Monday morning we called the vet right away.  This is not our usual goat god extraordinaire.

This is the great small animal vet at Bayview Animal Hospital in Digby, Dr. Neill Pothier.
Again this is a very compassionate vet, towards animals and humans.

I had an appointment so I couldn't go.  Dave and J. went.

Not only did she have that severe wound, she was also severely dehydrated and only half her weight.  She only weighed 5 pounds.  A normal, healthy cat that age should weigh 10.

-Let her be and bring her home like that and hope she heals some day.

Dave chose option number 3.  I hate to say it, but we just couldn't afford it.  I just hope nobody will think badly of us.  J. cried and cried.  Dave felt sick over his decision.

So the following pictures are very, very graphic.  They are to serve as a reminder and a warning that you should never, ever put a collar on a cat.  The vet agreed with us.  The collar Daisy had on was a stretchy one.  The ones that people think are safer.  They aren't! No cat collars are safe.

If you see anyone that has a cat with a collar show them these photos.  Especially if it's an outdoor cat. If I could have caught Daisy before she bolted and taken her collar off maybe I could have saved her life.  But like they say hindsight is 20/20.

Like I said these photos are graphic but if it will save one cat's life it'll be worth it.

Dave asked the vet to take these photos.  They were taken when she was sedated.  She might look like she's euthanized, but she's not.

Have a Blessed Day.

Things happen for a reason.

I'm on a week's vacation this coming week.  We were supposed to go camping Friday, Saturday and Sunday, but it was giving rain. So we cancelled.  J. was disappointed.

But now we're glad we didn't go.  Because after I was done milking  J. hollers "Daisy's Back!!"

I'm like, huh?  We had given Daisy away to a lady.  She would let Daisy outside and had a collar on her so she wouldn't kill the birds.

About 4 months ago she calls and asked if I'd take Daisy back because they were moving away and couldn't bring her.  So I said yes.

When she brought her over I saw she had a collar on.  The mistake I made I didn't close the barn door before I opened the carrier door and off Daisy flew.  She was always a skittish cat.  The drive here didn't calm her nerves any.

I never got to take her collar off.  We also didn't see Daisy again.

Till today.
That was over 4 months ago!

She had the collar through her arm and it had taken the fur and skin out.  I don't know how long it had been. She is so skinny it's amazing she's still alive.

Since it's Saturday there are no open vets.  Only emergencies.
We called one.  This is the prices.

Another vet had almost the same price list, but he was honest.  He said if it's not bleeding, keep putting peroxide on it. And then give her penicillin till it starts to crust over.  She'll be scarred but she should recover.

The following photos are not pretty.


She was starving and kept eating and eating. She was also very cuddly.  We had a hard time finding a spot to inject the antibiotics since it's intramuscular and she's got no muscle left anywhere.

So I'll keep you all informed on Daisy's progress.  I guess this was the reason we didn't go camping. Because we wouldn't have been home to find her if we would have been gone.

Everything happens for a reason.

Have a Blessed day
Lisa

P.S.  If she survives this, she's coming in the house and never leaving again!

Email ThisBlogThis!Share to TwitterShare to FacebookShare to Pinterest
Labels: Daisy

It's come to an end.   Well the chickens anyway.  After researching online and talking to other people we decided there was only one thing to do with the "mitey" chickens.  Ok, well only one legal one.  Slaughter them all and take down the coop.
What I really wanted to do was burn the coop, but that's slightly against the law here at the moment with the fire index at "extreme". Even with a husband on the fire department.
Plus it's waaayyyy to close to the other barns and the house!
So last week we sent them off to the butcher.  The entire 38 of them!  I sold several to friends and then kept the rest.  Even though they had mites they were still fine to eat.
Then the issue with what to do with the coop.  It's an old, old building and I wanted it gone! It was really an eyesore and rickety.  Dave wasn't into demolishing it too much.
We called several people that do such things, but they want $500!!! To tear down a chicken coop and cart it away! Come on now.
Dave still figured he could clean it up enough to put new chickens in there.  I wasn't so sure about that. Then when the vet came over last week to look at Susie the donkey's foot.  I asked how to get rid of the mites.
His answer.....kill the chickens and burn the barn!
So we were half way there.

Today when I left for work this is what I left behind.... 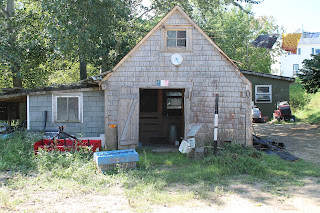 A rickety but serviceable chicken coop/barn. 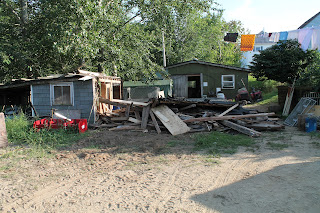 Since Dave can't use his arms too much, he decided to see if he could demolish it with the forks on his tractor.  I guess he succeeded.  He said it just came down like a house of cards.  In other words it was ready to fall down.
Tomorrow someone is coming with a dump truck to cart it away.

We have a cute new "house" for the new pullets.  After the old barn is gone completely and the area sanitized, we will have the new "house" moved to the same spot.  I can't wait! Neither can the pullets since they are pretty crammed in the goat barn. 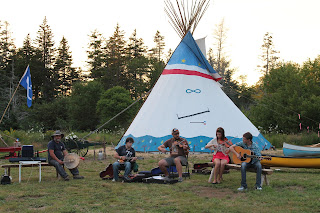 Last week and this week is  the Acadian Festival.  One of the activities is the Métis teepee. Dave and J. went several times.  They had some drumming, food, drum making demos etc....

I guess that just about all Acadians are Métis since our fore fathers would intermarry with the MicMac.  So that means, yours truly with-the-fishbelly white skin is Métis.

Just the thought of that makes me laugh!  I mean...come on...do I look even slightly native? 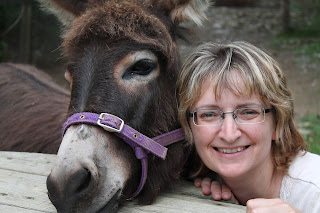 Or French for that matter.  The single drop of Irish blood in me is very prominent.