I have been trying to write this post now for a few weeks, maybe even a month. It's hard for me to admit failure and this post is going to be partly about my failure, but also my sanity.
We've all been rethinking our views on farming. It's getting to be too much. We have no time for anything other than the animals and our fulltime jobs.
One of my favourite pastimes is beach glass hunting. I used to go at least twice a month in the summer. I haven't been in over a year and a half. I'm constantly frazzled, I never have time for J., my garden is over run by weeds and the summer is just started! I could go on and on and on,but I'll stop here.
I'm selling two goats. I don't need Esme and Whisper. J. was upset at first, but then he realizes that it's for the best. He realizes that mommy is just a few straws short of having the proverbial back broken.
I mean honestly, I need one goat, not 4! But you can't just have one because they get lonely. So that's why I'm keeping Febe and Cindi Lou. I'm also going to try having a buck. It's going to save a lot time and money. We got Tommy a few weeks ago. He looks almost identical the Cindi Lou. It must sound like I'm contradicting myself, getting rid of 2 goats and buying another one. But I think I know what I'm doing. (I hope) 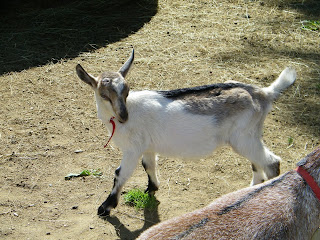 I mean, if I breed all four goats, where on earth am I going to put all the kids for one thing, and all the milk?
But with all that being said, we've been trying to sell them and so far no offers and I mean we are selling them cheap! So it seems I'm going to be stuck with them a bit longer.
Now on to the pigs. Some days Dave just wants to get rid of the whole lot. Of course, like me, he finds it takes way too much time. They take 80% of his time at home, then he also has to take care of his elderly parents 5 minutes away and all the maintenance of the house and farm. But he can't just get rid of them and then just get a few in the spring for meat. We get scraps from the stores and if we give that up for the winter, then we lose it for good. So that means we cannot afford to keep the pigs, because the feed here is way too expensive to keep the pigs. So the veg scraps help alot. So we have to keep them all.
One thing he's done is gotten rid of Wilbur. He was too big and getting too rough with Charlotte. So we sold Wilbur for 250$ and got another breeder for 145$. His name is George (I'll pet it and feed it and love it and call it George. lol) He's tiny at the moment, but it won't take long and he'll be ready to do his business. 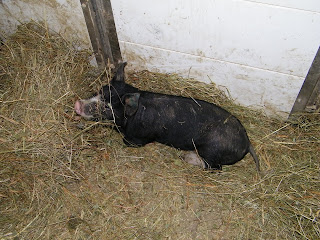 Every once in a while I feel like I'm in the wrong line of business. I so want to stay at home with my family and farm, but it's just no feasible. Some days my heart aches to be at home with my family. I'd love to be able to find some work from home but in this neck of the woods it's next to impossible. We even looked into opening a goat dairy farm, but it would cost at least 50k if not 100k. So that kinda took care of that idea.
Well I should stop this post here. I think I've ranted and raved enough for tonight.
Posted by Lisa at 9:33 PM 4 comments: 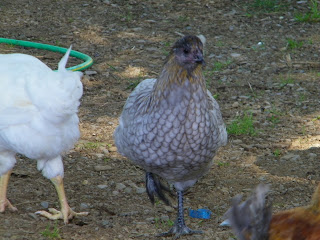 So now I have a new hobby...chicken watching! 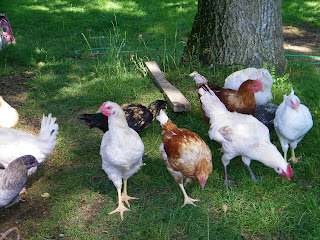 I love watching them. They look so happy now. 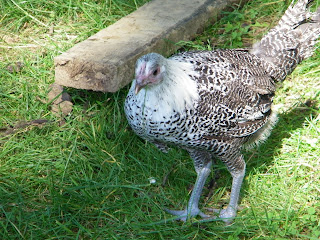 They were just a scratching and pecking and doing chicken things. 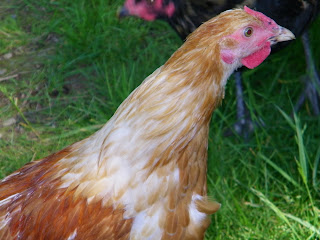 So I took so many pictures of them, you'd think I'm a chicken photographer.
Ahhh....yesssss....my new hobby. It could become addictive.
The only problem was that at 9pm I still had a straggler. So I had to go on chicken round up. 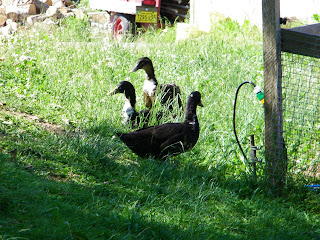 Even the ducks didn't seem to perturbed.
Have a Blessed Evening
Lisa
Posted by Lisa at 9:07 PM 5 comments:

For the last two weeks every morning I say "tonight I'm going to blog", then tonight shows up and I'm too pooped to pop, let alone blog. The last two days I've had a major chest cold. That didn't help matters.
It's been so long I don't know where to begin.
The gardens are all put in and for the most part they are doing well. It's been the driest spring for a long time. We've been in this house now for 18 years and I've never had to water my garden. This year I had to invest in 200 ft of garden hose to water the garden. That's not good. Mind you, two days after I got the hose it rained so hard we thought we had to go dig out the ark! Murphy's Law I guess. If you want rain spend a fortune on garden hoses.
Last year I couldn't grow a carrot to save my life, this year it's greenhouse cucumbers. I planted two that I grew from seed myself and something ate them. So I bought 2 from the garden centre and again something is eating them. I can't see what it is. One of them just died, so I'm giving up. I'm not planting another one. We'll have to do with that lonely plant. The cukes in the garden seem to be doing well, I prefer seeded cukes anyhow. 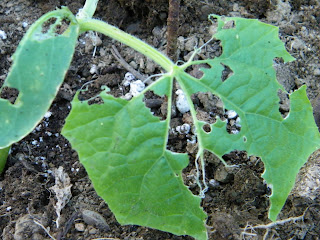 My pumpkin patch. Well...that's another story. Dave cleaned and tilled the old pig pen so I could plant giant pumpkins in it. I grew the plants from seeds. I nurtured the things till they were old and strong enough to go outside. Well guess what!?? The ducks ate the plants!!!!!!!!! I just can't win. So off to the garden centre I went again (well really it's where I work, we have a garden centre there also) I bought 4 plants, planted them and Dave put a fence around the darn thing! So far so good.
If the ducks don't watch themselves, they won't have to worry about the minks getting them. I'll do the deed for them. Heh, heh.... 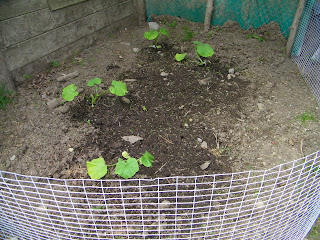 Last week I lost a dozen eggs. I was not impressed. I forgot that one of the hens would lay her eggs in the feeder. I usually check in there everyday. But for some strange reason I wasn't checking, yet I couldn't figure out why the egg production was down. Then one day I remembered and checked the feeder. In there was 12 eggs. I had to throw them away since I had no idea how long they had been there. 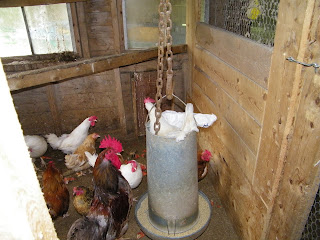 Since then, I think there's more than just her laying in there. I found 2 eggs in there today and I had checked yesterday.
For the most part, when a hen slows in the egg laying department, off she goes to the butcher. But we do have some that will never go to the butcher. Why? I have no idea. One of these is Ginger. I don't even remember where I got her from. I do remember that about 2 years ago the other hens started picking on her. One morning when I checked on her they really had done a job on her. I didn't think she was going to make the day.
I took her out of the pen and the only other place I had to put her was with the guinea hens we had at the time. I didn't know if they'd get along or not. Everyday I checked on them. The guinea hens left her alone and she lived. Now she's at least 5 years old, lays 1-2 green eggs a week, when she's not broody, and makes her home with the other hens again, but doesn't move much from her post in the nest. 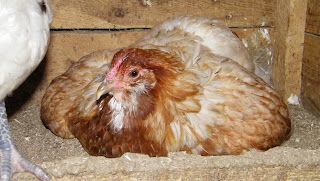 Remember a few blogs ago I tried to make cheese? Well here are the fruits of my labour. I used about 6-7 litres of milk to attain these two measly little chunks of cheese! I do believe that I'm going to try my hand at making soap. 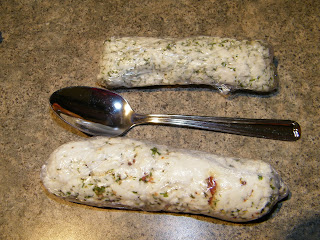 We've been making a few renovations in the house the last few months. When you make renovations yourself, it usually takes alot longer than it would if a pro was doing it. Now don't get me wrong, Red Green a.k.a. Dave is just as good as a pro, but he doesn't do it for a living, so in between delivering propane, cleaning pigs, helping his elderly parents, doing church things and just everyday life things then.......he works on the renos. We are doing some work to our bedroom. For the last several weeks this had been our closet...the living room and the clothes hampers. It's not fun! 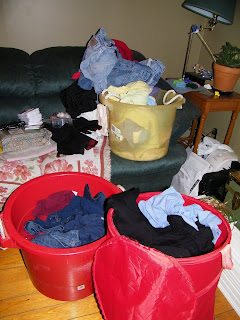 Finally our closet has been finished so things are back to semi normal, but it's not all done yet. A little more drywalling, then painting and putting up doors and casings. I can't wait!
Well I have so much more to blog, but it'll just have to wait till another day.
Good night!
Lisa
p.s. update on the stray cat. We thought it was a female and her name was Duchess, but now that she's alot friendlier and we can hold her, we've discovered that her name is now Duke. If you get my meaning.
Posted by Lisa at 10:05 PM 6 comments:

Houston, we have a problem.

Everything is going well, you tell your friends that things on the farm are happy, content and going along smoothly. Then Murphy's law kicks in.
We were planting two dogwood trees Monday. We were kinda late in planting them, since I bought them LAST YEAR. But anyhoo, I digress. All was going well. We were almost done our last one when J. yells, "Why is Cindi Loo out of the pasture?" Oh bugger! And she was right beside the road. I caught her no problem but we couldn't figure out how she got out. So we put her back in. Not even 30 seconds later, she was out again. She went right through the 7 strands of electric fence, pausing half way, like she was going for a stroll in the meadow.
Dave shoved her back in. We figured either the fence was off or not working. Dave touched it and Nope! it's working. Ouch. So after about 5 escape attempts, well really escape successes, she's in the barn and not coming out until we can figure something out.
This is not good. Here I was telling all my friends that my goats are happy where they are so that's why they don't attempt to escape. Yeahhhhh....riiiiiiight.
Dave figures that maybe since it's been so dry that it's not grounding the goats and they're not getting shocked as much as they should. But then why are the 3 other ones not going through. Wait, just wait and they probably will.
Have a Blessed Evening.
Lisa
Posted by Lisa at 10:12 PM 2 comments: