The stress levels are gone through the roof.

I don't know what to make of it!

So far we've had pretty good luck with kidding time.

This year not so much.

Azelle was due yesterday, but she decided she couldn't wait
any longer and had them Thursday.

She started in mild labour Wednesday and by 8 am Thursday morning she still didn't have them.  I had to go to work and Dave had the early shift that week so he was gone to work at 5:30 am.  I worried and worried till I got to work. So I when I walked in the door. I called my dad to go check on her around noon.
He called me at 11:30 to tell me that there was two kids on the ground..phew! But...(there's always a but) momma wasn't looking too good and was trembling. I know it was chilly that day, but she shouldn't have been trembling.

So I left work early to check on them.
Azelle had cleaned them off a bit, but they were still wet.
She was in the corner like my dad said, laying down and trembling.
I checked her temperature and it was normal. I gave her a bucket of warm water and molasses and she only drank a cup or two.
Then I knew something was drastically wrong. Every doe I've ever had, including Azelle, just downs that bucket of warm, sweet goo after kidding.

I called the vet and left a message. It wasn't long before she called me back at work. (I have great bosses that let me leave for goat emergencies, but I still have to go to work and make money to pay for these goat emergencies!)

I needed to start her on penicillin and newcells.

But later on in the afternoon, she still wasn't well. I also needed to give her 7 extra-strength aspirin. But the vet wasn't keen on me giving her all that in case she had a tear in her uterus, she might bleed to death...not a good scenario.
To make a long story short, Dave called the vet again at supper time and we were ready to drive 2 hours at 7pm to get the meds (what we won't do for our goats!) when Jamie remembered my mom was passing by there as we spoke!
So I called her on the cell phone. She had just passed the vet's 10 minutes ago but she'd turn around for us and go get it! Phew!!!
Thanks mom!

So we started Azelle on more drugs than I care to admit.
By now the little bucklings' ears had fallen. They'd gotten too cold. So now I have an Alpine that looks like a Nubian...shudder.....
I'm working on getting them back up.

Sunday, Azelle is still not doing well and to add to the problems her udder is so tight that I can't even get the milking machine hooked up!
So on our way to church Sunday morning, guess who we meet!!!
THE VET!!!

We call and ask him to stop in. He said he'd be there in two hours.
Phew.

SO! Diagnosis....
Azelle has either a bruised uterus or a tear in her uterus. Also she's got edema in her udder.  Edema is when you have water pockets in the udder. Not good.
We now have drugs for infection, drugs for water retention, drugs for the tear, drugs for the pain and drugs for....oh wait...that's it. It seems everytime I turn around I'm sticking her with a needle somewheres.

Already tonight the edema has gone down a lot, but she's still in pain. And I have to milk her out twice a day, even with the kids on her because she's making too much milk.  She's got enough to supply ten kids.
When I milk her she doesn't move a muscle. I think she knows how well she's going to feel after I'm done.

But other than the fallen ears, the kids are doing great.
We called the buckling Spring Peeper Claude Chaloux, after a friend of ours.
And the girl (which we are keeping) Spring Peeper Caithness Clairee.
Many, many moons ago, like 19 years worth of moons, we went to England and the factory where they make Caithness glass.  I loved the name so I decided to use it on this little cutie. Clairee is from a Steel Magnolias character.

We'll call her Cate for short.

But one thing I've noticed is that Chamoisee must be a recessive gene, because I have a hard time getting another Chamoisee goat!

Maggie is due Thursday and I hope she waits till then. This year she actually looks pregnant. So maybe she'll have two babies, not just one! 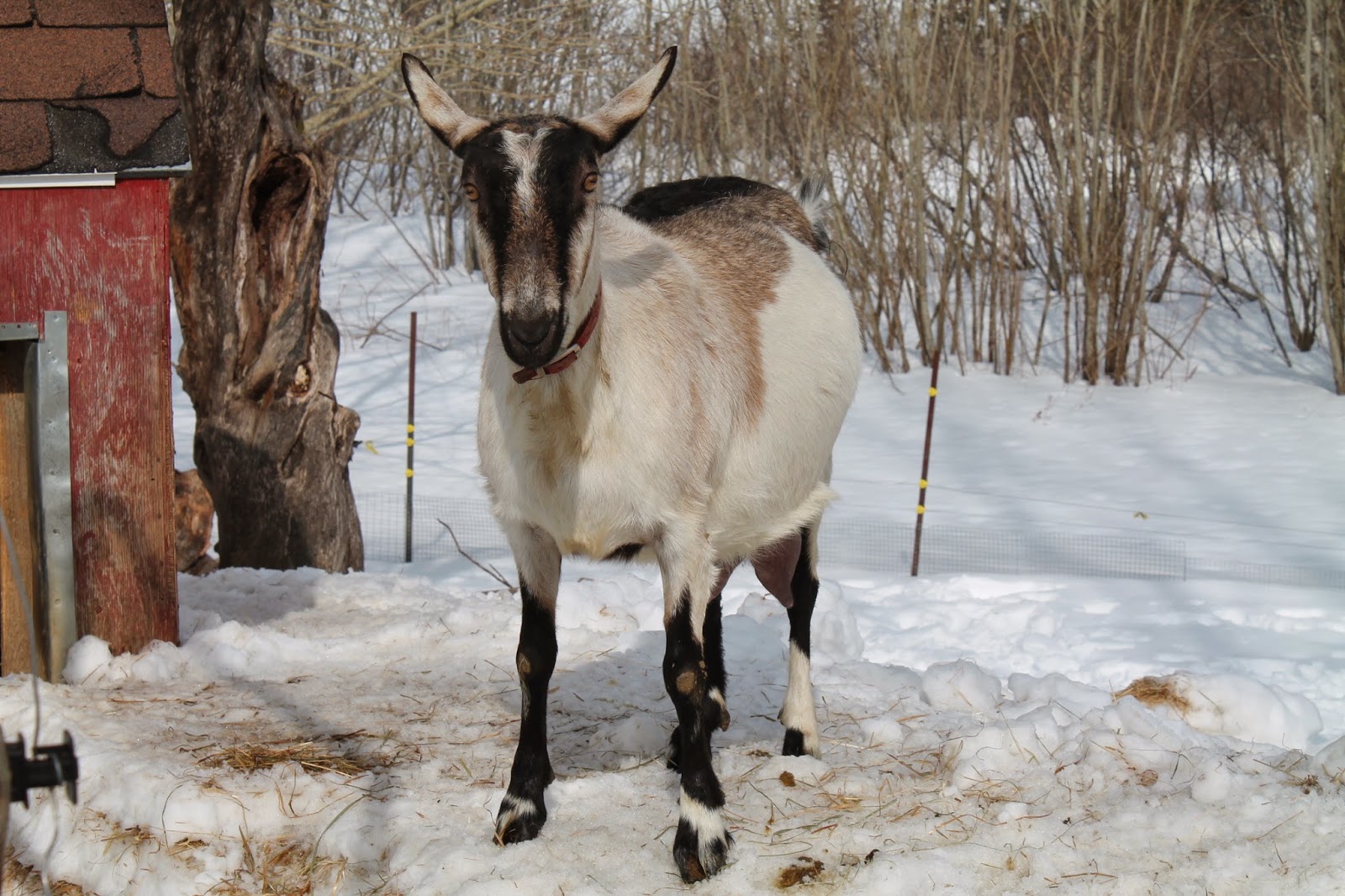 Have a Blessed Evening.
Lisa