Remember last fall we got someone to help us with one raised bed?

Well spring is here and Jamie and I planted in that bed.

So I had to get some more before the real planting season began. 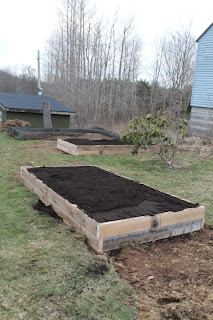 So I commandeered my father to come and help me build them.

I really wanted the entire lawn filled, ( had enough wood for at least 2 more) but I can't afford anymore dirt right now. That stuff is expensive! Phew!

At least mink are good for one thing. Their carcasses make excellent planting soil!

The soil might be rich and fertile, but it's kinda creepy. Look what I keep finding in it. Mink jawbones, pelvic bones, leg bones and ribs. Ick. 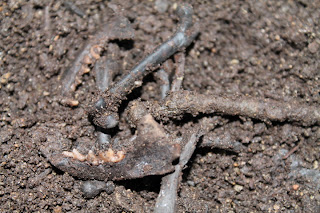 One load filled two beds.  I might have enough for a third bed if it's not too big.

But it had started to rain, so I let me "help" go home.

So my lost lawn is slowly becoming more lost.

Soon I'll have veggies and less gas used to mow the lawn.

It's a win/win situation. Well not completely...Jamie loves moving the lawn.

He's not impressed. But he did love helping me plant in the new bed.

My only issue is that the cats love the beds also, and I don't need the extra manure ( if you know what I mean). Plus the chickens are no help.

So what to do.

Well Dave the hubby might not be able to use his brawn at the moment, but he's still using his brain. Here was his idea...

Jamie's old trampoline is just sitting there rotting away, so I took the netting off the darn thing and put it on the bed that was planted. It's got enough holes in it to let sun and rain go through, but annoying enough so the cats and chickens will leave it alone! Muahahahahaha!

I also have enough for two beds. It's also black so it'll retain the heat.

Necessity is the mother of invention! 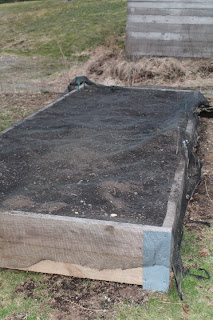 Have a Blessed evening
Lisa

Methinks I should pay more attention to my house plants! This plant was doing wonderfully but I would water it and the next day it would be bone dry! I couldn't figure out why, till I decided to re-pot it yesterday.

Mmmmm...ya think she was root-bound?

I could just hear the sigh of relief when I put her in her new home.

But I have a question for all of you...where did all the dirt go?
The pot was full of dirt and a little bit of roots a few years ago, so where the dirt magically disappear to? Hmmm? 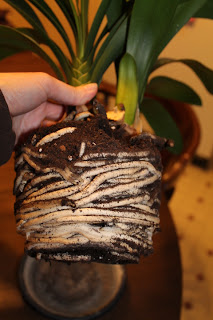 Behind the local university the summer students have built paths through the woods and along the beach. It's really beautiful. They've name sections of it after the Canadian Provinces. We call the entire area
Les P'tits Bois, The little woods.

They have feeders for the birds everywhere where people put bird seed and come to watch them eat.

So needless to say, with all those people coming through for leisurely walks, the squirrels and birds have gotten pretty tame.

If you bring seeds and go slowly, they will eat out of your hand.

So my parents, Jamie and I decided to give it a go last weekend.

We loved it! I also got excellent shots. 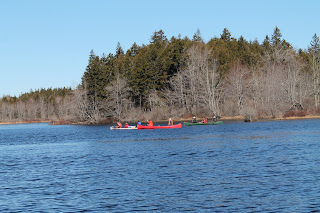 I cannot believe how fast time flies. It's been so long since I blogged last. So many things have been going on. Some good, some bad.

There has been one major thing that I would love to blog about, but I can't. I know if I could get it off my chest I would feel so much better, but for now this part of our private lives must remain private.
Maybe in a few months or so I'll be able to share the hardship we have been going through.

Right now I just ask for prayers....and lots of them.

Because of this issue it's really the only thing on my mind and I know I have to trust that God will take care of us, but like a  friend and fellow Christian once said, "Is anxiety a sin or a sickness?"
She suffers from anxiety and I, myself, the older I get, the more I suffer from anxiety. I have good days and bad days. I'll call Dave from work and I'll say, "I'm having a bad mental day."  So am I suffering from a sickness or sin? I could debate this till the goats come home. But I won't.

It doesn't help that my mind doesn't stop running. It's not just the usual woman thing. I honestly believe that I've got Adult ADD. But that's another post.

So let me bring ya'll up to speed on what's been going on in our lives that I CAN share with you.

This past Easter weekend was filled with sorrow and excruciating happiness! (does that make sense?)

Good Friday didn't start off all that well.

If you remember the two cats we had rescued Slate and Pico.  Well Slate got run over that morning. I found him when I brought Emilie out for her walk. I ran in the house bawling and then Jamie was bawling. So we had a funeral.

Even though Slate and Pico didn't like it in the house which is why they were outside, we brought Pico in the house. He's under house arrest for the foreseeable future.  Mind you he doesn't seem to mind the inside now.

After we had calmed down a bit we went to watch the annual canoe trip.

This canoe trip is a two day event. Every year on Good Friday, thousands of people and their canoes  or ATVs (to follow the canoe trip) show up between 7 am - 10 am at a certain place.

The amazing thing about this event is that it's been going on EVERY year since 1972 AND  it's not organized by anybody. It's not a canoe group, organization etc... that takes care of it.

It's just that every year, it just happens. People come from all over.

It's like someone said, "la Clare Canoe Trip held each year on Easter Weekend since 1972! Nobody organizes it, starts on time, 1000s participate! Incredible really!"

Here's a few pictures I took , really the pictures don't do it justice.

Later that day we went geocaching with my mom. We were looking for one of the caches when Jamie yells ,"SNAKE!" we're like ya, right. You don't find snakes in March in Nova Scotia.
Well I guess we have global warming to thank for this! 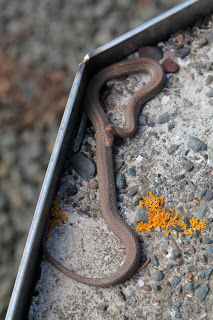 It wasn't big, but it was there. Thank goodness I'm not afraid of snakes...my mother on the other hand.....

Sunday was Easter and it was one of the best days of our lives...Jamie gave his heart to Jesus! We were so excited!  He's been talking about it now for weeks. Then he made the decision. I'm glad he didn't take this lightly. He's serious about it.

I've been taking care of a friend's orchids for the winter. I started with three orchids.  I killed one. (yes, he knows), but I actually got one to bloom!

I know, I know...I'm a sucker for punishment.  Last year I put some eggs to set in the incubator...TWICE! and I got squat.  I said that was the end of my incubator days.  Well I'm giving it another go. 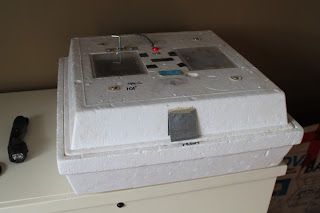 I've also started tomatoes and pumpkins from seeds.  Well I stuck them in the dirt anyway. Whether they'll germinate or not...well that's another story. 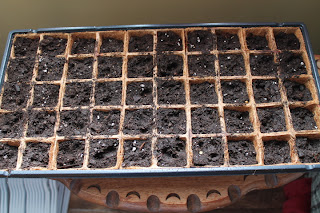 It was such a beautiful weekend weather wise that we let all the goats out.

But we think Maggie and the kids got into something that isn't agreeing with them.

Maggie's stomachs stopped working. The vet was over today.
She's got a fever, diarrhea, won't eat and just moping around. Not a good thing for a lactating goat.

The funny thing is that according to goats glycol and kaopectate is akin to fried kaka is to humans. Not very good.  But Maggie is like her mama, Febe, when it comes to taste buds. She loves nasty tasting medicine.
This is how the conversation went between Dave and the vet.

Vet:  The goats don't like glycol and Kaopectate. You're going to have to force it in her.

Vet: What?! That goat is really sick!

So he also gave her intravenous. But that didn't work well. She still wasn't eating.

So by the time I got home she needed some more glycol and Kao.  So I gave it to her. Sure enough she wanted it so bad she was eating the large syringe I had the meds in.

Then I try and give her kid some Kao well wouldn't you know it!....Maggie comes at me and bites my finger and actually draws blood! I was bleeding like a stuck pig!  Who would have thought a goat would try and bite your finger off!? But my fingers were full of kaopectate!

Hopefully they'll all get better and life can go on like normal...whatever that is.

Have a Blessed Day!


p.s. Try as I might I cannot get my blog to look nice. I've lost my title and I can't get stuff where I want it. It's driving me nuts. So bear with me.  I don't know when I'll have more time to spend on trying to fix the issue. Hopefully Blogger will fix it. yea, right.

So just enjoy the lovely photos and written content. LD