I'm not so sure how much more I can handle.
This year has been the year from hell for farming.
It's years like this that make you want to give up.
And it's only March! I hope that it gets better instead of worse.

First it started with Woody. The vet had to come twice which is never a good thing.
Money, money, money...
Even after a few weeks Woody was still sick and not getting any better.
I finally thought...kill or cure.
I cut Woody off from his milk and his feed. Only water and hay.
It worked.
Thank Goodness!

Then we had another calf that the dairy had given us because it looked like Woody wasn't going to make it for a while. That one was doing well. Then almost overnight it went from healthy to dead.

The two weeks ago Murphy got sick. He got into too much grain. This was on Friday night. I called the vet and she told me what to do and we made an appointment for Monday morning. (Why do all these things happen on Weekends!) But by late Sunday afternoon he was not well. Not well at all.

So she fixed him up and he was good as new.

We only got home at midnight. But anything for our baby.

Then the ring and pignion gear on Dave's tractor went.

We did have good luck with the chicks hatching. We had 21.

We hatch them in our bedroom closet and bring them to the barn in a makeshift brooder when they're dry. Our last one hatched yesterday and when Dave brought it to the barn he noticed Murphy motionless, with his eyes open, on the floor!

He ran to him and picked him up. He was cold and stiff as a board.
He thought he was dead, but he wasn't. Almost.

He called the vet and then called me at work in a panic. (Not that I blame him, I would've been freaking out also!)

So off to the vet we went again.

We had him in a box covered in blankets trying to warm him up.

A few times I thought he wasn't going to make it.
He would grind his teeth and cry.

Then he stopped crying and grinding.

I was sure he was gone.

But somehow we made it to the vet with him still breathing...barely.

The vet gave him a shot of epinephrine to get his heart pumping again.
Then filled him full of glucose and warm liquids. Took blood for some tests and also gave him some painkillers and a shot of steroids.

When he was stabilized she ran the blood tests.

But they came back inconclusive.

He started coming around and seemed okay considering what he had gone through.

But Dave noticed that he seemed to have slow reflexes on the left side.

The vet called for a second opinion and they concluded that he had head trauma or a stroke.

We were just about to decide on the course of action, when his heart rate started to go down.

This was not looking good. He didn't have a good prognosis.

It was time to decide.

They escorted us into a room to talk and think about what to do.
And to cuddle him a bit longer. 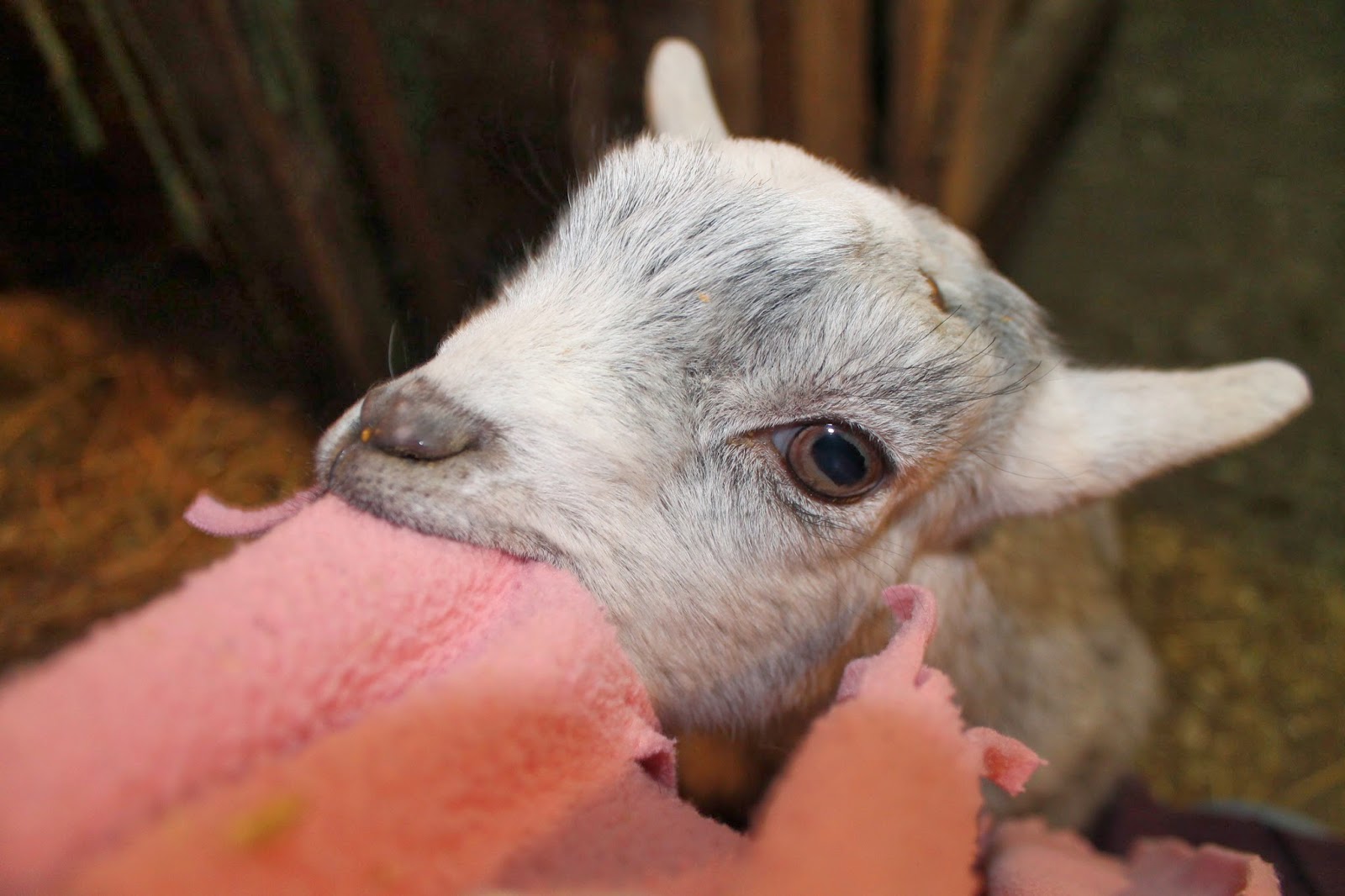 Murphy is in goat heaven now.

I'll never know if we did the right decision or not, we'll never know exactly what happened either,
but this way his suffering is over.
Ours has just begun.
We miss him horribly. I'm having a hard time writing this without crying. 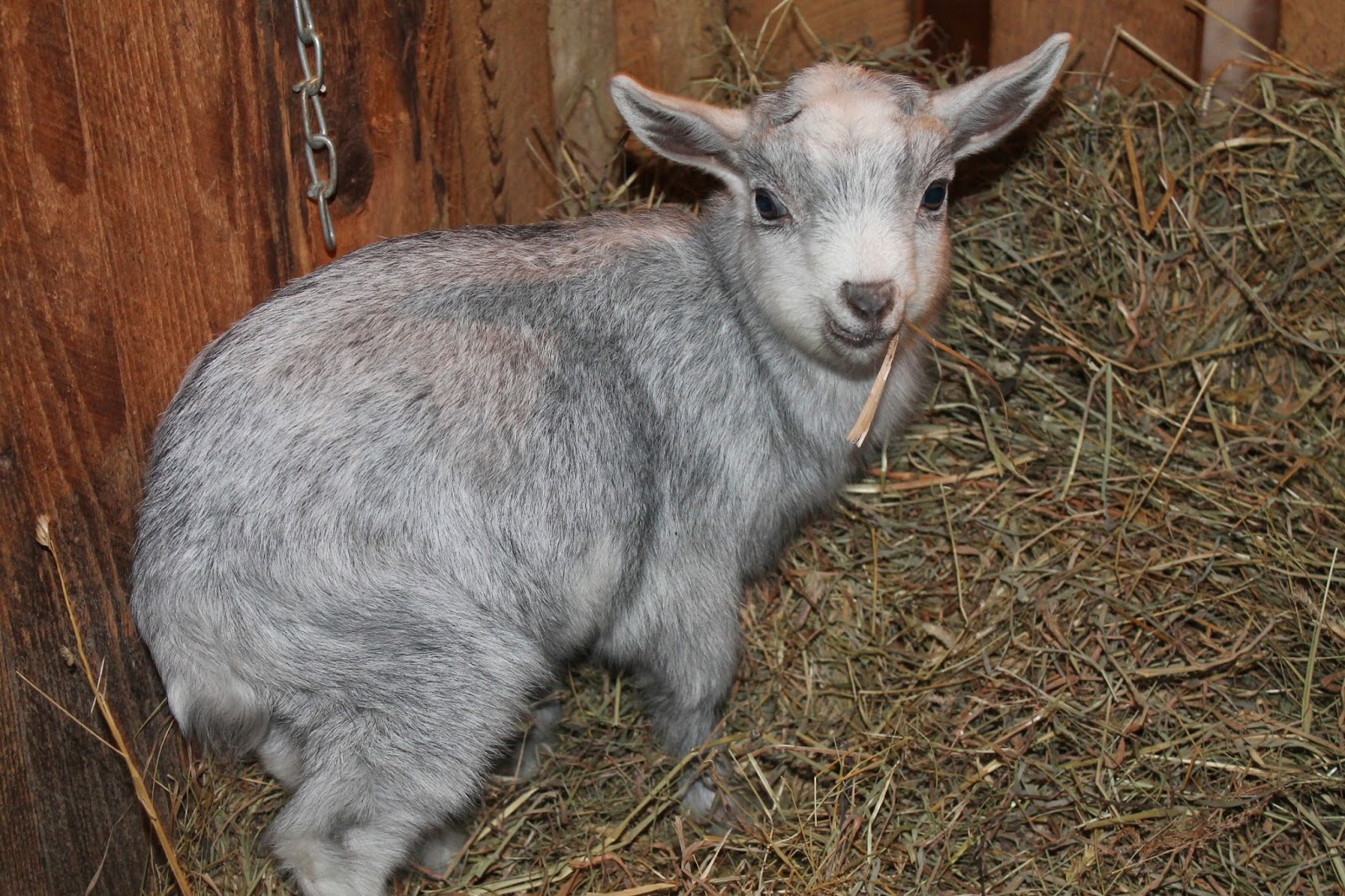 We'll have to wait till spring before we can bury him and we'll erect a small monument in his honour.
He really touched a lot of people in his short little life.
Like Dave said, he was our little buddy. 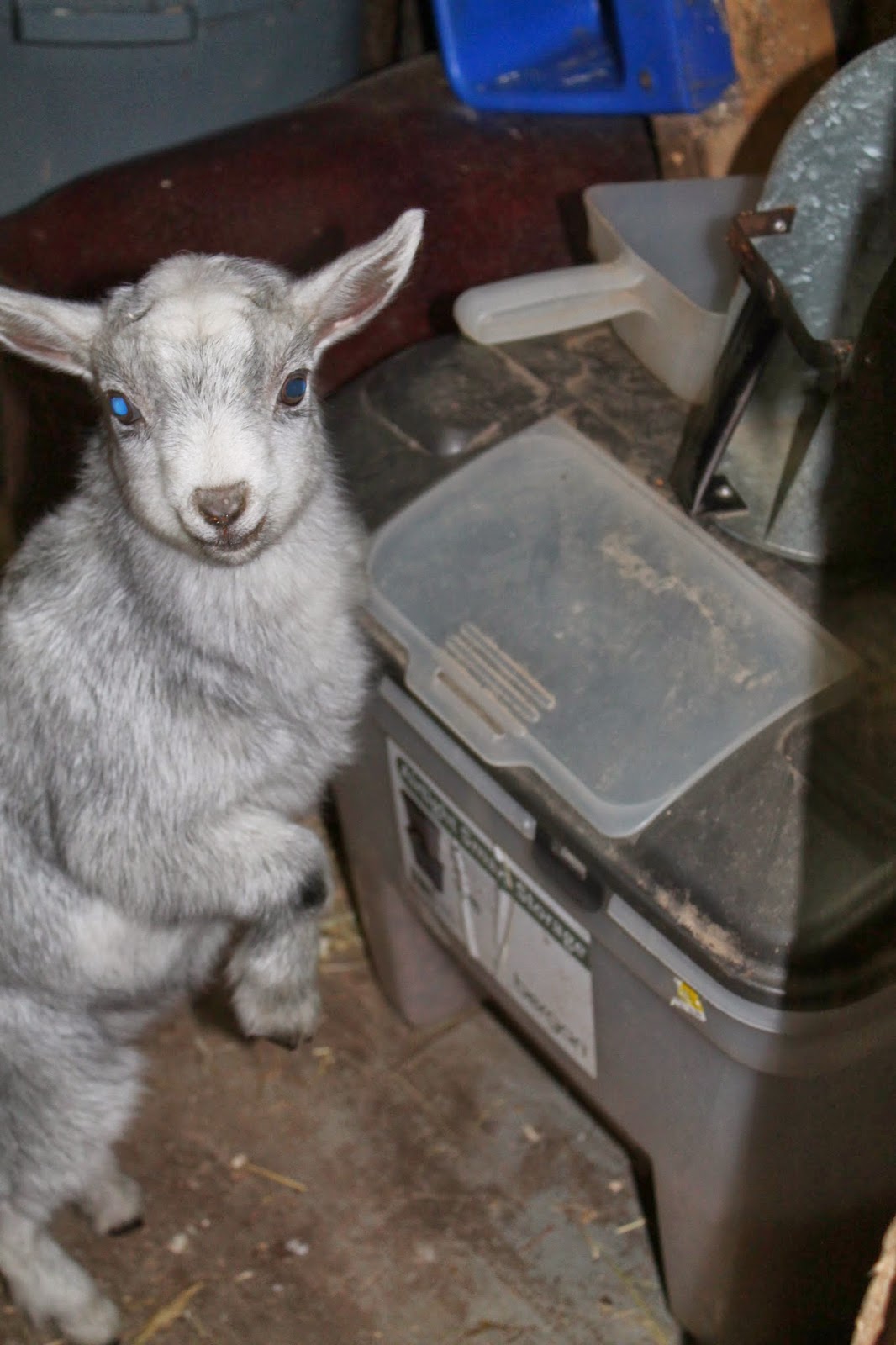 I have not been in a liquor store in 10 years.

But a few days ago I HAD to go in the liquor store.

I found a recipe online for vanilla extract.

I have vanilla beans coming out of the ying yang, I thought I'd try my hand at making homemade vanilla extract.

But the main ingredient was alcohol. Not rubbing alcohol, but the good ole fashioned
drinking kind of alcohol.

For those of you that are new to my blog, my family and I are Wesleyans.
So that means that we abstain from partaking in alcoholic beverages.

So she asked if I needed help, thank goodness!

She showed me the various sizes and types of vodka.
My goodness! There's a whole bunch of different kinds now!

So I stuck to ole faithful (what I used to get when I did partake!)
Absolut!

I just got a small bottle. Not the tiny little ones, but the next one up. 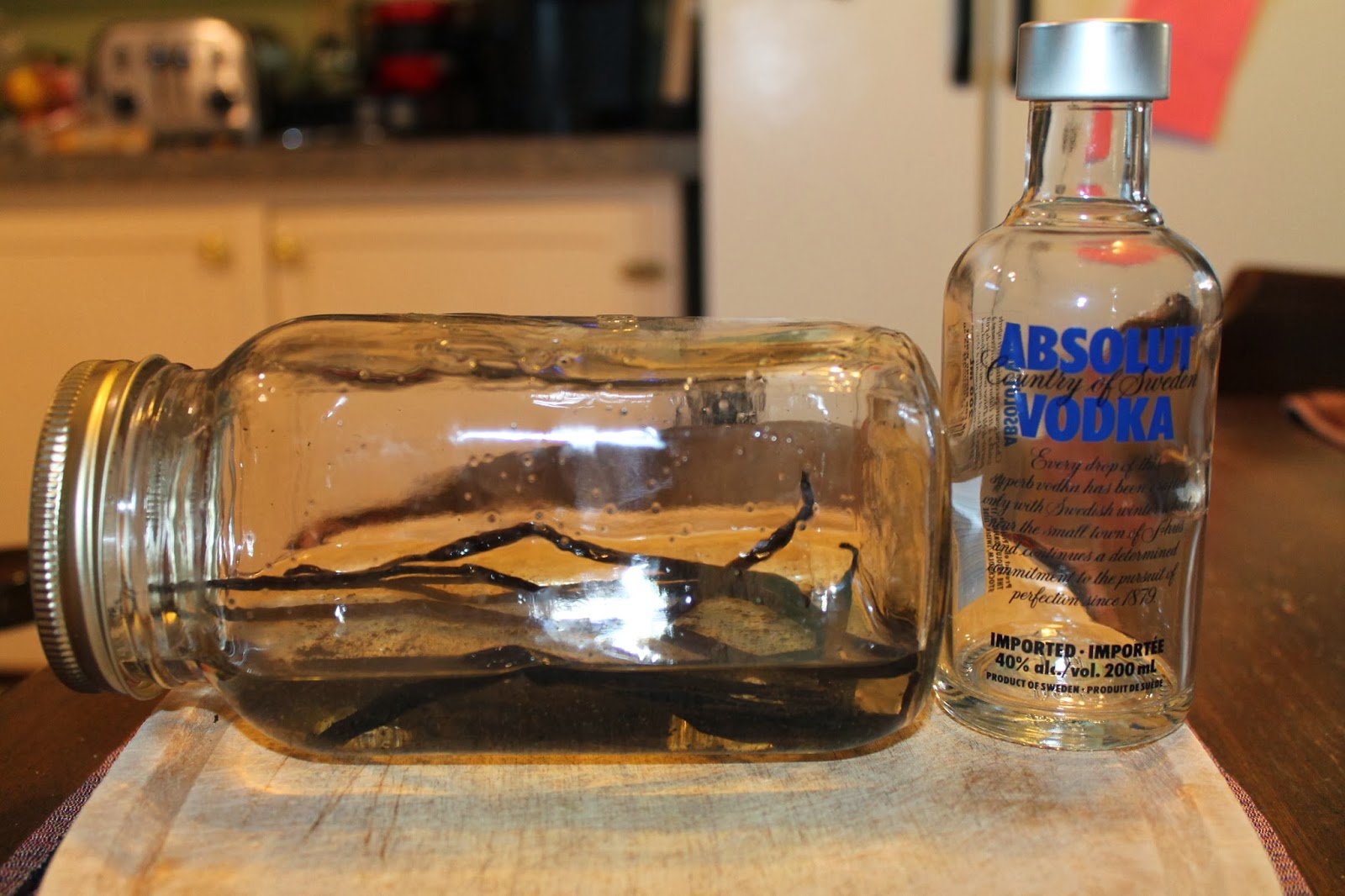 So from what I gather, this is the recipe to make vanilla extract.

Take 5 vanilla beans and cut length wise.
Put in one cup of vodka or another alcohol of choice.
Shake and let sit for 8 weeks or so.
Shake every week.

VOILA! Vanilla Extract! I'll let you know how it tastes in 8 weeks.

I saved the vodka bottle so I can transfer the vanilla back to it, when it's done.
Just to freak people out! Hee hee

Have a Blessed Day.
Lisa

I betch'a can't get just one!

Ok, it all started with one of our goat friends and disbudding customer, Cindy.

First we bartered Peeper from her.

Then she came down with three minis to get disbudding as a part of our deal.

How on God's green earth could you resist this! 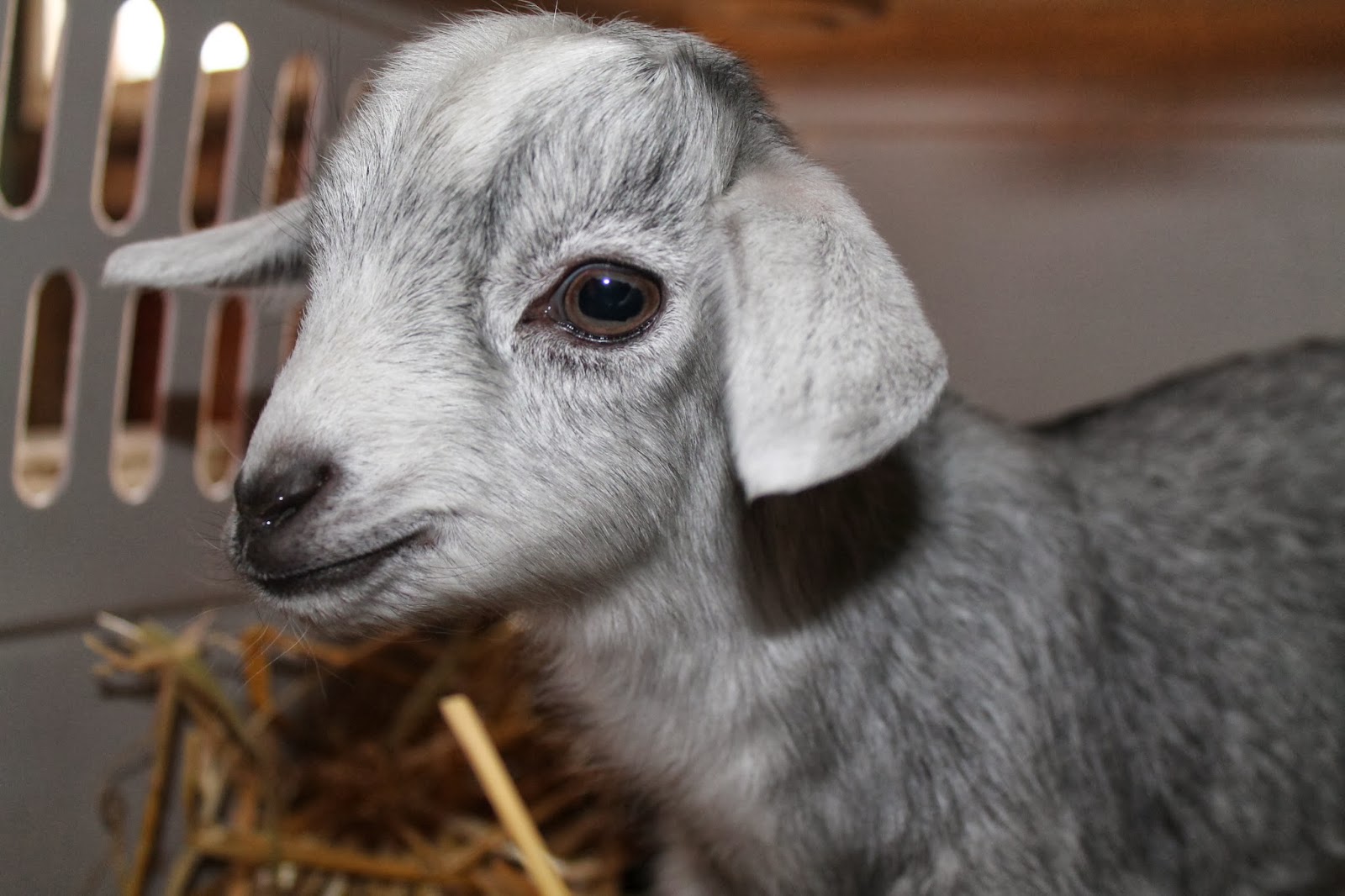 He stayed behind and we're bottle feeding him. 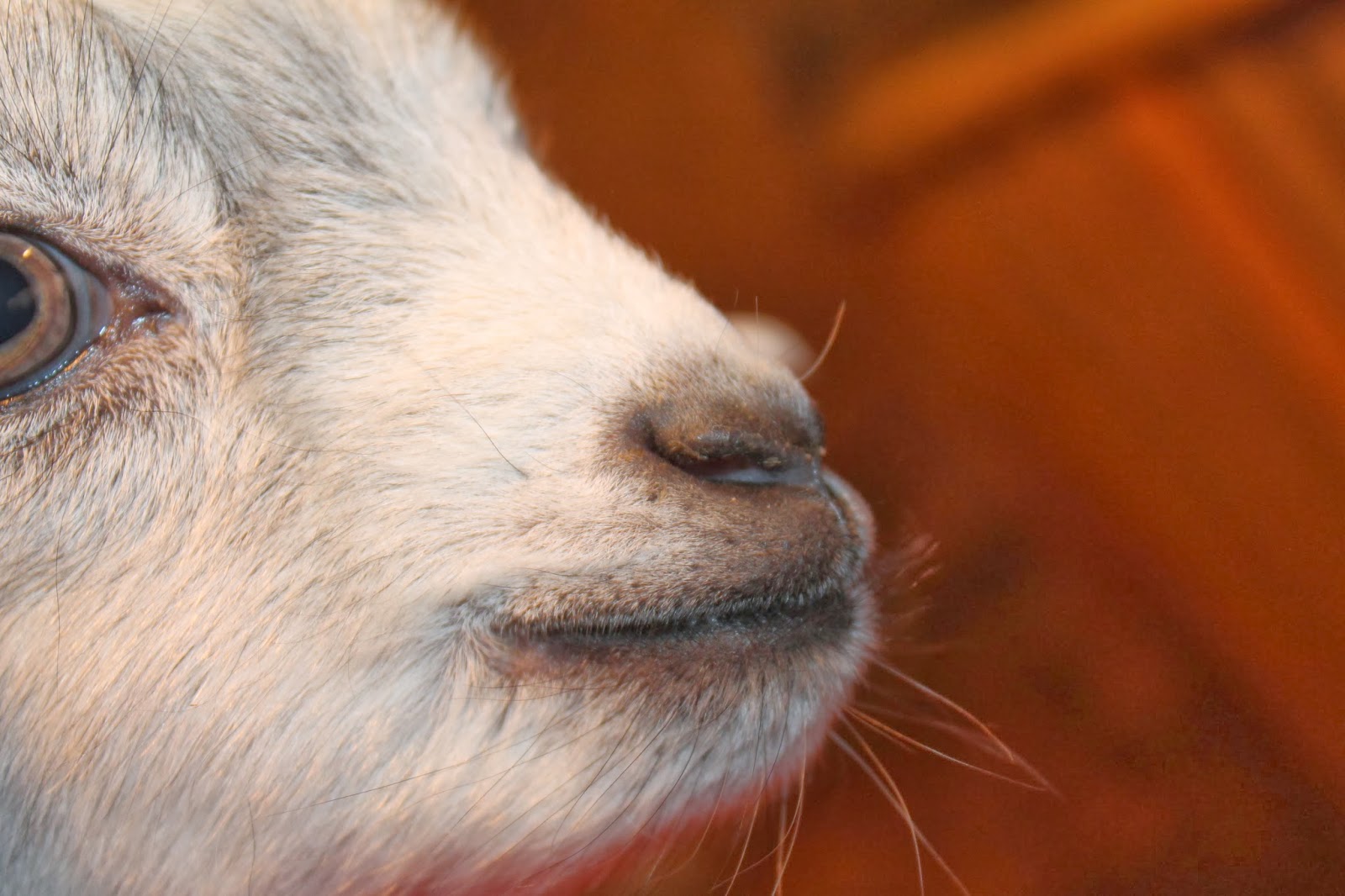 Look at that nose! 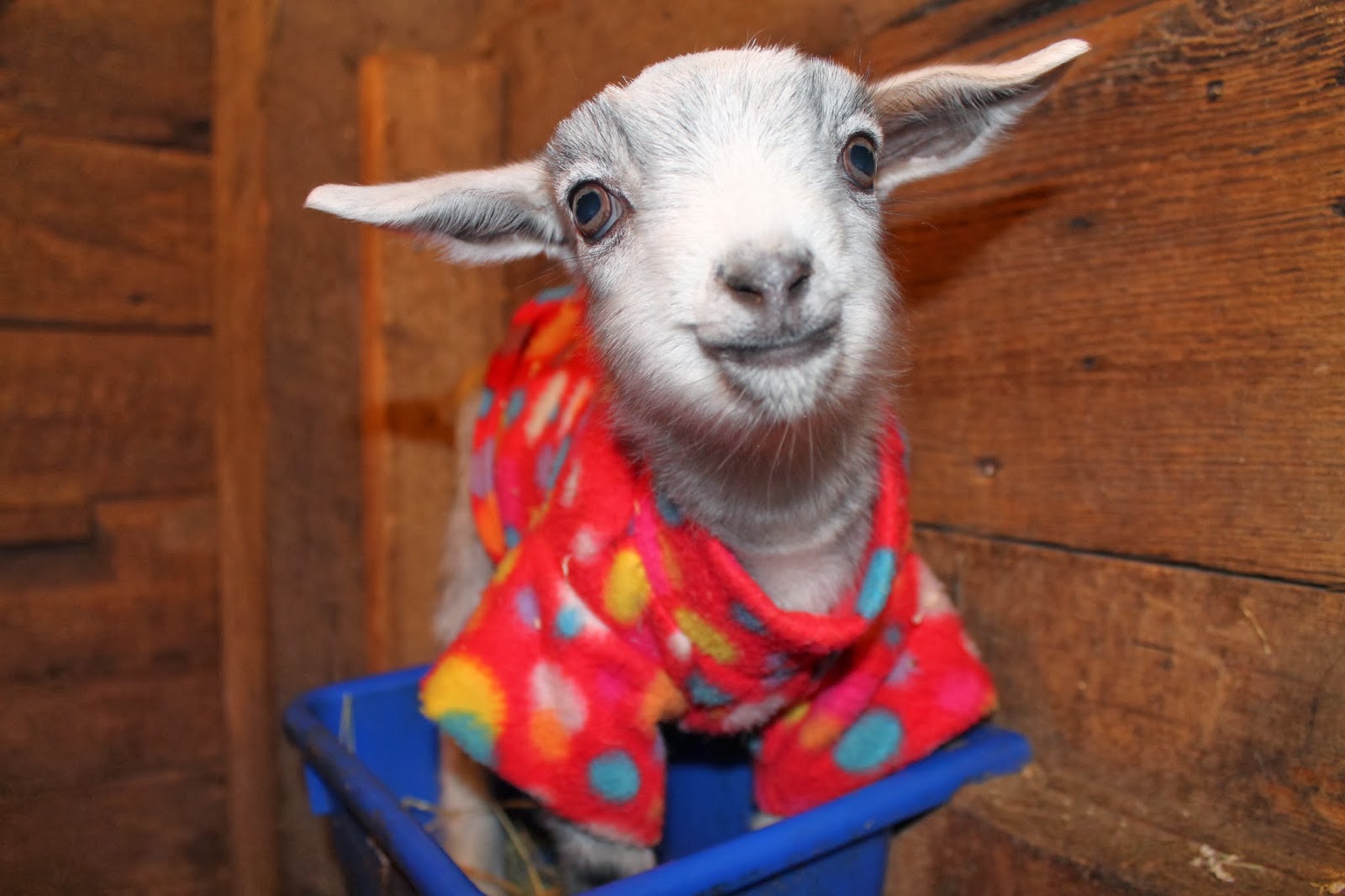 Now what's this little one's name you may ask?

Well a lot of thought went into his name.

He needs a special one.

I found that looked so much like a donkey.

So we named him after Murphy, but since Jamie is so much into hunting these days, he wanted Cabelas or Winchester. At first I'm like ahhh....no.

But then the more I looked at him and the more I found his colouring was like Winchester Cathedral in England, where we had visited many, many moons ago.

So his name is Murphy Winchester III.

Why the third? Why not.

So far Murphy Winchester III is still a he, but in a week or so, he'll be going through the process of becoming a eunuch.

So the vet had to come over for Woody again. It looked like he wasn't going to make it.

He had a turn for the worse. So while the vet was there I asked how much should I be feeding this tiny little thing.

He quickly did the math in his head and said, "About 2 cups of milk."

"How much have you been feeding him?"

"No wonder! He's not hungry! Tone it down to 3 cups a day or he'll turn into goatzilla."

So Murphy Winchester III is down to 3 cups a day. And if you're late for a feeding by even just a few minutes,  he does turn into goatzilla.

So just an update on Woody.  Before the vet got there, we were sure we were going to have a cow funeral.

Then the vet showed up.

The healthiest calf around! They're just like kids. They'll make liars out of you every time!

The vet said he did have a fever and gave us stronger meds.

But since he was supposedly on death's door that afternoon, Dave called the dairy and put our name for another calf. They said they had one that was a week old, his legs weren't the greatest, but they were getting better. He was walking on his wrists? I guess that's what you'd call them. But they said they usually heal up well. They just didn't want to sell it to anyone. So Dave said that he'd take it.

Dave kept saying I have a feeling that if we don't take it, it won't be good for the calf..if you know what I mean. So we gotta take it.

So Dave went and got the calf, (the price was right, they gave him to us)which is named Cabelas.

And Woody is doing wonderfully!

Have A Blessed Day!
Lisa