Please bear with me.  I'm trying new things on the blog but now I've lost my title and I can't find it again.
Posted by Lisa at 6:40 AM 1 comment:

Look at this face.

This photo was taken a while ago, but it hasn't changed much. 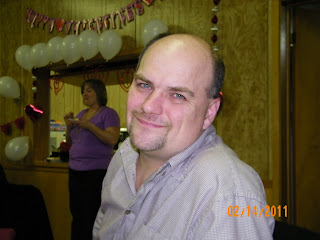 This face is guilty of actually listening to me and doing what I told it to do!!!

Men are not supposed to do that!

What did this face and the body attached to it do you might ask?

HE THREW AWAY THE VESEY SEEDS CATALOGUE WHEN IT CAME IN THE MAIL!!!!!

He even showed it to me before he biffed it in the furnace.

Yes I know I told him to do that when the seed catalogue came in.
But I didn't MEAN it!

That's all I'm going to say about that.

I know, I'm weird.  I'm one of those people that will hate a certain food for the longest time or just eat my food a certain way and I will NOT divert from it.  Like...I don't let my food touch.

Another quirk is that YOU DO NOT DUNK ANYTHING IN LIQUIDS!!! You must keep the cookie, biscuit etc...crisp, not soggy.  It's almost sacrilegious to do otherwise.  Kinda like cereal. You leave the milk pouring to the last minute.

One day I decided that maybe, just maybe...these strange hard-as-a-rock cookies would be okay to try. Well guess what!!! I loved them!! I even dunked them in my coffee!!! Whoa.

So anyhoo...I've found an excellent recipe for some.  It's also very easy to make.  I was impressed.  I was going to blog about them yesterday but I figured that I should maybe try them first.
So today I tried them out at my break.  Well I must say...they were delish! Sogginess and all!
So here's the recipe.

On floured surface divide batter in half into a log approx 14 inches long and 1.5 inches thick. 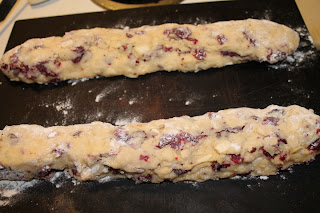 Place on cookie sheet (It doesn't say greased or not, but I say greased) and bake 30 minutes or until firm. 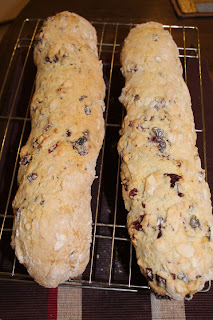 When you can handle the biscotti cut into 1/2 " slices. 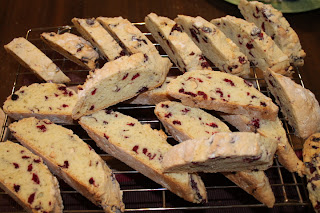 Reduce oven to 300 degree.  Place cut and cooled biscotti on cookie sheet and bake for an additional 20 minutes.
Let cool and store in a loosely covered container. 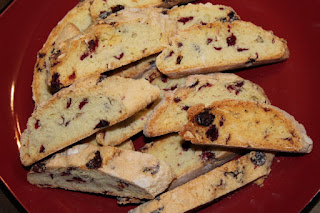 Voilá!!! And there you have biscotti!
Hmmm...maybe I should change this to a recipe blog.
On another completely different subject...I'm going to have to add an encrytpo thingie since I've been getting an extreme amount of spam.
I really hate those things, but I hope it's not going to stop everyone from commenting.

I found this recipe and it's delish!!!  I actually cut up Italian sausages and put them in. Like a sausage McMuffin!  That was really good!! 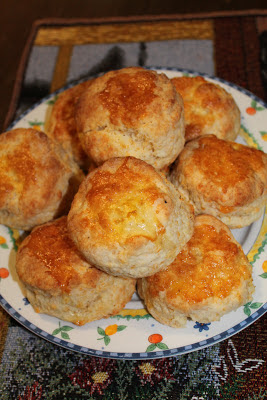 Preheat oven to 400 degree F
Combine first 6 ingredients in Stand mixer (or as I call it my Martha Stewart Mixer)
and blend.  Add butter and cut in using off and on turns until fine meal forms.  Mix in cheese.

Mix enough buttermilk in to flour miturre to bind dough together.  (For me it didn't take the whole cup)
Turn out onto floured surface and knead gently until combined. (about 10 turns.)
Pat dough to 3/4 inch thick. Using a 3" diameter cutter cut out biscuits.
Transfer biscuits to ungreased cookie sheet. Brush with egg wash. Bake until golden brown and firm to touch. About 18 minutes.  Serve warm.

I just happen to to sharp cheddar cheese but usually I just have marble, so next time I'll be trying with marble.  I think it will still be good.  I mean...come on...think about it...cheese and biscuits, it can't be bad.

Have a blessed day.
Lisa

Ok, sometimes you wonder how you get into these predicaments. How on earth did I end up with 6! Count 'em...SIX barn cats!!!

Some people have called me cruel because I have barn cats.  They say that barn cats are abused.  I ask you...do these cats look abused to you?

If these cats weren't living here in my barn they would have no food, no fresh water, no warm barn with a large bed of hay and no cuddles from an 11 year old cat whisperer (and his parents!).

So let me proceed to introduce to you the resident barn cats. 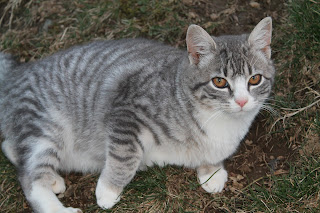 Antonio came to us last year.  His mother was a stray that had her babies at my friend Floreen's house. But she already had too many cats, so we adopted Antonio.  Antonio loves to drop at your feet and roll on his back. But the minute you try to catch him...he's gone!  I can hold him but Dave can't.
He's a sweetie. He got into a scuffle a month ago and his mouth and nose was full of pus. So we medicated him and after a few days he was good as new. 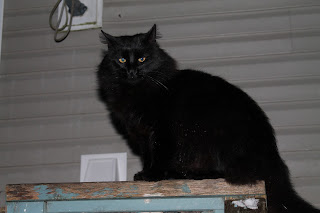 This is Duke. He's our original stray cat.  We didn't adopt him...he adopted us.  Well after many cat treats, J. the cat whisperer tamed him.  He's been with us for awhile.  He was originally a she.  Well that's what we thought anyway. We had named her Duchess. Then we got close enough to realize she was a Duke.
Duke is a vagabond.  He'll leave for a month or so and when we think that we've seen the last of him (a.k.a. coyote lunch) he shows up.  This time he's shown up prettier and fatter than ever.  He is one HUGE cat!  All muscle.  He's not the cuddliest cat around, but he will let you hold him for a few minutes. 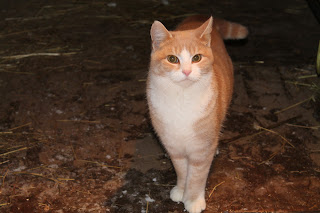 This is Garfield (yeah, I know we aren't to original in our names).  Garfield has been here for a few months. Our friend Katie, had someone dump him on her doorstep.  She's a vet and since she's a vet, people take in upon themselves to drop animals off at her house. But like most people she's got enough animals and has no barn so she can't take anymore! So she asked if we would take Garfield.
He's friendly, but he's not to keen on being held and it doesn't help that he's double pawed, front and back. Ouch! 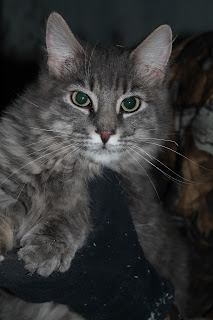 You guys have already met Slate and Pico.  They were meant to be house cats, but they hated it inside.  They were also going to take my house apart.  So they go in and out.  They prefer out. 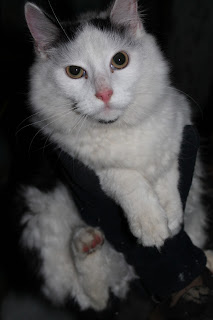 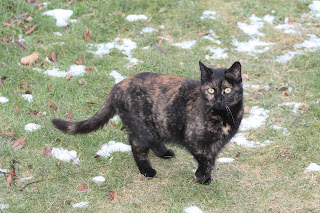 This is our latest addition. This is Moustaché.  She adopted us also.  We have no idea where she's from. And yes...it's a she!  We caught her one day and found out she was a she. She's also tiny.  We are hoping she's a neutered she.  But like Katie told us, it's almost impossible to tell by looking at a female cat if it's been fixed or not.  So we are hoping she was.  So far ( with many unneutered males around) she doesn't look pregnant.  But I guess if she is, we will try and find homes for her babies.
She's not too friendly yet.  But we're working on her.

There's also Sylvester and Junior.  They show up every once in a while.  So technically we have 8 cats outside and two inside.

I think I'm going to put a can at the end of the driveway that says,
"PLEASE LEAVE YOUR CHANGE HERE! IT WILL HELP FEED OUR CATS. OR DROP OFF CAT FOOD ON THE DOOR STEP! THANK YOU."
What do you guys think! Should I?

I honestly think that the cats talk to each other and say, "hey man, I know of this perfect place for you to crash, free food,free fresh goat's milk, free lodging, free cuddles, free dental and medical! Come on over!"
I'm sure that's what they say.
At the moment we are going through a large bag ( 8kg) of cat food a week just for the outdoor cats.  The donkeys and goats don't eat that much!

Oh well, as much as I complain about them, we love them all.  We stop and cuddle them all every time we go outside.  I mean look at their faces...what isn't there to love!
But I can't leave without posting about our two house cats. 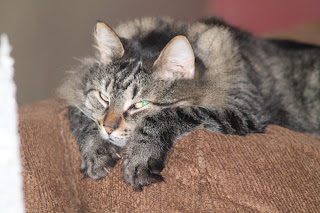 Binoo is 7 years old. She's been with us the longest.  Dave keeps saying he's just going to have her stuffed since she doesn't move much! 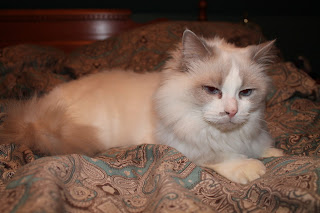 And our beloved Poutine.  She's come a long way. We can actually cuddle her now.  And she's almost 12 lbs.  Ragdoll females should be about 15 lbs.  When we first got her she was 8 lbs.

So here is the latest tale of 10 kitties.  Hope you liked it.

I haven't been to Frenchy's in forever and it's going to be a long time before I go again because hubby is still sick off work, so we are trying to save every penny we can.

But I figured you guys are all hungry for more Frenchy finds, so I found some old finds.

This was a nice bowl I found. Underneath it says made in Japan.
I just found it was really cute.
I did have it full of candies on my table, but then I'm not sure about the lead content so I'm now using it to burn my scented candles.  It works well.

I think I did well for a buck! What do you think? 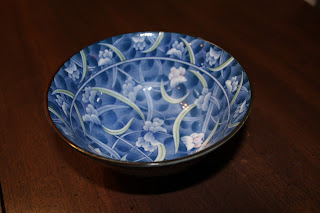 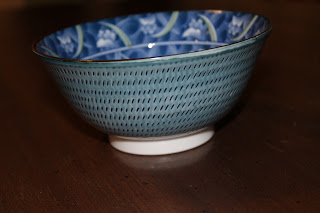 Oh and I almost forgot to tell everyone about the Biggest Loser contest we had several months ago.  We didn't win.  But Dave lost 30 lbs and I lost 16 lbs. So that was good.  I'm still working on losing some more. I only gained back 2 lbs during the Christmas season which really isn't bad.

Really I don't feel any better physically, but I do feel better about myself and that alone is worth a million bucks!