This summer I promised that we'd visit small, hidden places in Nova Scotia.

So a few weeks ago Dave and I, along with our friends Rosemary and Paul,
set out to see the elusive "Drowned Forest".
Dave and I had been there before....at high tide.
We didn't realize you could only see it at low tide.

So I said to Dave that this year we were going again....
at low tide.

The Drowned Forest or Petrified Forest is located at
The Hawk.
Ya and even the name sounds cool. 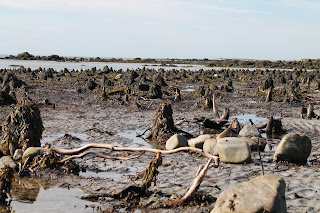 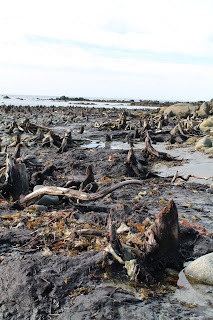 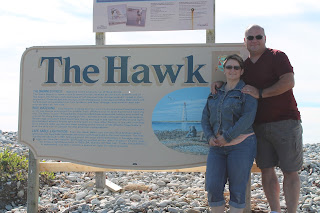 Then today I read an article. Something even stranger than the Drowned Forest.

Is it the forest?

I took these pictures thinking they were part of the forest
but are they..... 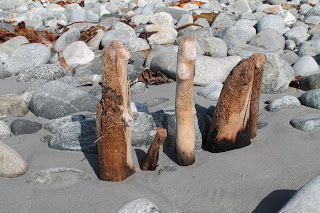 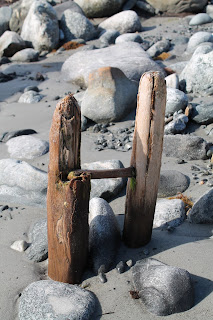 From the article it seems that these are not part of the forest.

After our visit to the forest we headed to something even creepier... 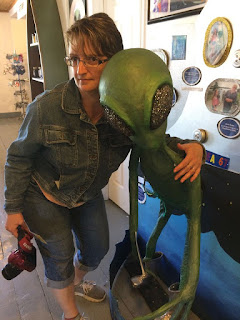 Can you see the resemblance?
This all happened on October 4, 1967.
A few months after I was born.
Were they coming to get me? Am I one of them? 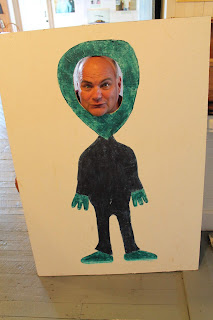 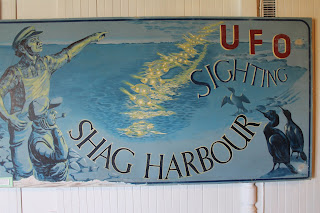 Extra! Extra! Read all about it!

Next to Roswell this is one of the best documented UFO case.

It was a great day.
Great friends, great weather. We stopped at the Dennis Point Cafe
for super seafood chowder.

The point of this post is that you should always check
out what's around you.
There's plenty of cool places right next door.
No need for exotic locales. There's plenty just around the bend. 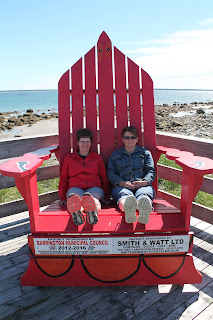 Here I sit in a coffee shop writing this post.
I never thought I'd see the day.
But I'm on vacation and Dave had an appointment in Yarmouth.
So I thought I'd try writing the blog in a different place.
Might make things more exciting.
Maybe people will think I'm important
sitting here with my tiny laptop, my iced coffee
(which incidentally I've just discovered I hate ice coffee. blah!)
pounding away at the keyboard.

Yup, I'm so important.
So far it's been a hot and muggy summer.
We've even had heat warnings.
Like today....that's why I'm in Yarmouth and not at home.
Yes I have air conditioned, but it's going to be hot as Hades outside.
So when I get home, I'm packing up the dogs and we're going to the beach!

It's also been a very dry summer. In the last 17 days we've had less than
2 mm of rain. Not good for the plants or the wells.
We are getting less and less precipitation every year it seems.
Even in the winter, less snow and rain.
We need the snow for the wells and the plants. Because snow is also water
and I know a lot of people complain about the snow, but it's good to have it.
Especially when the rain is almost non existent in the summer.

Aw man!!! Someone is smoking right outside the coffee shop and the smoke is coming inside.
ugh. gross and it's only going to get worse in October.....

Anyway I digress....
Despite the dry summer, the garden is doing very well.
Oh yes, I do have a few, what the heck did I plant that for moments.
But in all, it's doing really well. 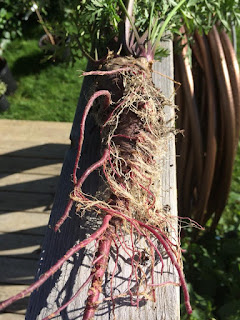 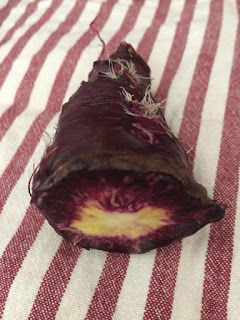 This is one of those WHY!?!? plants.
Black Nebula carrots.

The greenhouse has officially turned into a jungle.
It's churning out cucumbers, basil and green onions faster than they can be used.
The tomato plants are massive, but not many tomatoes on them. I've been chopping off leaves
so I'm hoping that'll help and put more energy into tomato making and not leaf making.
The peppers are really doing well. So well that we're going to have to stake the plants. I've never had that problem....
I have 3 different kinds of peppers in the greenhouse, Kalocsai, Biquinho, chocolate and sweet banana. Ok that's 4 not 3. the Kalocsai is also known as paprika plant, and they grow upright.Weird. 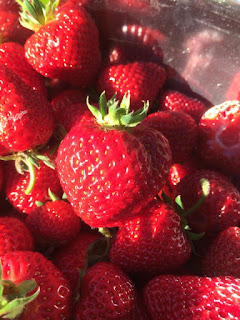 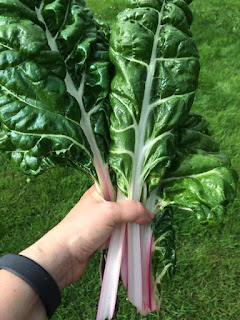 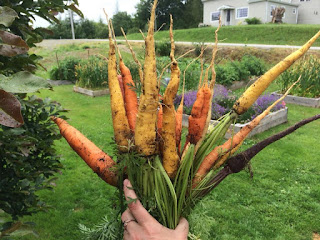 Rainbow carrots are actually very good! We now prefer them to regular ones.


In the raised beds I've been harvesting, Swiss Chard and Swiss chard and more Swiss Chard.
Note to self, only plant one kind of chard. Strangely enough, even in this heat it hasn't bolted.
Our strawberry plants have produced enough to feed us for 3 weeks
and make 6 quarts of freezer jam. 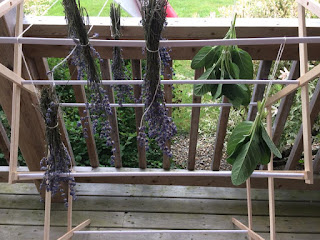 Found this clothes dryer and re-purposed it into a herb dryer.

I've been diligently collecting herbs this year and drying them. I'm usually slack on that part
and they go to seed. This year I'm on the ball. So far I've collected an entire 1 litre
jar full of chamomile, also some lavender and sage. I had planted cilantro to make salsa
but it's gone to seed before the rest of the stuff is ready. So I'll save the seeds to make coriander. 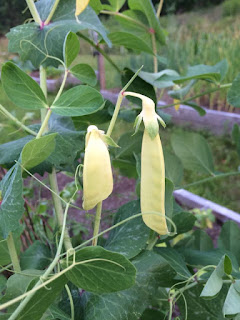 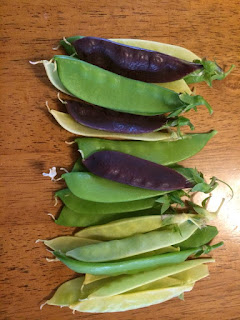 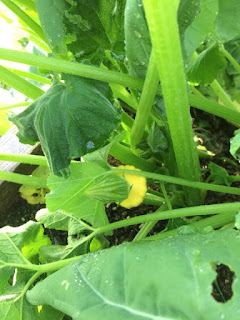 Patty pan squash. Haven't tried them yet. Next week they'll be large enough.


It was our 25th anniversary last week so we bought 2 rhododendrons
to commemorate the occasion. A red and a white one. They're going to be so pretty.

Well that's it for this time.
Have a Blessed Day!
Lisa