Yikes!
It's been crazy here.
And most of it has been from our own stupidity!

Like I said in my last post,  Azelle has a major case of mastitis on one side of her udder.
It might be permanent. We're not sure.
The vet said to give her till mid summer before deciding anything.
She was due on March 26. But she's always 5 days late.

I was there to help, but unfortunately the first kid was stillborn.
Not quite sure why, since he was the bigger of the two, his presentation was perfect and he was the firstborn. The second kid was ok. They were both boys.

That was the first kid we ever lost.
I guess we've been lucky.
We think that Azelle has a small bladder infection, so she's been on meds and pain killers for a few days.  Plus her mastitis.  Poor girl. We named the kid Christian since he was born on Good Friday.

Then Maggie was due on March 19th. The day came and went. Five days went by (and goats can be 5 days overdue without issue) She didn't look any worse for wear except  that she developed a vaginal prolapse.  The vet told us that it would probably be ok, but to keep an eye on her.  But I had absolutely no idea when she was due.
Obviously my dates were wrong.
Then Easter morning I go in the barn and through the stall boards I see 8 little extra legs!!! A boy and a Girl!!!

The boy might be sold already and we're keeping the girl incase Azelle's mastitis doesn't go away.

I had a full incubator of eggs that was going along tickety boo. When a few days ago I realized that everytime I looked in the turner had the eggs in the same position.
The turner wasn't working!
Crap.
I candled them and out of 42 eggs, 6 might be viable.

Then the chickens were free ranging a few weeks ago and got in the rat poison.
Double crap.

They went on meds to combat the rat poison (but we don't think they ate enough to do damage or only a few got to it). But in the mean time, since eggs are so porous we have to wait 6 WEEKS before eating them again!!! Holy moly!  Yet the guy at poison control says it should be ok to eat them anyway. But the vet says otherwise.  So we're going to err on the side of caution and wait 6 weeks.
Everyday I'm throwing out 2 dozen eggs.  I see the dollars flying away. Sigh....
Live and learn.

We also bought two pigs...Dave's idea. But they're going to be put in an area in the goat pasture that grass is not growing.  It will be fenced in so the goats can't get in.
This way the pigs will dig up that part and then next spring we can plant grass seed so the goats can graze on it.

We were planning a farm day in two weeks. But with all the issues we've been having with the animals we had to back it to mid May.
But there seems to be a lot of interest in my "Springtime on the Farm". Check it out on Facebook.
My only worry will be parking. We don't have a lot of parking here. One of my neighbours said I could use her driveway. I'm going to have to ask the other ones also.

Well that's it for today.
Have a Blessed Day
Lisa
Posted by Lisa at 3:11 PM No comments:

Since it's been a mild winter the girls have been roaming the property a lot.
They aren't permitted to roam it in the summer because they like causing destruction in my raised beds.  4 acres! And they have to go in my raised bed! 4 acres!
I mean come on!

But the girls this year have been very productive so I can't be mad at them too much.
The weeks that they would slack off, I would just gently mention two words..

oh and the other two words

worked amazingly well to get them going again. 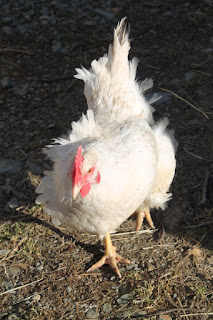 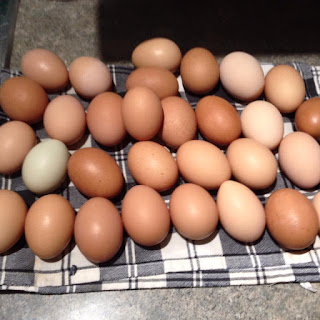 Yesterday, they almost all laid an egg! Nice going girls! 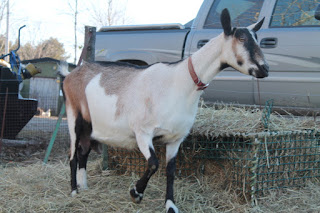 Maggie is due in 6 days

(even though she doesn't look it. She keeps her girlish figure right to the end. She carries well. No baby fat for her! Right to the gym after delivery! Goat Pilates I've seen her doing when she thinks nobody is watching.But she needs a sports bra.  I won't be telling her though.) 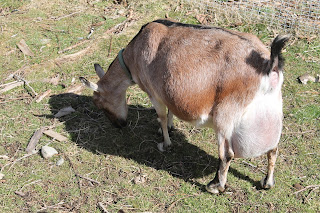 Now poor Azelle is due March 25. She doesn't keep her girlish figure. Azelle is having issues this pregnancy.  One side of her udder has gotten mastitis. And the vet figures it will be permanent.
We can be hopefully optimistic (the vets exact words) that next year she will go back to normal.
But when they get mastitis when they're dry it's usually permanent.

So it seems we shall be bottle feeding kids this spring. Ugh.
Since she is an awesome milk producer, she might be able to nurse both kids....
with our luck she'll have triplets.

Last Saturday we had a surprise.
I had no idea when Caith was due. I watched and watched and watched last fall for signs of heat and couldn't see any.  So that meant that either she was too young (highly unlikely) or that the buck got her while I wasn't there and her heat was short.  So I thought she'd be due now.  Then in January I saw her and the buck fooling around and I thought...oh no.  That means a June kid.
Then I walk in the barn last Saturday morning and there he was...
Stevie. 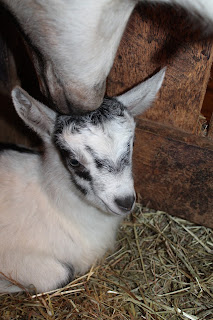 Here he is just a day old. 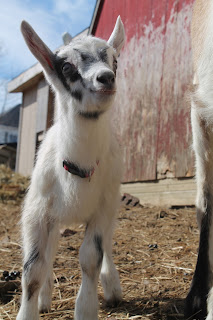 This is him yesterday. His first day outside with momma.
A whole week old.
Ain't he cute!


Jamie's bunny business has expanded a little. He got his first litter and 5 survived. They're ready to be sold as pets in a few weeks. He's hoping that they'll sell as pets because now he doesn't know if he can do the deed and use them as meat rabbits...if you know what I mean. 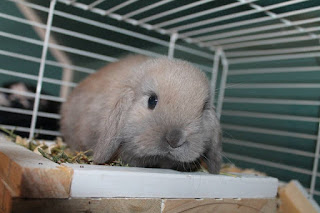 His birthday is this month and
he saw this little gal.  So guess what.  We have a new addition to the farm.
She stays inside.
He named her Caramel and she's a Holland Lop.
Friendly and cute as a button.

Ok, well one can only hope that it's shown up.
This winter has been super mild compared to last year's.

I can actually see the lawn.  Ok, the brown lawn.
But it will become green in due time.
Green and with two other raised beds...
heh, heh, heh.

Yes, it didn't take much convincing for hubby to agree to put two more.
Not after the horrible veggie prices this winter.
And it's planning on getting worse.
From what I've heard, it's not only here but everywhere.

Oh well, it's just a bit more work, but the taste and quality is better.
I'll be planting the regular things this spring.
Things like dill, carrots, beets, yellow beans, pumpkins etc...
But this year I'll also be planting...
Cucamelons!!!
Or Mouse Melons  I always try something different in my veggie gardens.
Sometimes it works...sometimes it don't.
I remember planting dill was something weird for me.
Well it does so well here, that it's now a staple in my garden.
Then again I've planted things I'd rather forget...as a matter of fact, I have forgotten it.
I can't remember it.  Oh! Potatoes.
Might seem like a normal thing to plant, but for the life of me, we cannot grow potatoes on our property. Which is a shame really. Since we eat so many of them.

So soon, hopefully my garden will look like this. 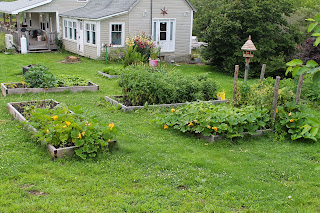 Something else I'm putting new in my garden this year...
a bee hive!!!
Woot!! Woot!
I'm taking the plunge.
I've ordered my bees and they should be ready for pick up late May or early June.
I'm excited and nervous.
I wanted to wait another year, but I say that every year.
Finally hubby said, "Just do it!"
So he called and ordered the bees.
No turning back now!
I really want to steer away from using sugar in my cooking as much as I can.
But buying honey for cooking is too expensive. And I have no maple trees to tap.
The answer...Voila!
Bees!
I want them to be as healthy as possible so I won't be taking their honey the first year and probably not even the second year.
I've got a lot to learn and I might even regret my bargain.
but I doubt it.

So stay tuned to see how this spring pans out.

Have a Blessed Day.
Lisa
Posted by Lisa at 3:31 PM No comments: