A few months ago I wrote an article and sent it to several magazines, including the one that had bought an article from me last year.
But I got rejection letters from all of them.
Saying it was informative, but more suited to a blog, not a magazine.
I'm not sure why. One of them the writing is exactly like this one.
Oh well...you win some, you lose some.

So I thought I'd post it here for all of you to see. 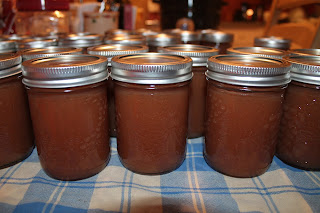 We've been called crazy, we've been told we've lost our minds. Some people actually say they admire us.  My friend keeps telling us to keep it up, Agenda 21 is coming. If you don't know what Agenda 21 is, Google it.

What are they talking about? Homesteading,  while holding down full time jobs. Homesteading, the new buzz word.  Yes, my husband and I both work full time outside the home and we homestead also. That's why people think we've lost it sometimes.  Well...most of the time.
It's hard enough homesteading when one doesn't work, works part-time or even works seasonal.  But throw in 45+ hour work weeks with crazy schedules and kids and we sometimes wonder ourselves why we do it.

I can tell you why we started doing it. Back in the day it was actually cheaper to do it that way. I am the ultimate tightwad.  We started off with a few laying hens and meat birds. Feed was cheap.  Guess what?! Feed is no longer cheap.  When eggs come on sale for $1.99 a dozen, you wonder why you're still mucking out the chicken coop on a beautiful ,summer Saturday morning instead of heading out to the beach.

Then there comes a time when you start to think of what you're putting in your body instead of saving your money for your children's inheritance.  Because honestly, what are they going to do with all that money you're going to leave to them? Buy expensive organic produce at the local farmer's market? We might as well teach them how to do it for themselves.

Homesteading from a kid's point of view is well...depends how old the kid is. Our son loved the animals when we was younger. When a piglet would die he would cry for days.  He'd love to help clean the goat stalls, pick up the eggs from the chickens, plant his own little garden.  Now that he's a teen  I'm lucky if he asks if the goats have kidded yet.  But I know someday all the hard work and knowledge will become invaluable to him.

To us, homesteading provides us with clean, good quality food. We know our animals are happy and healthy. No factory farms here. My husband is good at making things easier for us. Automatic waterers and feeders make life easier. Raised beds for the veggies instead of plots of land help with the weeds and the sore backs. Prevention is also key. Keeping your animals in top physical and mental condition helps with avoiding vet bills. That goes for equipment also.

Good homesteading is also knowing your limit.  How far are you willing to go mentally, physically, emotionally and financially. Use common sense, I know common sense is almost becoming extinct but it's still out there.  At the moment we have several goats, laying hens, meat birds, fruit trees and 7 raised beds for the veggies.  I, not my husband, would love to have fibre goats (even though I don't knit) and another 10-15 dairy goats.  Not going to happen.  We are almost at our limit with time, finances and land.

The only other thing coming on our property in the next year or so are bees.

But it's easy to get off track. I know, been there, done that.  It's good to write down your goals. Otherwise you might become like Sophia in that old sitcom The Golden Girls and digress.

Looking back throughout the years, reading old posts on my blog, I wouldn't change a thing.  We've learned so many things like, even though you only need a litre of goat's milk a week, she's still going to give you five litres a day. So deal with it! We also learned that we  are not full time cow people, but that's another article.

And we're still learning things every day. Like just this spring, I learned that a 150 pound goat that doesn't want to go on the milking stand, actually weighs 500 pounds when you try and pick her up!

Some days I look at my husband and tell him that we are selling everything and moving to Halifax in an apartment where someone else can grow everything and we'll buy it. Then I can keep our apartment clean and go to the gym to keep fit instead of pitching 150 bales of hay. He lets me rant for a while and then I go to the barn where I sit and hear the goats munching, burping and farting and think, "Man, this is the life!"

Email ThisBlogThis!Share to TwitterShare to FacebookShare to Pinterest
Labels: Homesteading 101

There's one small convenience store that does advertise on it and I just love their commercials.
One of the employees changes his voice and personality to make fun of the boss
and advertise the specials of that week.
It's really funny and gets your attention.

I thought I wish our store could do that.
But the only radio station we would be able to advertise is the local french station
which is just up the road from my house. (and most of our customers are english and don't understand a lick of french.)

So with that Agnes and Bernadette were born...I mean created.
Two elderly sisters.
My friend Susan works with me and she's also Acadian French like I am.
So she's Agnes and I'm Bernadette.

People love listening to the commercials on the radio.
We're not like the other store that makes fun of the boss.
That's going a bit too far and disrespectful.

But we're not opposed to insulting each other while we advertise what's going on at the store.
Like two little cantankerous old ladies are apt to do.

Then for the staff Christmas party, our boss approached us to do a little skit, to put faces to Bernadette and Agnes. And this way, the rest of the staff can see what we do.

That led to our P.R. person asking if we'd do "commercials" for the store's Utube account.

So here's our first two ads.

I hope you enjoy them.

Bernadette and Agnes with the Spin Mop

Bernadette and Agnes with The Heft

Two weeks ago we had to make an extremely hard decision.

It all started on a Sunday morning when I brought Emilie outside to pee.
She walked down the two steps on the deck and then just sat there.
She wouldn't move. Which is very strange for her. She's the hyper one.
Gone like a bolt of lightning usually.

So finally I got her to pee.
But when I came in I noticed that she was kinda dragging her hind legs.

I knew exactly what it was. IVDD

By the afternoon, she had no life in her back legs at all.

So I figured that since Simonne had had it the year before I would just make sure Emilie had plenty of kennel rest and I would bring her to the vet ASAP for steroids and cortisone shots.
6 weeks later all would be well like it had been with Simonne.

So Tuesday Dave brought her to the vet. I couldn't get her in on Monday, but they said as long as she was kept quiet in the kennel she would be fine another day.

The diagnosis was not good.
Surgery would not help. It was too far gone.
That fast.

We could have gotten a wheelchair, but she was miserable and her entire body was curved and stiff.

We made the decision to euthanize her. 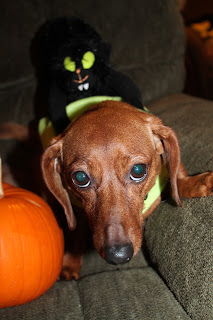 We cried all day. All three of us.
We still miss her.
The house is way too quiet without her.
Simonne misses her.
Simonne sticks to me like glue now.
She was always clingy, but now she's by me constantly.
She's never really been alone before.
I don't think she's liking it.
But she'll have to adjust.

Then it's bedtime and I think
"Crap. I didn't blog."

Or I'm in no mood to blog. Things have happened during the day and the mood has passed.
I need to be in the mood to write, probably like any other writer.

So I'm in the mood to write so you might find several posts in the next few days to bring ya'll up to speed on what's been happening.

Everyone is pretty ok on the farm.

In my opinion I have too many chickens at the moment. I'm getting too many eggs and for some reason no market for them.

We sent one of the wethers to freezer camp.  That's what we have them for, but it's still hard to do.  Jamie keeps telling me that I have to toughen up (strange, this coming from a kid). But my heart is tender when it comes to animals. I keep saying that I could become a vegetarian.
That's kinda hard in a family of meatatarians.

We're keeping the other wether for a bit longer. But he's got to go soon.

The twins, Kevin and Stuart were doing well and fitting in well, when Kevin got sick.
It started with a lung infection that would not go away. When it finally went away he started with skin infections. Contagious skin infections that should have gone away on its own.
But after months and months of treatment and it just kept getting worse. We had to make a decision.
He had to be put down.  The vet thinks that because he was smaller than his brother, he might have had immunity issues to start off with. Then when he had a lung infection it was the last straw with his tiny ,immune system.  With the vet's help, we even tried fixing him from the inside out. Trying to fix the underlying problem.  But it didn't work.  We think he was too far gone.

So Kevin is running in greener pastures at the moment.

While the vet was here one day for Kevin, I asked if he thought Peanut was ready to breed the girls because I found he wasn't looking too "bucky".

The vet said that I might have to look for plan "B" for this year.
We were devastated. And so was the rest of the goat community in the area that counts on our Alpine buck for breeding. We were all thinking that we were going to have to deal with airplane ears next spring (yes we are goat snobs).

Then I started counting the days.  Maggie came in heat first.  21 days after, no heat!
A week later Azelle came into heat. 21 days later...no heat!!! And with Azelle this meant that she had completely healed from her difficult delivery.

So this means that we will have babies next spring with NO AIRPLANE EARS!!! Woohoo!!
I cannot wait to see what cute babies we'll have next year.

So I guess Peanut's looks are deceiving.

We're not sure about Cait yet.  I haven't seen her come in heat. So I'm not sure if Peanut did his duty before I could even notice she was in heat. Or maybe she hasn't come in heat yet.

I'm hoping for the latter.

So that's the update for the farm.
Pretty boring stuff. But at least you're up to snuff on that.

Have a Blessed Evening
Lisa
Posted by Lisa at 9:15 PM No comments: