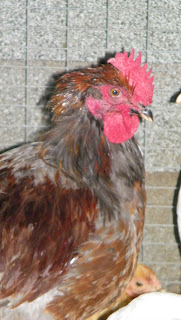 I've been wondering if it's an early Easter here? I seem to have to go on an egg hunt every night when I go in the chicken coop! It's not that they hide them all over the coop, they just cover them up with the hay. They never used to do that. I've had to take all the hay out to find all the eggs. Animals can be so strange. So after I found the eggs, I replaced the hay.
As for the goats...what kind of animals poops in their water? I've talked about this before, but it still amazes me that they do it! I mean, goats are intelligent creatures, aren't they?, so why would they crap in their drinking water? Personally, I think they do it to tick me off! Tonight I just peeked and their bucket was still full, so I yelled to Dave that I didn't need water. Then I went right in the pen and they had pooped in it! I just hadn't seen it. Strange thing is that they won't do it in the summer with the automatic waterer. Weird, just plain weird.
Febe is getting very big. I think this year she may have triplets or very big twins! Last year she wasn't this big in this stage of her pregnancy. This could be interesting and exciting!
I have a chance to buy a pregnant doe, but I'm not sure if I should. I want to but I don't. I really want to just get purebred goats and this one isn't. I could trade a piglet for her, but also, I really don't have the room and for the first few months I would have to seperate her from Febe and Whisper because Febe would beat the heck out of her and I don't want to cause a miscarriage in either one. But I could use the extra milk this spring. Man, it's a hard decision. I have to pray on this one a bit longer.
I put my back out this week. Well really I put it out a few weeks, but it seems better, then Sunday it went out again. I guess lifting a 75 lb goat on a milking stand doesn't help either.
Ahhh...what to do , what to do....
We had the second week of our church small groups. It was interesting. I'm learning alot more about the Bible. I'm in a good group also. Dave is in a different group, this way, we don't need a sitter for J.
Well I guess that's about it for this week. I'll just have to think on this for a while longer.
Have a Blessed evening
Lisa
Posted by Lisa at 9:11 PM