This time last year we had 5 cats. Now we have 2. We only have one in the house now. Binoo. Daisy is gone. She chewed her last electrical cord. That's all I have to saw about that. 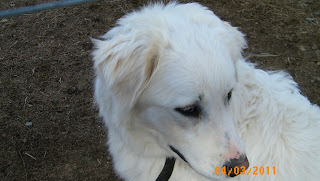 Outside we had Shadow, Tootsie and Duke. Now we only have Duke. What happened to the other ones will remain a mystery. Again, we figure coyotes. Now that we have Tundra we don't see them on the property as much anymore, but the cats don't stay on the property. They like going in the woods. That's where the problem lies. The coyotes are just pacing and waiting to come on our land. Dave heard them yesterday morning and they were close. I heard one after supper. It's still light out. They don't wait for darkness anymore. 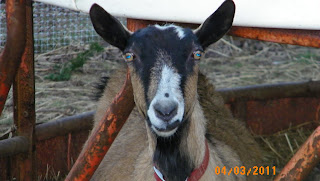 Febe giving me some lip and the evil eye!
Today Dave was a busy little beaver. He remodeled the goat pen. It used to be one big one and one tiny one. Now it's three regular size ones. Febe wasn't letting Cindi Lou eat enough so something needed to be done. I was also concerned when the kids were born. Was Febe going to be aggressive towards Cindi's kids. Hmmmm...yup. So this will be better. I moved them tonight. Tommy is freaked out, and Febe is not a happy camper. Cindi Lou is happier than pig in slop! Or happier than a goat in a briar patch! She can eat what she wants, when she wants, as fast or as slow as she wants! Happy goat! 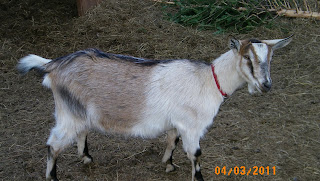 One happy Cindi Lou, ready to eat to her little heart's desire.
We got two calves for our winter beef. We've been bottle feeding them like we did last year. We were only going to have one, but Dave had called two dairies. One called and we picked up calf number one. He was huge! Then three days later the other dairy calls. So Sunday we went and picked up calf number deux. This one was small. Honestly I have no idea what we are going to do with two of them. One is enough. We'll probably end up selling one of them.
Oh their names are Mooocher 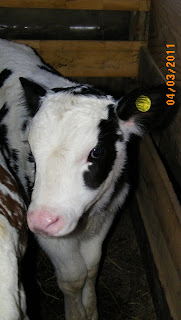 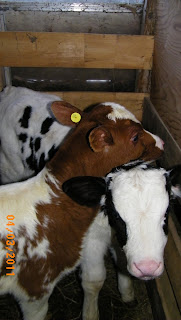 How on earth can anyone eat a steak called Teddy?
Well I don't think the eggs in the incubator are doing anything. I've been candling them but all I see is a big mass on just one side. Strange. It's in almost all of them. This doesn't sound too promising. One week to go.
Well that's it for this week.
Have a Blessed Day
Lisa
Posted by Lisa at 8:13 PM