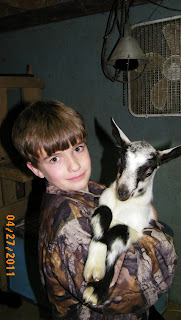 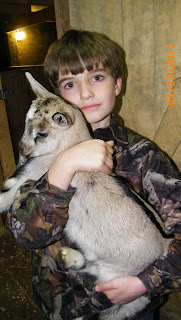 Sweet Azelle
Last week it was so cold that we were wondering if spring would ever show up!
Then the rains began...and continued....and continued....and are still continuing! Monday was actually a beautiful day. It was the only beautiful day we've had in FOREVER!
On the up side going to the barn makes a wonderful squishy sound.
May 6, 2011
I have been trying to get to this blog now for a week or more and I can't seem to find the time.
Easter has been here and gone. It was nice. We had a nice service at church. We even formed a small choir for the day. My mom made a nice glazed ham. 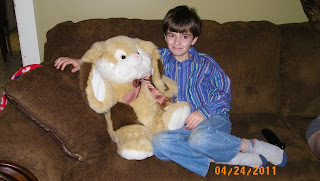 Annual Easter photo. My baby is growing up!
I took our annual Easter photo with J.. He got that bunny for Easter when he was 3 weeks old. So every year I take his photo with it. The first year, the bunny was holding him! Now he's holding the bunny.
Cindi Lou was due on the Saturday before Easter. Well she waited till the next Friday while I was at work. 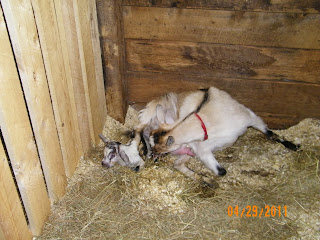 Half way there!
Dave called me at work. This is how the conversation went,
Dave: "You'd better come home NOW! "
Me: "Why? What's wrong?"
Dave:" I think you're goat is having her baby and I don't know if what's going on is normal."
Me:" Ok, I'm gone!"
I literally flew home. In the 3 years or so that I've had goats, I've yet to see a goat birth. I have no clue what is normal and what isn't. 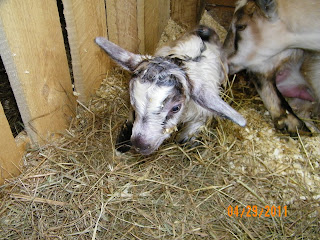 I'm Out! I'm Out!
So after a tense 2 hours and several phone calls to our pastor (no, not for prayers, he used to be a dairy farmer) and lots of crying (me and her) Cindi Lou gave birth to a bouncing baby boy! We knew she was only having one. We named him Prince William since he was born on the day of the Royal Wedding. 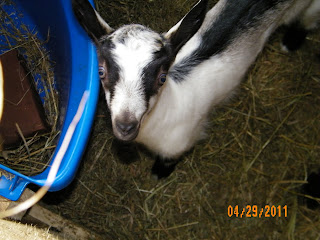 Oreo wondering what all the commotion is about? 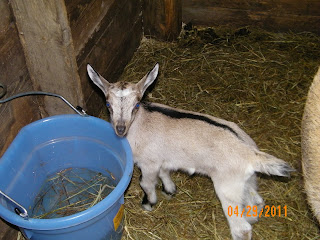 Azelle thinks it was much ado about nothing. 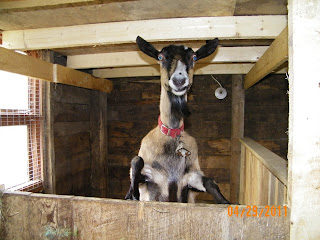 Ok, If I don't get all the attention here soon, I'm not going to be impressed!
We have three new critters to the farm. Three sweet kittens. Two black ones and Dave picked up another one last week. He's a tiger striped. The black ones are called Sylvester and Junior and the other one is Tigger. Don't forget, it's a 10 year old that named them. 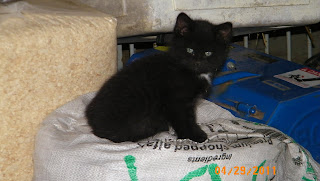 Sylvester! Or is it Junior?
Febe has been giving us so much milk that we don't know what to do with it. I had been milking her once a day since the kids are only nursing from one side. So one goat is actually supplying two kids, a family and a bottle fed calf and I still have a fridge full of milk!
But the last few days I've been noticing that her milk had a pink tinge to it. Yesterday was really bad and really nasty. It smells normal and tastes normal, but it's really ewwy knowing that you're drinking blood. Yuck.
We called the vet this morning. He figures that she's burst a blood vessel in her udder. It's nothing serious but we have to milk her at least 3 times a day and take the kids away from her and bottle feed them. This is going to be fun. Not. It's going to be crazy around here.
Well it's bed time.
Have a Blessed Evening.
Lisa
Posted by Lisa at 7:19 PM