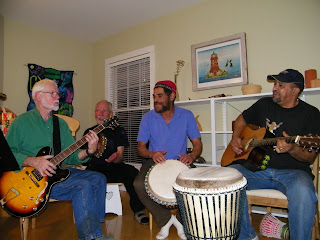 Ok, I know, I know...
I'm weird, I'm a bit strange. I know this and some people might question my beliefs, but on December 21st we were invited to a winter solstice gathering. Definately not your usual, normal Wesleyan church gathering. 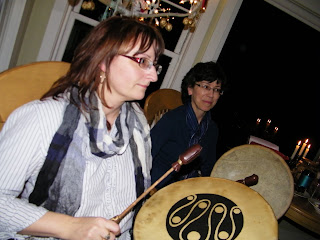 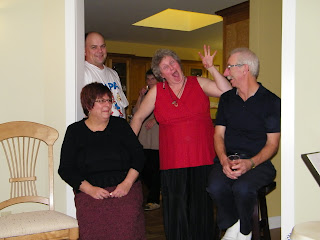 I have a strong belief in tolerance. As much as I wish we were all born again Christians, I know it's not going to happen. So we should learn about one another and each other's beliefs. Maybe, just maybe if everyone held to this way of thinking there would be a lot less wars.
Maybe, maybe not. 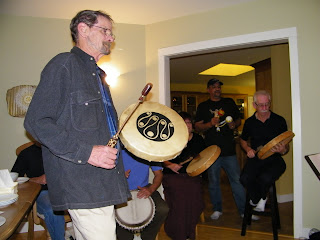 Having said all this, I would not have attended this gathering if I wasn't strong in my faith and Christian beliefs. It's so very easy to be swayed. I know some of my Christian friends will wonder if I've gone off the deep end.
Nope. 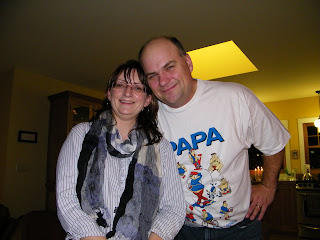 Me and hubby
We did find it was a bit strange at first...but we knew most of the people there. We got there a bit late because I was working that day. We had a bite to eat and listened to the music and the drumming. The drumming was very soothing. I know, when I say that people think "How on earth can drumming be soothing." But it really was. After a while we joined in. They had some spare drums.
This summer we'd like to host a drumming session in our backyard.
When we first got there I told one of the women that I had half jokingly told my work colleagues that I hoped that we didn't dance naked around a bonfire! She said, "Oh heavens no! Not this year. It's raining out. Maybe next year." Then she said, "Just kidding!"
Phew!
So...did I like this gathering? Yes! Did I find it a bit strange? mmmm yes. Would I go again? Oh Yes! Most definately. Am I crazy? Oh yeah. So what else is new.
Have a Blessed Evening and a Merry Christmas!
Lisa
Posted by Lisa at 9:05 PM