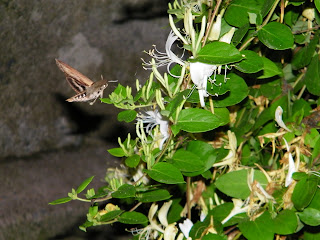 For several weeks now I've been noticing flying objects in the honeysuckle vine at night. I thought they were hummingbirds. They were smaller than the hummingbirds but they sucked the nectar the same way and hovered like them also. But they had antennae. 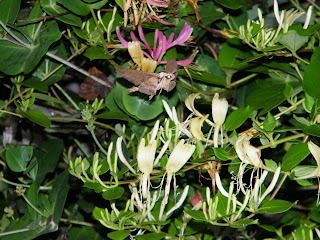 Notice the tongue. It's so long!!
So I got up close and personal with them. Googled them. They were hummingbird hawk moths. Well that's what I think they are. They are soooo cool! They're just as good photo subjects as the chickens!! One night I thought, "I should try photographing them." So last night I did. I got a few good shots.
Some people drive me nuts!
We thought we had Whisper sold. The guy said he was coming back tonight and he was a no show. That just burns my butt! No phone call, no explanation, nothing! Nada! We called him and all we get is an answering machine.
Febe's milk production is going down. I'm not sure if it's the heat or what. She has a lump in one of her teats. It's not getting worse, but I'm wondering if it's not blocking a milk duct. I've tested her for mastitis and it's negative. She's got no fever, so it's not an infection.
Cindi Lou's poopies are back to normal. I dewormed everyone and it seemed to help. I'm telling you, these goats are going to be the death of me. My ulcer is coming back to haunt me and I'm wondering if it's not the goats. 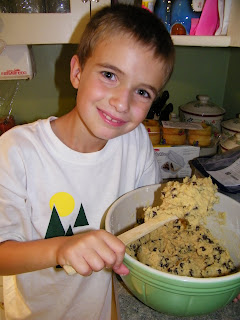 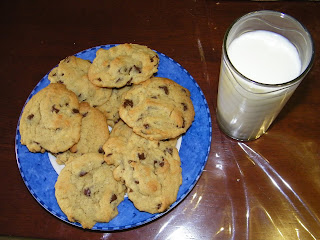 Goats milk and warm cookies!! Yummm!!
My mother visits a little old lady that lives by herself. She's blind in one eye and can hardly see out of the other one. All she eats are cheap TV dinners (she says that's all she can afford, not really.) So when my mother can, she brings her a few meals. J. goes with my mother when she goes. So he wanted to bake something for her. Last night we baked some chocolate chip cookies. Well....ummm...most made it to her. 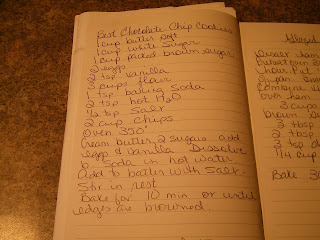 Recipe for cookies
I thought I'd take a few pig photos. I seemed to have a very willing subject. After every shot, she'd change poses. It was so cute. 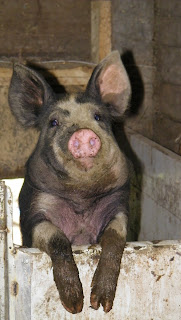 Have a blessed evening.
Lisa
Posted by Lisa at 9:57 PM