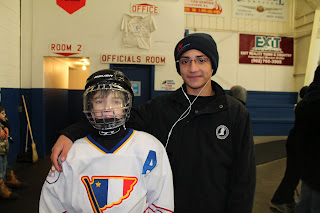 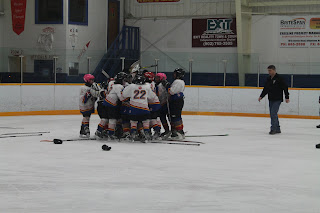 They were third from last and they got the GOLD MEDAL!!!! Well needless to say you have a bunch of proud parents in the area tonight! It's amazing what you can accomplish when you put your mind to it. 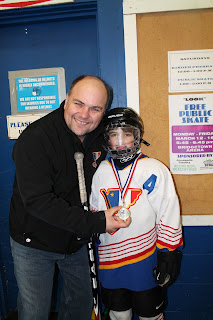 Proud papa and kid
The thing is that yesterday their only goalie was dog sick with the stomach flu! Not good. We had everyone on Facebook praying for a quick recovery. He was there this morning, ready to play. Now don't tell me prayer doesn't work!
I've always said I didn't want J. in hockey. It's too expensive, time consuming and I knew I'd turn into the dreaded HOCKEY MOM! and Dave into the HOCKEY DAD. Well guess what?! I was right on all accounts. It is too expensive,time consuming and we did turn into the dreaded hockey parents. Oh well... J.'s loving it and it's actually something he's really good at. But it's still hard on the nerves when you watch them play and the game ends up 2-1! 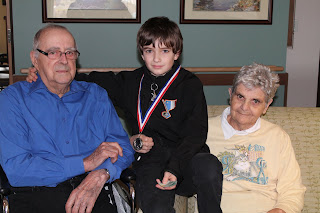 J. and the grandparents.
We stopped on our way home to visit Dave's parents in the old folks home (yeah, I know that's not politically correct). They were so proud. 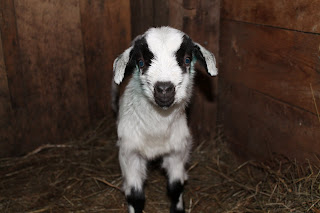 Pisnak.
Friday we got our little buckling delivered from Sussex, NB. We called him Pisnak. He's an Alpine wannabe Nubian. His ears were upright when he was born, but they're not sure if it's the extreme cold that knocked his ears down or when they tattooed him. But whatever the reason, it's not genetic and he's healthy otherwise so he's our new stud for this fall. It's not like he's going to be shown in goat shows or anything. So we took him anyhow. It kinda gives him character.
Well speaking of Pisnak, I have to go bottle feed him and then go to bed. We are pooped. Stressing over hockey games tires a body out!
Have a Blessed evening
Lisa
Posted by Lisa at 8:49 PM