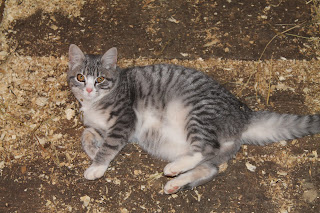 Antonio not happy to being ignored 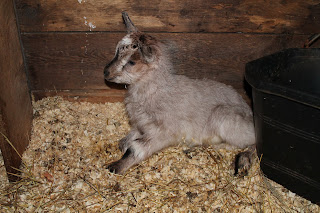 The first and biggest girl twin
But you gotta love them. Between us and our friends at Two by Two farm we are going to be pretty much vets by the time we are done being goat farmers.
It all started when Febe was due on Feb 12th. Cindi was due on Feb 14th. By this Sunday Feb 19th, Febe was waaaaaaaayyyyy overdue. So I called up the vet on Sunday. These were my options
-I got my dates wrong (which was highly unlikely since the buck didn't get out after that week and I saw him mount her)
-She had a dead baby in there.
-She wasn't pregnant. 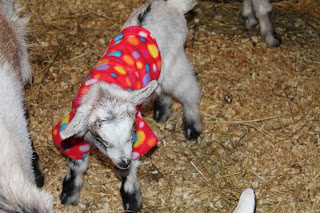 The smaller girl twin in her new goat coat made by Texan.
The last one was not an option I wanted since breeding season for Alpines is done for this year. If the baby was dead from natural causes (umbilical cord wrapped around the neck) she could be left like she was for up to a month before the vet would have to come and induce her (as long as she didn't show signs of fever). If it was dead from infection then it needed to be done asap. She wasn't acting sick so if this was one of the reasons then we didn't have to panic too much yet. 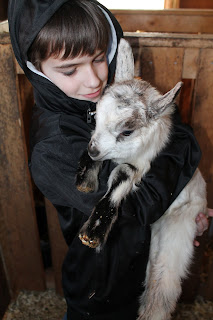 Then there was the option that she wasn't pregnant. Really the only way to make sure was with an ultrasound. I wasn't going to get the vet to drive 2 hours on a Sunday to diagnose that. I'm not that crazy. But he said since I was so sure on my dates that if I went and checked her teats for milk that could decide if it was a false pregnancy or not. If liquid came out clear or like apple juice, she wasn't pregnant. If it was whitish she was. I went out, one teat was completely dry...the other clear. I was devastated. 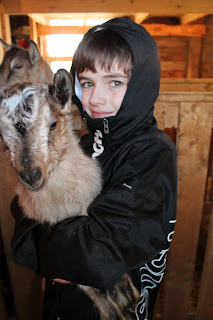 This meant we had to induce labour for the false pregnancy ( faux fardeaux as it's called in Acadian French), then wait awhile and then induce a heat. So that meant babies in August.
So the vet said he'd be down sometime in the next couple of weeks.
I went to the barn to check on the gang and Cindi Lou had had her first baby! That quick. Not like last year when it took forever. So I went inside to get the supplies and when I got back there was the second one!
They didn't look overly big, but when we weighed them, one was 11lbs and the other 10lbs! Both girls!! We've never had twin girls before. Yay Cindi!
Tonight I went to check on them, when Dave says, "Uh...Febe's udder is mighty big!" I'm like huh? So we get her on the milking stand and don't ya think!...there's milk in them thar udders!!
So either this is the immaculate conception of goats or the buck got her at the very last minute (and I'm talking seconds here) I separated them.
Goats...I'll never understand them.
Have a Blessed Day
Lisa
Posted by Lisa at 8:57 PM