A few years ago I brought the
garden club to a local blueberry grower so
he could teach us the art of trimming
blueberry bushes.
That year even though it was late in the season to trim I
gave mine a go.  My main older bushes had never been trimmed.
EVER!
And they were over 25 years old.

I remember he told us, if
you're not crying while you're trimming
you're not doing it properly.

Well I did cry, but it needed it
and the plants were better for it the next year.

Tonight I was a bit bored and I know,
it's late in the season to trim the bushes but
I decided to give the larger bushes a haircut.

I took a picture of the before, but I didn't
take one of the after since you really wouldn't be
able to tell the difference. 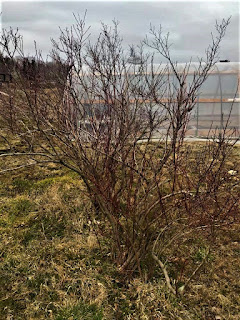 I really only trim the dead branches, branches that
are crossing and will rub and diseased branches. 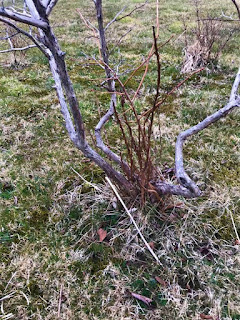 And also these nasty appendages.
Witches brooms!
What a pain in the butt they are.
And you need to take them out. Pronto!
They suck the life out of your
plants.

We have about 15 high bush blueberries
here on our property.
We love blueberries.
Our soil and temperature in this area is
perfect for blueberries or anything that
needs acidic soil. 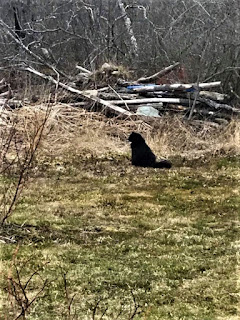 As I'm trimming, my shadow is following me and keeping
the rodents at bay.
Duke is my garden buddy.
When we're outside he's not far. 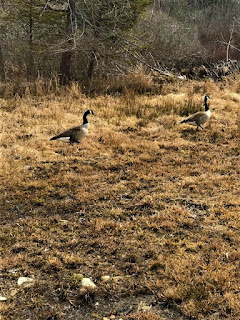 We also have a new couple that moved in with
Mr. and Mrs. Duckworth.
Canada Geese.
It's cool to watch them.
Mr. Goose makes sure his
lady is well protected when she eats.
He stands guard so she can dine in peace.

I hope they stay and raise a family by our lake.
I just hope they don't bring all their friends.
Because geese poop is HUGE!
Holy moly, it's bigger than our dogs'
poop! Dave tells me I'll have
to start pooper scooping the geese poop
while I scoop the dogs' poop.

I found a place that sells Hellebores online!
So I ordered two, a black one and a white/pink one.

We are also going to start blackberries and raspberries
this year. We have the wood ordered for the beds.
I can't wait.

We have also decided to raise meat kings again this year.
We haven't raised some in a long time but we're going
to raise some this year.
The meat is so much better.  It's not necessarily
cheaper than the store but it's tastier.

That's about it for today.
Have a Blessed evening.
Lisa