And once again, the vet comes to Spring Peeper Farm. 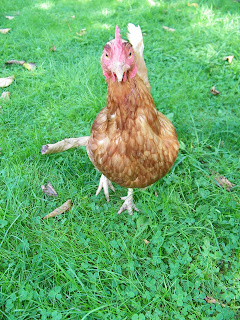 You are getting sleepier....and sleepier...now when I snap my fingers you'll cluck like a chicken.

Ok, I'm pretty sick of seeing the vet. The last time we were at his office I told them that I hoped that I would not have to see them or talk to them for a very long time. Maybe a Christmas card. Maybe. 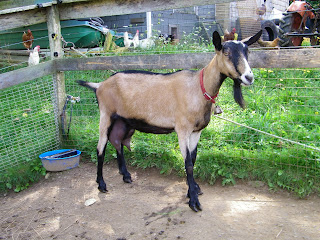 Well guess what! Febe's joints are starting to creak and crack. I can tell when bad weather is coming. She starts to limp, bad. A few weeks ago we had a couple of days rain. I practically had to carry her to the barn. She was bad. I'm suspecting CAE. 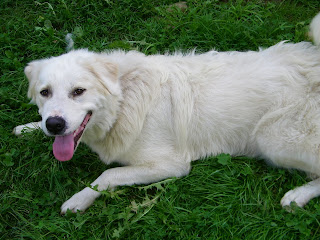 We called the vet, again. He said the next time he was down, he'd stop in. Don't forget, he's 1.5 hours away, so unless someone's dying, we wait till he comes down for a mink rancher and we share the mileage. Also, we are now a registered farm, so we will come for us. If we weren't a registered farm, he wouldn't even think of coming. The expense would be too great for us. But anyhow, I digress. 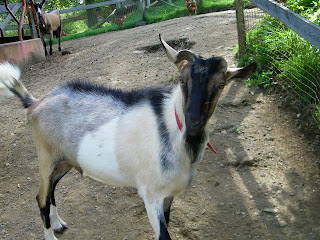 He's suspecting CAE also. So he came down to take blood samples of all three to see who has it and who doesn't. Cindi Lou is supposed to be CAE negative. Tomi we don't know.

Oh and before I go any further, CAE stands for Caprine Arthritis Encephilitis. I think I spelled it properly. Rumours abound about CAE, like it's contagious from goat to goat. The only way to stop it from spreading is to take the kid away from the mother before it even hits the ground. Not even let her lick it. They also say to pasteurize the milk before giving it to the kid. Another rumour was that it could pass on through a CAE positive buck.

Well the vet told me the alot of research has been done on CAE these last few years. So here's the truth.

-It's not contagious from goat to goat
-The only way a kid gets it is from the mom's colostrum, not the milk after, not from being licked by the mom etc...
-Bucks cannot transmit it either.

SO, that being said. The vet said that if perchance, Febe comes back positive and Cindi, negative, I should breed Cindi first. Save some of her colostrum and when Febe's kids are born, feed them Cindi's colostrum and throw Febe's colostrum out. Phew! Does that make sense? Clear as mud.

Because we love Febe and if she has a doeling, we want to keep one to replace Marygold.

But, this still doesn't help Febe and her creaking and pain. So I did a little research of my own before the vet even showed up. I found a natural remedy called Arthritis and Joint support on Fiasco Farm. It's been formulated for goats with CAE. 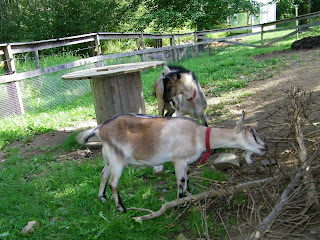 I ordered it (it came quickly considering it's from the States) and I had it when the vet showed up. I didn't give any to the goat until I got the OK from the vet and he said it should work great. He said with the ingredients it's also no milk withdrawal and safe on pregnant does. The stuff he would have given me, he said I wouldn't have ever been able to drink Febe's milk.

So hopefully it works. So far I just spread it on her grain and she eats it, but I'm going to try and make dosage balls to see if she'll take it better.

Well chickens are funny creatures. Because of them, my blueberry patch is pretty bare. Here's why...... 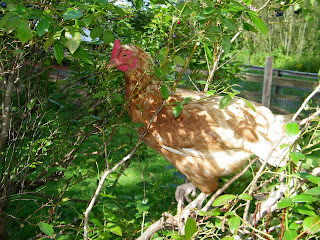 I don't have a partridge in a pear tree, I have a chicken in a blueberry bush.

Have a Blessed Day