Our yearly trip to Halifax 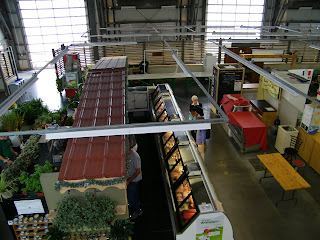 Very barren market.
It's that time of the year again. School clothes shopping. This year I wanted to go to the Halifax farmer's market. The website says that it opens at 9am, so we got there around 10am. Hardly anyone was there! Vendors and customers alike! At our market it opens at 9am and all the vendors are there at least 30 minutes before. Most of the vendors only showed at 11am. By noon it was starting to be busy. It was international day. I ate a buckwheat crepe with mozza, tomato and basil. It was really good. J. and Dave ate spicy Thai and chicken noodle dish. They liked it also. 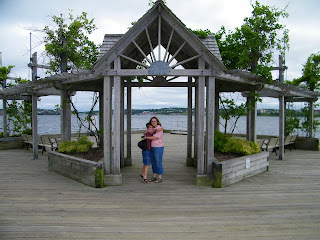 We liked this style of arbour, so Dave's going to build me one for my grapes.
I bought a pair of earrings and that's about the extent of our shopping. We did walk on the waterfront and bought a bedazzled frog. We also saw goat's milk soap at 20$ a bar. Mind you it was wrapped in cashmere yarn, fur...whatever you want to call it. But still... jeesh!
I'm not sure if I'll be going to that market again. I think my favourite one is in Annapolis. I find, that's the one with the most variety and people. Our's can aspire to be like the Annapolis market. Maybe some day....
Well, my brain never stops. The brain activity is constant, even while I'm sleeping. So while I was on the ferry from New Brunswick a few weeks ago I spotted an article in an old magazine. It was talking about Haskap berries. This struck my fancy. I made it my mission in life to get some Haskap berry bushes. I called every nursery around and nobody had heard such a thing.
I finally found two in the Annapolis valley that had some. One nursery would only sell them in 3 weeks from now and they were 25$ a bush. Ahhhh...nope. Too much. This nursery is notorious for their overpriced stock.
I called the other place. They had some and would sell them now! So on the way home we stopped in. AND they were only 15$ here! Woohoo! I bought 3 bushes, since you need two varieties for cross pollination. We also bought a few blueberry bushes since some of ours have died in the last few years.
So check out this site if Haskap berries strikes your fancy.
Oh, I almost forgot...our son made his first Kijiji purchase. This is what he bought. My son the Nerf addict! 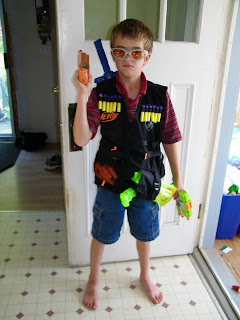 Have a Blessed day
Lisa
Posted by Lisa at 9:14 PM